One Man, One Vote over All 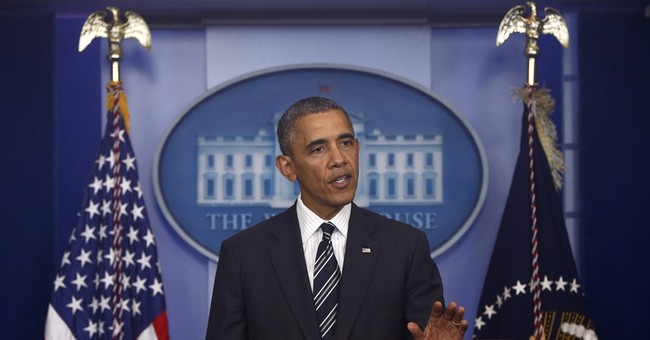 When Bill Clinton jumps off the bus over embarrassing prevarications, you know it’s getting serious.

The former president’s rebuke last week of President Obama for repeatedly lying to Americans that they could keep their health insurance policies under Obamacare shows that the Comeback Kid still has an acute ear to feel our pain. Also, that he’s prepared to throw anyone under the bus in order to get back into the White House behind Hillary’s skirt.

There is rich irony in a sitting president being lectured for his lies by a predecessor known mainly for cheating on his wife and pondering aloud the meaning of the word “is.”

It was enough to prod the current White House occupant to admit last Thursday that he “fumbled” the rollout and might not have been as well informed about his plan as he would have liked. Someone should have told him that he was lying!

The most striking part of his press conference, however, was the announcement that he was unilaterally suspending enough of the plan so that people could keep their current (or just cancelled) insurance policies for another year. Really? We are once again a free people, able to contract our own coverage? But only for another year?

How did we get to the point where one man has this kind of dictatorial power over his fellow Americans? The Constitution’s Article II, Section 2 requires the president to “take care that the laws be faithfully executed” – not just the ones he likes at any given moment. This president not only ignores laws but makes them up as he goes along, since “we can’t wait” for Congress to act.

He cannot legally ignore enforcing the insurance aspect of Obamacare any more than he can suspend the employer mandate without congressional approval. Yet, he has done both with impunity.

For their part, certain clueless Republicans are trying to save the American people from the Democrats’ folly by offering a legislative fix behind which frightened Democrats could hide. The prospect of changing the GOP’s status from perennial, gracious losers to a party holding four aces might just be too daunting.

As Obamacare implodes, all sorts of people are scrambling for safety. It isn’t just the six Democratic U.S. senators who voted for Obamacare and are up for re-election in 2014 in states that Mitt Romney carried. It’s California’s Dianne Feinstein, who isn’t up until 2018, but is getting an earful from the more than one million Californians who have seen their health policies disappear.

If I were a Republican paid advisor – and you know I’m not because I’m not collecting millions of dollars for showing them new ways to lose by “moving toward the center,” I would advise them to do two things.

First, get out of the way. You have no fingerprints on this. Not a single Republican in either House voted for Obamacare, unless you count Maine’s then-Sen. Olympia Snowe’s crucial vote in 2009 to get the bill out of the Senate Finance Committee. The government shutdown is already forgotten, but not Sen. Cruz’s remarkable speech drawing a bright line in the sand.

That 21-hour tour de force was about much more than the immediate, doomed vote to defund Obamacare. It was about educating the American people for the long haul and drawing bright lines between the two parties. The pundits who say you should never try such a bold tactic unless you are already assured of victory should acquaint themselves with the Battle of Trenton.

We live in a nation that still depends too much on a “mainstream” media composed of liberal scribes and radical leftists who never recovered from the brainwashing they got at Harvard Yard. It has gone beyond mere bias to a shockingly obvious daily assault on traditional American values and free market principles. When a mule this stubborn is blocking the road, you need a Cruz missile.

Do not try to fix what is entirely a Democrat-hatched abomination for which the American people will soon express their gratitude. Delaying or easing the pain lets the perps off the hook. The only thing that makes sense right now is another vote to defund the entire monstrosity.

Second, dust off those good ideas for free market health care reform that were ignored or trampled by the media in their single-minded pursuit to jam Obamacare down America’s throat. Doing nothing is not an option after Obamacare collapses. There is real pain and suffering out there among people who lack insurance, which is why Obamacare became attractive to so many.

Dr. Ben Carson has made an eloquent case in his Washington Times column for the power of health savings accounts and other ways to remove the middleman between doctors and patients. Other GOP ideas include flat and universal tax credits for coverage, tort reform, sales of insurance across state lines and reform of Medicaid, giving states more flexibility to ensure coverage of the poor. Access can be improved without wrecking the system we already have.

Now, here’s some free campaign advice for Democrats, which is much simpler: “Obama who?”