Who Are the Real 'Extremists?' 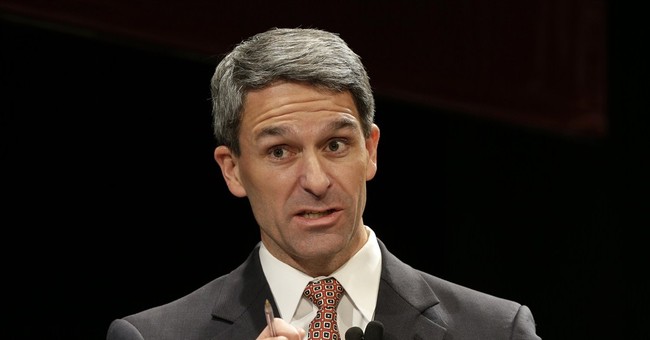 "Too extreme for Virginia."

That's what millions of dollars' worth of Democrat campaign ads say about Republican gubernatorial nominee Ken Cuccinelli and the rest of the GOP ticket in Tuesday's off-year election.

When they're not "waging a war on women," the dastardly Republicans are kicking orphans into the snow, stealing apples from lunch boxes, pushing old people off cliffs and pausing only long enough to have wild tea parties.

This is only a slight exaggeration of the Democrat campaign ads. Faced with a public that is connecting the dots between the Obamacare disaster and its enablers -- Democrats further down the food chain -- the Dems' campaign team is reaching deep into their bag of fear.

Do both sides do it? Of course. Flyers and campaign ads for Republican and Democratic candidates feature unflattering photos of their opponents and grim predictions of a hopeless future if the awful opponent is elected.

In this game, Democrats clearly have the advantage. They love a good fight, and they're skilled in the art of name-calling. Remember when Senate Majority Leader Harry Reid called peaceful Tea Party protesters "evil mongers" while giving a pass to the vandal-heavy Occupy crowd?

The GOP's idea of a good defense is the protective crouch. Candidates fend off reporters by ceding moral ground and trying to appear harmless. The well-fed establishment consultants tell them that this will attract the elusive "independent" voters. It doesn't. It just depresses the GOP base, as it did in 2008 and 2012. The exception might be in a union-heavy, Democratic state, like New Jersey.

The danger is that GOP strategists may draw the wrong lessons for the rest of the country if Gov. Chris Christie wins big in his re-election race on Tuesday. Keep in mind that the Dems have spent a fortune airing 10 times the number of TV ads against Cuccinelli than his campaign has aired. In New Jersey, spending on legislative races has reached record levels, but little is going to Christie's opponent, Barbara Buono, whom the Democrat money men obviously regard as a lost cause.

The defensive crouch -- which Mr. Christie often admirably avoids but to which he reverts on social issues -- has been the GOP default for so long that many Republicans were scandalized by Ted Cruz. During his marathon floor speech for defunding Obamacare, the Texas senator incinerated the handful of Democrats who tried to trap him. We are so accustomed to Republicans putting the car in reverse that it was bracing to see Cruz instead put the pedal to the metal and run over his opponents, in gentlemanly fashion, with inconvenient truths.

Until very late in the Virginia campaign, Ken Cuccinelli seemed to be following the strategy that doomed John McCain and Mitt Romney, among others, which is allowing the false charge of extremism to go largely unchallenged.

Mr. Cuccinelli is a principled conservative and an effective attorney general respected by many of his peers across the country. The steady stream of "extremist" attack ads from his opponent, Terry McAuliffe, however, may well persuade enough Virginians that Mr. Cuccinelli is "dangerous." But who are the real extremists?

Does wanting to place every single American under socialized government health care make you a "moderate?" Does opposing this make you an "extremist?"

How about opposing tax increases? Is that "extreme?" Or favoring voter photo ID laws? We're told that enacting such laws is not only "extreme" but "racist." How about believing that marriage is the union of a man and a woman? Too "extreme" for Virginia?

Ever since the GOP-controlled Virginia legislature in 2012 passed a law requiring abortionists to give women ultrasound imaging before an abortion, Democrats have had a field day accusing Republicans of being "extremists" who want to force women to have "transvaginal ultrasounds." The Democrats are fine, of course, with "transvaginal abortions."

The ad leaves the impression that if Mr. Obenshain is elected, Virginia women will be chased down the street by brute squads wielding vaginal probes. It's very effective until you stop to think. What's more "extreme" or "intrusive?" Letting women see what's going on in their wombs, or having an abortionist reach in to tear a baby apart? One action is diagnostic, while the other's specific purpose is to take a human life. And yet one is "extreme," and the other is about "women's health."

Well, as we learned in 2012, when the Obama campaign, confronted with the truth, continued to run an ad falsely charging Mitt Romney with causing a woman to die of cancer, that truth is a luxury, not a necessity. If truth helps to elect the candidate, fine. But if a lie works better -- and there are lots of ways to lie -- go for it. The media won't be the least bit curious.

The antidote is to put the liars on the defensive by exposing the lies, and defending your own positions with unapologetic clarity.

Conservative GOP candidates found their inner pit bull in 2010, running against Obamacare and achieving an historic electoral victory. In 2012, they seemed to forget that lesson. It didn't help that the Internal Revenue Service was treating the Tea Parties like Chicago shop owners who won't "play ball for the team."

But with Obamacare's pain spreading, the only thing for Republicans to fear is fear itself. That and reverting to form.