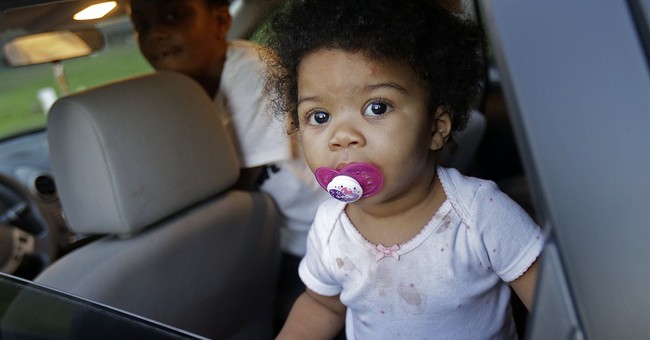 Uwe and Hannelore Romeike, who now live in Tennessee, face the seizure of their six children by German authorities if they return, and possibly prison terms. Tough beans, said the Board of Immigration Appeals. As of this writing, the White House has yet to respond with more than a “no comment” to an online petition supporting the Romeikes that reached the minimum for a response of 100,000 signatures on April 9 and has climbed past 127,000 since then.

Meanwhile, a bizarre child abuse case is unfolding in California that the media are largely ignoring. State authorities should have stepped in long ago to stop the abuse – except that they apparently approve of it. After all, the parents are the perps.

Two lesbians in Berkeley are turning their adopted 11-year-old boy into a girl. Seriously. The lad, who they acquired at age 2, is being given drugs via an implant on his left arm to block his puberty. The next step would be a surgery that will mutilate him forever. It’s supposed to be fine because the boy, Thomas, has bought into the idea. And the two women say that the drug scheme will give the boy, now named Tammy, more time to think it over.

And we’re supposed to be okay with this?

The civilized response to this news is to rescue the boy, revoke the adoption and charge the women with endangerment, abuse and whatever else the authorities can find to deter such criminal insanity. The next step would be to take a hard look at an adoption process that allows such horrors to be committed and even encourages them.

Where are the adults? And where are the liberals who so often skate over legitimate parental rights in their quest to use government force to dictate child rearing?

We’re talking about the administration of Democrat Gov. Jerry Brown, who signed a law on Oct. 1, 2012 outlawing the right of parents to take their children under 18 to counseling for unwanted same-sex desires. They can hire only counselors who affirm the children as gay. That’s California’s current idea of freedom.

Over on the East Coast, New Jersey Republican Gov. Chris Christie recently signed a similarly draconian law. These statues don’t just run roughshod over the freedoms of religion, speech and rights of conscience; they drive a tank over them. No true “conservative” would facilitate a law that, in effect, criminalizes the 5,000-year-old Judeo-Christian concept of sexual morality and turns parents into outlaws.

The SPLC lawsuit against Jews Offering New Alternatives for Healing (JONAH) says the pro-straight counseling violates a state consumer fraud law because as the junk science “proves,” nobody can ever possibly reduce temptations or experience change. That would be news to millions of people who have conquered once-dominant temptations of all sorts and gone on to better lives.

“With God, all things are possible,” Jesus said in Matthew 19:26. It’s how John Newton stopped being the captain of a slave ship and wound up writing “Amazing Grace.”

Here’s the big picture in America and Western Europe: What is good and right and yes, normal, is being criminalized, while what is wrong and sometimes dangerous is gaining the use of government force to impose mandatory acceptance.

Any resistance to this trend, we’re told, is motivated solely by animus or hate. That was the essence of the U.S. Supreme Court’s majority opinion written by Anthony Kennedy in United States v. Windsor, which struck down much of the federal Defense of Marriage Act.

So I have a couple of questions for Justice Kennedy and his colleagues. Which would be evidence of hate? Intervening to help the confused boy in Berkeley wait at least until he was an adult and had the chance to reconsider? Or letting this travesty happen?

For that matter, is it hateful to offer sanctuary to a Christian family whose only crime is to raise their children in keeping with their faith?