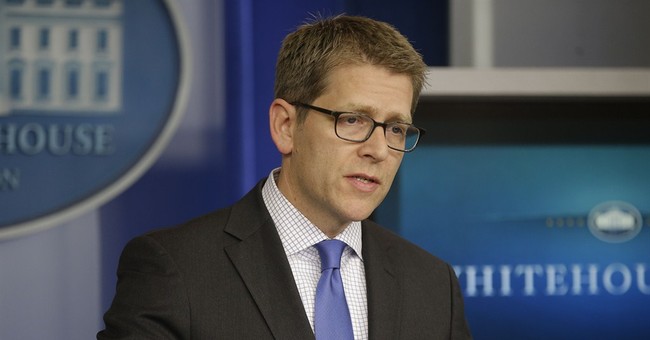 Barack Obama says he is angry about the Internal Revenue Service singling out conservative and Tea Party groups for rough treatment, even though it may or may not have something to do with an anti-Muslim video.

He might want to check with Hillary again. There are so many scandals breaking over the White House that confusion is understandable.

Spokesman Jay Carney has gone to carrying a steel umbrella and wearing an Ironman suit, even though hip boots might be more apt. Between the Benghazi terror attack and coverup, the Justice Department’s seizure of Associated Press journalists’ phone records and its investigation of Fox News reporter James Rosen, plus the IRS’s authoritarian thuggishness and more scandals involving Obamacare, this stuff is getting deeper by the day.

Not everyone agrees that the IRS overstepped. So what if the agency targeted Billy Graham after he took out an ad defending marriage? So what if the IRS delayed and otherwise sabotaged applications from groups with “Tea Party” or “Patriot” in their names? So what if hundreds of conservative groups, from pro-lifers to people battling vote fraud, were treated badly?

MSNBC’s Lawrence O’Donnell did not merely downplay the scandal; he made the IRS out to be as sincere and fair as the Dad in “Leave It to Beaver.”

“I do not believe what the IRS was reported to have been doing is an outrage,” O’Donnell said. “I believe that the IRS agents in this case did nothing wrong. Let me say it again, you won’t hear it anywhere else.” Could that be because, judging by his denial of irrefutable evidence of wrongdoing, he just did a swan dive off the Cliffs of Insanity?

Let’s let Mr. O’Donnell finish: “The IRS agents did nothing wrong. They were simply trying to enforce the law as the IRS has understood it since 1959.” Does that include demanding Facebook postings, a list of publications and donors’ names, delaying tax status for some groups for more than two years, and leaking confidential tax information to rival political organizations? For instance, just how did the homosexual advocacy group Human Rights Campaign wind up with tax data from the National Organization for Marriage?

As the Wall Street Journal notes, “The Human Rights Campaign says it obtained the return from ‘whistleblowers', but leaking confidential tax information is a crime.”

I can’t imagine that the White House wants desperately to find out who did the deed. Maybe they do. In the movies, the bad guys almost always deal ruthlessly with incompetents who embarrass them. “You have failed me for the last time...bang!”

And maybe I’ve been too harsh on Mr. O’Donnell. He has some company down at the bottom of the cliffs. CNN Senior Legal Analyst Jeffrey Toobin also said the IRS scandal is much ado about nothing:

“I think, you know, this is a big Washington phenomenon at the moment. But the notion that this is some earth-shaking scandal and that responsible people should be talking about impeachment seems, frankly, ridiculous, at this point.”

That would rule out Sen. Jim Inhofe, Oklahoma Republican, as a “responsible” person. But Sen. Inhofe lost official respectability years ago when he began questioning the junk science propping up the global warming industry. He did this while sitting in committee next to California Sen. Barbara Boxer, a high priestess of climate change politics.

Here’s a snapshot of how the IRS has been operating out of its Cincinnati office, which handles applications involving nonprofits. Many Tea Party groups say they never received their 501(c)(3) status and simply gave up. By contrast, the Barack H. Obama Foundation, run by the president’s brother, got theirs in 34 days, according to the National Legal and Policy Center, as reported in the Daily Caller.

With scads of new taxes looming in Obamacare in 2014 and the IRS hiring thousands of new agents, does it comfort you to know that Sarah Hall Ingram, the person who ran the Cincinnati office responsible for tax-exempt applications between 2009 and 2012, now directs the IRS’ Affordable Care Act office, according to ABC News? Need a hip replacement? How do you feel about President Obama?

Idaho businessman Frank VanderSloot, who donated to Mitt Romney’s campaign, wound up in April 2012 on an Obama campaign website list of eight “less than reputable” people who donated to the eventual Republican nominee. Twelve days later, someone delved into his divorce records, a tactic used to discredit Mr. Obama’s opponents in Democratic primary campaigns in Chicago.

In June, as the Wall Street Journal’s Kimberley Strassel notes, “the IRS informed Mr. VanderSloot and his wife of an audit of two years of their taxes. In July, the Department of Labor informed him of an audit of the guest workers on his Idaho cattle ranch.” In September, the IRS slammed him with yet another audit.

After being told several times the application was under review, Ryun took a different tack in September 2012. He made Media Trackers a project of Greenhouse Solutions, a pre-existing group whose permanent status was pending.

Presto. “Within three weeks, Greenhouse received permanent nonprofit status from the IRS, and the IRS approval was transmitted to us from its Cincinnati office,” Ryun told Yahoo News. “Do I think we benefited from what many think is a liberal-sounding name? Absolutely.”

The lesson is clear, as it has been for budding journalists and college students with leftist professors since the 1960s – keep your faith and/or your beliefs to yourself until you’ve reached a certain level of success. Even then, shut up or else.

And if you’re a group seeking nonprofit tax status, it probably wouldn’t hurt to work the name “Obama” into your organization’s title.