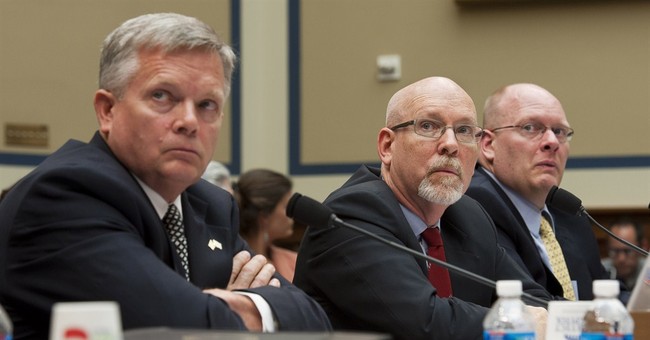 You just knew press coverage of the congressional hearing on the Benghazi cover-ups last Wednesday would be nonexistent or squirrely, right?

It was mostly the latter, so break out the nuts.

After the hearing, an ABC radio segment utterly ignored the content. Three State Department whistleblowers had exposed alarming contradictions in the official White House account, but ABC News led with a clip of Rep. Elijah Cummings (D-Md.), who said the hearing was politically motivated, followed by a GOP spokesman who said it wasn’t. That was it.

Pay no attention; there’s nothing to see here, folks.

On NBC, veteran newsman David Gregory breezily blamed the intelligence community for the Obama Administration’s initial claims that the Sept. 11, 2012 attacks on the U.S. consulate were a spontaneous uprising against an anti-Muslim video. U.N. Ambassador Susan E. Rice, who on five Sunday talk show appearances on Sept. 16 falsely blamed the video, was a “peripheral player,” said Mr. Gregory.

Then, perhaps realizing he was being too obvious in carrying water for the Obama team, he finished with, “there was at least sloppiness with regard to why they were describing this in the way that they were when it very quickly became apparent that this was a terror attack.”

The White House knew through real-time communiqués that the attack had nothing to do with the video. Yet, days later, Ms. Rice, along with Hillary Clinton, continued to blame the video. This is “sloppiness?” A shorter word comes to mind. A couple of them, in fact.

The night before the hearing, Ms. Rice received the Louis E. Martin Great American Award from the Joint Center for Political and Economic Studies at a ceremony attended by Vice President Joe Biden. You can’t say the Left doesn’t take care of its own, especially those who fall on their swords to protect the White House.

Of the news networks, only Fox had real-time coverage, but even Fox broke away for updates on the kidnap-rape-recovered-victims story out of Cleveland, and the first-degree murder verdict against Arizona waitress Jodi Arias. The other major news sites led with the juicy, personal-interest stories.

In case you hadn’t followed the hearing, these are some of the nuggets missed or underplayed by the media squirrels:

- Mark I. Thompson, deputy coordinator for operations at the State Department, testified that he requested an armed squad be sent to Benghazi before the final assault on the compound but was denied.

- Gregory Hicks, deputy chief of the mission in Libya, testified that, “I was stunned. My jaw dropped. And I was embarrassed,” watching Ms. Rice’s mischaracterizations of the attack on TV.

- When Rep. Jason Chaffetz, Utah Republican, went to Libya to investigate, Mr. Hicks testified, he was told by Hillary Clinton’s chief of staff, Cheryl D. Mills, not to let Mr. Chaffetz attend any meeting without a lawyer. When Rep. Chaffetz did attend one such meeting, Mr. Hicks was phoned by a furious Ms. Mills, who knows damage control; she conducted Bill Clinton’s impeachment defense.

- Mr. Hicks said higher-ups tried to block him from cooperating with the committee, and that he was busted to a lower job.

Mr. Milbank also summarized Mr. Hicks’ riveting testimony as “gripes” that were “about bureaucratic squabbles rather than political scandal.” Right. And the Boston Marathon was marred by an appliance malfunction.

The hearing was conducted by the House Oversight and Government Reform Committee, which has sitting members of both parties. When Democrats chair hearings, it’s about good government. When Republicans do it, it’s political theater. I don’t recall the AP describing any Obamacare sessions as a “Democrat health care hearing.”

Breitbart.com’s Todd Warner Huston further points out that, “Cassata inserts her opinion into the description of the day's events as well.” Here’s her fourth paragraph:

And how “exhaustive” is that review? Elliott Abrams, who headed Middle East affairs in the George W. Bush Administration, wrote, “Mrs. Clinton’s role in this matter remains obscure in part because the State Department’s Accountability Review Board did not interview her, amazingly enough.” That’s amazing, all right.

We may never know exactly what transpired, because, as Terence Jeffrey writes at CNSNews.com, “Amb. Thomas Pickering and Admiral Mike Mullen, the co-chairs of the State Department’s Accountability Review Board that investigated the Benghazi attack ... have refused requests from the House Oversight and Government Reform Committee to testify in the committee or even speak informally with it.”

Except for Fox News, The Washington Times, Townhall, and some other conservative news sites, not much of this was being reported. It heated up on Friday, when the press corps, perhaps stung by suggestions that they were stooges, stirred long enough to ask White House press secretary Jay Carney some real questions on Benghazi and the IRS’s targeting of Tea Parties and other conservative groups.

Until then, it was largely up to others to get the word out.

A Washington Post blog post, “Who’s Tweeting about Benghazi? Rich, middle-aged men and Chick-fil-A lovers,” reported that Tweeters using the #Benghazi tag during the hearing were “58.3% male, with an average age of 52.6 and a median income of $61,800 … they also like Chick-fil-A and Walmart.”

Guns-and-religion-clinging Americans, doing the job the media won’t do.

Matt Vespa
What Is Wrong with Eric Swalwell?