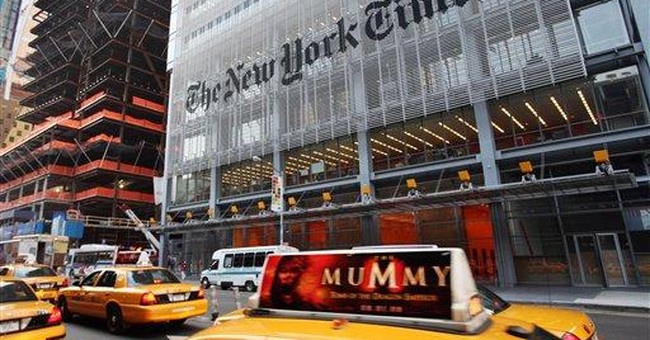 The New York Times continues its transformation from the Gray Lady into the Lavender Lady with three more movie reviews on Oct. 24 highlighting “‘gay” films whose combined viewership should roughly equal one night’s worth of gay bar patrons in Greenwich Village.

As proof that the transformation is still not complete, however, this is the same paper that did a somewhat-snarky-but-fairly-positive review in September of the heartwarming, low-budget Christian film Fireproof, which has passed $20 million at the box office. And the book drawn from that film, The Love Dare, has just reached the top of one of the Times’ bestseller lists.

In “A Legal Tussle for Civil Rights,” Jeannette Catsoulis gushes over a documentary called Saving Marriage and notes that it is rated PG-13 (parents strongly cautioned) for “homophobic language.” She begins her piece:

“An in-the-trenches, defiantly partisan and exuberantly big-hearted movie, “Saving Marriage” documents the Massachusetts imbroglio over same-sex unions with moving candor and unflagging spirits.” Later, she warns that, “The roots of puritanism run deep, but they’re far from invisible” and concludes this way: “Rambunctious and hopeful, ‘Saving Marriage’ asks us to re-examine an institution — and a word — most of us take for granted. By the end, we may feel that saying “I do” is no different than saying “I am.”  The film, labeled as a 2006 release, is opening today in New York, Los Angeles, San Francisco, Denver and Boston.

Meanwhile, in “Noah’s Arc: Gay Wedding Bells,” Andy Webster probes the virtues of an offshoot of a series on the all-gay LOGO TV network. He pronounces Noah’s Arc: Jumping the Broom “an agreeable melodrama” about the “nuptials” of two men, and acknowledges that the film is “unlikely to reach an audience beyond that of the show, which concerns the lives of prosperous gay black men in Los Angeles.”  Opening nationwide (really?), it’s rated R for “mild nudity, sexual situations and language.”

Here’s an excerpt of Webster’s review:

“Given the Jacuzzi and two bachelor parties, the occasion prompts a flurry of flirtations, jealousies and amorous encounters. And yet, despite some drinking (with nary a hangover afterward) and a fling or two, the prevailing mood isn’t campy or disco-decadent. Rather the emphasis is squarely on heartfelt communication, monogamy and child rearing: this group shares a prayer at the dining room table. Written and directed with restraint by the show’s creator, Patrik-Ian Polk, the film ends just as you’d expect: with vows of conjugal commitment.”

It sounds so wholesome that perhaps Focus on the Family might want to recommend it. In case CNN is taking quotations out of context, let me add: NOT.

Finally, in “Campy Chills,” Nathan Lee takes a look at The Gay Bed & Breakfast of Terror, a homosexual send-up of slasher movies, and doesn’t much like what he sees.  Lee notes that the protagonists and eventual victims are a lot like their “straight counterparts” in such films: “so catty, obnoxious and generally unpleasant, you can’t wait for them to start getting hacked to bits.”  He concludes that it’s “an indecisive mix of tepid camp and gory gross-out” that “doesn’t go far enough in either direction. The only thing it has to spare is an inexplicably meanspirited view of its characters. …why does everyone in this movie seem to hate one another so much?” (Readers may now fill in that answer themselves. I really don’t have a clue.) The unrated film opens in New York, San Francisco, Los Angeles and Denver.

Well, let’s wrap this up with a look back at the PG-rated Fireproof, which got a far more positive notice in the Times than the gay slasher movie, and even a respectful follow-up, “It’s a Healthy Marriage of Faith and Film” by Julie Bloom about Fireproof’s surprising box office success.

In his Sept. 27 review, Neil Genzlinger opened with:

“’Fireproof’” may not be the most profound movie ever made, but it does have its commendable elements, including that rarest of creatures on the big (or small) screen: characters with a strong, conservative Christian faith who don’t sound crazy.”

“…. the cast of mostly amateurs (Mr. Cameron of “Growing Pains” being the exception) is surprisingly good. And the moments of comic relief are mildly amusing.

“Only at the end do the filmmakers get heavy-handed, and they seem not to know when to wrap up, letting the movie run on for several smarmy scenes beyond its natural endpoint. Until then, though, this is a decent attempt to combine faith and storytelling that will certainly register with its target audience. And maybe with other folks as well: among those caring-for-marriage tips are some that anyone could use to improve any type of relationship, with or without the God part.”

Not bad. Of course, lots of filmgoers have found themselves deeply moved and holding back tears at what Genzlinger describes as the “smarmy” scenes. And the film’s takeaway message is that the “God part” is what makes any of the tips actually work.

But for the Lavender Lady, the Fireproof review last month and the subsequent Bloom article were nice departures from the company line. On Oct. 24, it was back to business.