Oscar's A Grouch This Year 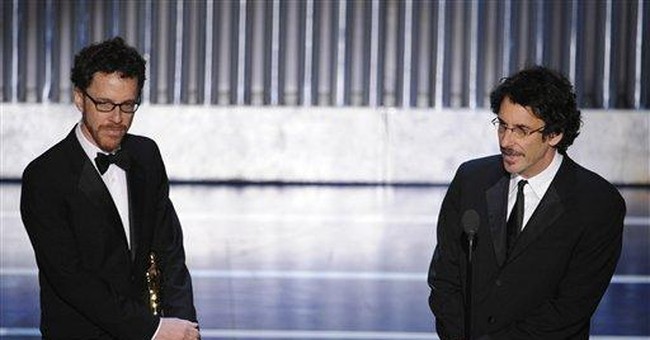 Well, the critics got their way.

They made sure the Oscars flopped.

With the notable exception of Juno ($130 million), the lone box office hit in the bunch of Best Picture nominees, the artsy, depressing films gave theater owners more gray hairs. It’s hard to sell popcorn to make the rent when there are only a handful of people sitting there getting depressed or cringing during the sadistic blood-letting.

But there were some interesting moments at the Oscars. Taxi to the Dark Side, a military-torture film, beat out Sicko, the Michael Moore paen to the joys of socialized medicine, for Best Documentary. This allowed film maker Alex Gibney to uphold the Oscar tradition of someone making a jackass of himself by slamming America’s military. You know, the same military that is protecting his freedom to be a jackass in front of millions of people.

As Hollywood Reporter’s Steven Zeitchik put it, Gibney “gave one of the shortest but most politically spirited speeches of the night, saying that his wife was hoping he’d make a romantic comedy, but ‘after Guantanamo, Abu Ghraib and extraordinary rendition, that was certainly not possible.’”

No. The simple joys of life such as romantic comedies must take a back seat to Gibney’s duty to cast America in the worst possible light.  Someone has to do it at the Oscars. It’s unclear how Gibney’s brief moment of glory was received by the TV audience.  Out there in theater land, his film pulled in a whopping $13,000 in 2007 and another $92,000 after being nominated in January. But actress Julie Christie was undoubtedly all aglow at the awards ceremony. She and writer/director Paul Haggis (Crash) were sporting orange lapel ribbons, the latest in protest wear. Also spotted were orange bracelets, inscribed with “Torture+Silence=Complicity.” The orange is for the orange jumpsuits worn by terrorists at Guantanamo and are a reminder that America’s fifth column wants Guantanamo closed. After all, 9/11 was back in 2001, and there’s nobody out there now who wants to kill us. Is there?

As for the TV audience, there were 32 million viewers who sat through the Oscar show on Sunday night – the lowest rated Oscar show since 1974, and the lowest percentage (18.7 rating) since the show’s inception in 1953.

Most of them were probably looking on with the same fascination you might have while watching your weird Uncle Cosmo carry on at the church picnic—“Look! He’s in a world of his own! Isn’t that cute?”

The lack of traditional, crowd-pleasing films and big stars this year was enough to make you yearn for 2005 and the critical darling, Brokeback Mountain. Well, maybe not. Besides, if you craved gay propaganda, the winner of this year’s Best Documentary Short was Freeheld, a lesbian polemic for gay “marriage.”

Let’s go back instead to 2004, when The Lord of the Rings: Return of the King racked up $377 million domestically and a total of $1.1 billion worldwide and then took Best Picture, Best Director and 9 other Academy Awards. That year, the Oscars snared 43.5 million viewers.

Apart from Juno, the only other hit film to win this year was the Best Animated Feature Oscar for Ratatouille, the story of a Parisian rodent who happens to be the best chef in Paris. The lovable rat racked up $206 million domestically and another $414 million worldwide for a total of $620 million.

The films that made people feel entertained and upbeat – Spider-Man 3, Shrek the Third, Transformers, and Pirates of the Caribbean: At World’s End, all made more than $300 million domestically but were virtually absent at the Academy Awards. Even Alvin and the Chipmunks made over $200 million.

As for the dark, depressing films that the critics love? They took the Taxi to the Dark Side.