Good News About Vouchers the PDK Pollsters Failed to Disclose

Robert Holland
|
Posted: Sep 26, 2017 12:00 PM
Share   Tweet
The opinions expressed by columnists are their own and do not necessarily represent the views of Townhall.com. 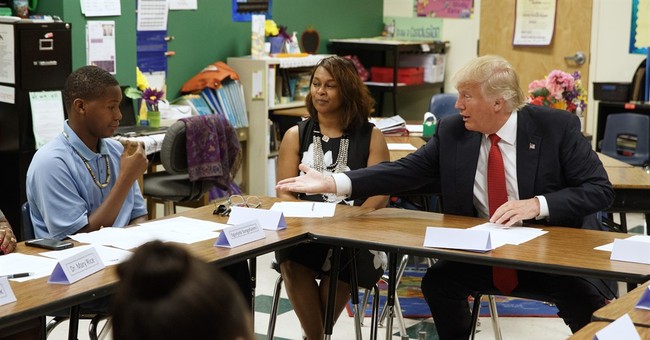 Released August 15, the annual EdNext poll (sponsored by Education Next) found a plurality of support for vouchers among the general public: 45 percent in favor, 37 percent opposed. EdNext asked respondents if they favored giving “all families with children in public schools a wider choice by allowing them to enroll their children in private schools instead, with the government helping to pay the tuition.”

Those surveys are consistent with many other polls, nationwide and regional, that have found support for choice highest among minority groups, who have often experienced discrimination in government-run schooling. But what are we to make of the recent findings of the 49th annual PDK survey, the big daddy of education polls, which seems to show vouchers are falling steadily out of favor as a way to empower parents with private school choice?

“As in past years,” the report stated, “the 2017 poll shows little support for using public money to send children to private schools. The more Americans know about how voucher programs work, the less likely they are to support them or say they’d participate in them.”

Whoa there! If true, this finding would be remarkably different than what has previously been reported. But before anti-choice zealots celebrate the apparent collapse of school-choice support, they should consider what the opinion data the PDK has amassed actually reveal.

Harvard professor Paul E. Peterson, senior editor of the journal Education Next, did the detective work of digging through current and earlier PDK polling results and found something very different from the PDK’s written analysis. Despite the PDK survey having been generated with polling questions presenting choice in a negative light, the data show voucher support climbing and opposition falling dramatically.

Peterson was able to reveal the truth because PDK asked its population sample exactly the same question in its 2011, 2012, 2013, 2015, and 2017 surveys: “Do you favor or oppose allowing students and parents to choose a private school to attend at public expense?” That question conveys a negative impression of vouchers by portraying freedom to choose as a mere “public expense.” Nevertheless, the use of the same question helps in tracking shifting opinions over the years.

Voucher support did dip in PDK’s polling between 2011 and 2013, Peterson found, however, “since that time the trend has completely reversed itself and then some.” Here are the numbers:

Opposition to “allowing parents to choose a private school at public expense”:

PDK respondents favoring vouchers for school choice rose from 29 percent in 2013 to 39 percent this year.

PDK Chief Executive Officer Joshua P. Starr, a former public school superintendent in Connecticut and Maryland, used a statement accompanying the PDK Poll to praise parents who accept school officials’ actions if given a clear explanation, as opposed to expressing their displeasure, becoming activists, or even running for the school board. He hailed compliant patrons as a silent majority in concluding with this blast:

“One of the advantages of a survey like the annual PDK Poll of the Public’s Attitudes Toward the Public Schools is that it pulls back the curtain on that silent majority. This year, as in many recent years, the poll showed a wide gap between what the most strident policy makers and reformers are advocating and what the American public actually wants and believes.”

No, in reality, we have found behind the curtain evidence of the education establishment using data in a highly selective way in a desperate attempt to stifle parental choice, which threatens to loosen the iron grip statists have on the education of American children.