Who’s Afraid of the Demonized ‘V-Word’ in Education?

Robert Holland
|
Posted: May 30, 2017 11:55 AM
Share   Tweet
The opinions expressed by columnists are their own and do not necessarily represent the views of Townhall.com. 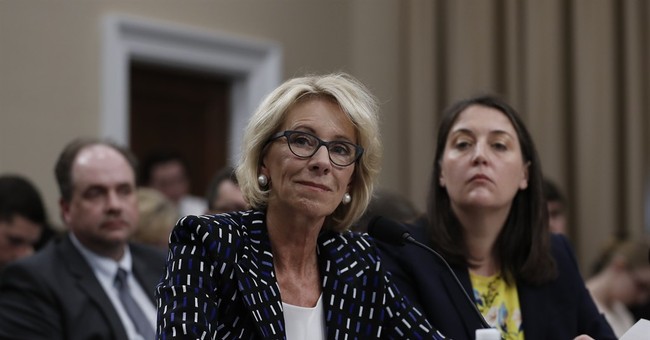 Teachers-union bigwigs rarely miss an opportunity to pin the “v” word on any school-choice program that gives children a shot at a new educational opportunity outside the government-run schools. They figure they have done such a fine job demonizing the word “voucher” that the general public will run screaming from anything in education tagged with the v-word. After all, voucher sounds like “vulture,” a name some enemies of choice actually have used by way of slamming “corporate privatizers.”

In truth, there is no reason for anyone to be ashamed of supporting programs in 25 states and the District of Columbia that award vouchers (effectively scholarships) enabling 178,000 children—the majority of them disabled, special-needs, or otherwise disadvantaged—to attend private schools. A clear majority of randomized research studies have shown voucher students making academic gains and parents expressing happiness with these schools.

Nevertheless, even though there are at least nine other kinds of school-choice programs that do not use vouchers, the would-be protectors of a governmental K–12 monopoly keep using the v-word to try to taint those that advance private choice. Unfortunately, the news media frequently follow the v-worded script of the National Education Association (NEA) and American Federation of Teachers (AFT), the two dominant teachers unions.

For instance, the Associated Press recently published a story in which the author reported  a Phoenix group is working to get a measure on this November’s ballot that, if approved by voters, would kill recently enacted legislation supported by Gov. Doug Ducey (R) that would bring about “private school voucher expansion.” According to the report, Ducey’s law will give Arizona “one of the broadest voucher programs in the nation.”

The problem with that story is the program discussed has nothing to do with vouchers; it is a law that expands the availability of education savings accounts (ESAs).

For clarification, here is brief primer paraphrasing an excellent up-to-date guide on the subject, “The ABCs of School Choice” (2017 edition), available for free at EdChoice.org: A voucher is a piece of paper parents can present to a participating private school, religious or non-religious, to pay partial or full tuition for their child with the aid of public funding. An ESA is a publicly funded account from which parents can draw (typically using a debit card) to pay for a variety of educational expenses for their child.

The difference is much more profound than paper or plastic. A voucher provides entrée to a private school. That’s it. By contrast, the ESA empowers parents to use a significant portion (usually 90 percent) of their child’s per-pupil share of state funding to select from a wide range of permitted educational services—not just tuition, but the likes of online instruction, therapies, community college classes, tutoring, dual enrollment, and other state-approved customized services.

In short, vouchers are about selection of a school, and ESAs are designed to provide educational choice in full measure. They have the potential to revolutionize education by putting parents completely in charge. That no doubt terrifies the teachers unions and other entrenched special interests within the education establishment. Currently, only about 11,000 children nationally are able to benefit from ESAs, but the number of states setting up such programs (five since 2011, with numerous others under legislative consideration) is growing.

Considering their state’s history, Arizonans ought to know better than most the difference between ESAs and vouchers, and they should be bullish about the prospects for ESAs to survive possible future legal challenges.

The Arizona Supreme Court shot down two small voucher programs in 2009. According to the ruling, the programs violated a so-called Blaine amendment provision in the state’s constitution that prohibits any public funding “in aid of … private or sectarian schools.” (Cain v. Horne.) However, as Institute for Justice litigator Tim Keller notes, oral arguments in that case signaled state jurists might have no problem with a school-choice program giving parents a diverse array of options.

Sure enough, in a 2013 decision (Niehaus v. Huppenthal) the state Supreme Court let stand, an appellate court held that an ESA is not impermissibly aiding private or sectarian schools because “none of the ESA funds were pre-ordained for a particular destination.”

Blaine amendments are remnants of 19th-century anti-Catholic bigotry that persist in the constitutions of two-thirds of the states. The precise wording differs from state to state, as do judicial philosophies, of course. However, the Arizona ESA’s ability to clear Blaine barriers that thwarted voucher programs may help convince reformers across the country to join forces behind the savings accounts.

Whether the NEA and AFT will ever stop labeling everything they hate a voucher is much more doubtful.