Kraninger Would Be Worthy Successor to Mulvaney at CFPB

Robert Graham
|
Posted: Sep 10, 2018 1:06 PM
Share   Tweet
The opinions expressed by columnists are their own and do not necessarily represent the views of Townhall.com. 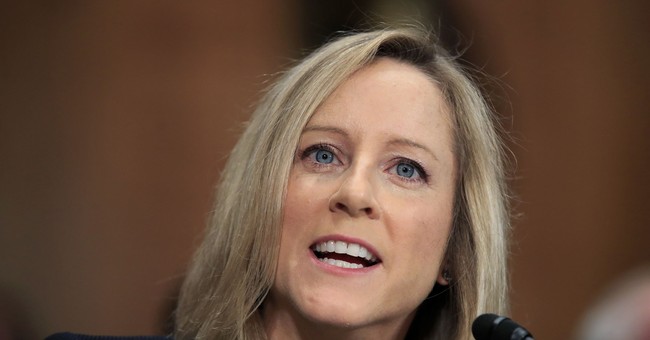 After her nomination initially faced stalling and obfuscation, Kathy Kraninger is rightly poised to be confirmed as the next Director of the Consumer Financial Protection Bureau. She was approved by the Senate Banking Committee several days ago, and now she faces full Senate consideration and approval to become Mick Mulvaney’s replacement at the CFPB. The vote to confirm Kraninger will most likely come sometime before the end of the year, and it cannot come soon enough.

Bitter critics of Kraninger, such as Massachusetts Senator Elizabeth Warren (D), still want to scuttle her nomination in the full Senate, which is not surprising coming from the CFPB’s original mastermind. But Kraninger finally has a real shot at leading the agency - she has the support of the CFPB’s acting director Mick Mulvaney, as well as conservative Republicans who see her as a worthy successor. I’m sure Mulvaney will be glad to get back to only having one job as head of the Office of Management and Budget, and key GOP influencers such as Senators Pat Toomey and Mike Rounds agree.

Rightfully, the critics understand and fear that Kraninger will continue what Mulvaney has started in his leadership at the agency – and she should. Mulvaney took an agency that was arguably more interested in activism and fishing expeditions than in bread-and-butter consumer protection and has instead turned it into a truly effective and efficient watchdog agency for American consumers and businesses. No more bureaucratic overreach.

The agenda Mulvaney has instituted eliminated the deeply flawed aim of the Richard Cordray-era CFPB that involved years-long, open-ended investigations that have held hostage both businesses and consumers while regulatory gears ground away. Mulvaney, on the other hand, has worked to clear out pending cases before the CFPB and refocus the agency on real consumer protection.

Under Mulvaney’s leadership, the CFPB focused on and fined the true bad-actors like Wells Fargo, TCF Bank, and the Hydra Group. In those cases, what the CFPB did was clear, decisive, and restorative. On the other hand, he has recognized good-faith actors, and that they should be relieved of costly investigations and procedures. This is exactly what we should strive for in our government agencies. Get out of the way and let American businesses grow.

Now, Kathy Kraninger is the perfect follow up to Director Mulvaney. Like Mulvaney, she has experience, a go-get-em mentality, and the desire to effectively steer the ship. She’s served in several government positions in both the executive and legislative branches, and she knows her way around the block.

Too many people in Washington, D.C. believe that the purpose of government should be to insert itself ever deeper into our business. They viewed the CFPB as a powerful tool to do that, but now resent it after Mulvaney’s leadership has turned the agency around.

During his tenure at the CFPB so far, Mulvaney has returned the agency to one that supports small businesses and service providers, while at the same time protecting American consumers. This is exactly what the agency should be doing. Let’s hope that when all the dust settles from the confirmation process, that Kathy Kraninger is confirmed to lead the CFPB, and that she will follow Mulvaney’s good example.