Robert Graham
|
Posted: Oct 13, 2016 1:00 PM
Share   Tweet
The opinions expressed by columnists are their own and do not necessarily represent the views of Townhall.com. 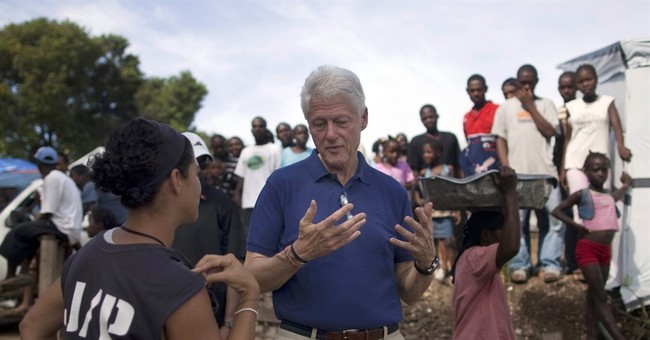 In my religion, forgiveness is at the center of all things.  We are taught that we are all sinners saved only by our faith in the truth of grace.  When we acknowledge our sin, accept grace, and commit to live in new ways, we are forgiven.  In politics, it seems things are a little different.

As the Chairman of the Republican Party of Arizona, I admit to being less than an unbiased observer of events.  My commitment is do what I can to elect Republicans from the top to bottom of the ballot.  This said, my eyes are not blinded by an incredible double standard when it comes to how the mainstream media generally treats candidates from the two major parties.  No better example exists than the recent display of the less than sincere outrage evidenced by committed liberals to the remarks about women made by Donald Trump.

Let us be clear here.  What Donald Trump said was terrible and wrong.  There is no excuse for it.  Accounting for the comments by likening them to locker room bragging by men may help explain it.  However, it does not justify it or allow for any response other than disgust.  Fortunately, Donald Trump instantly gave an unequivocal apology.  No half hearted “if I offended anyone” words, just a simple “I was wrong.”

What is amazing to me is that many of the same people who claim these words are so terrible that there can be no forgiveness are the very same people who told us years ago that we needed to not be upset about the President of the United States engaging in oral sex literally in the Oval Office of the White House.  Of course, these are the same people who previously had claimed there was no such thing as consensual sex involving a superior and subordinate, but could accept this taking place between the President and a 21 year-old intern.

It is true that Bill Clinton is not on the ballot this year, but his wife, Hillary, sure is.  So, seemingly what Hillary Clinton did and did not do, what Hillary Clinton said and did not say about all of the sexual misconduct by her husband ordinarily would be fair game for evaluation by the media and the voters.  Yet, the media has refused to go anywhere near this in any meaningful fashion.  Forget Monica Lewinsky and the claim that was “consensual sex.”  What about Juanita Broaddrick, Kathleen Willey, and far too many others?  How is it even possible that not one member of the media has asked Hillary Clinton if she would like to apologize to these women for what happened to them and even for what she had to say about them.  After all, her description of the 21 year-old Monica was calling her a “narcissistic nut case.”

What many Republicans desire is one set of rules, a set that applies to both Republicans and Democrats.  As it is now, it is abundantly evident this is not the reality of things.

To all the liberal partisans, their friends in the media, and even my fellow Republicans, I would ask a simple question.  Why is it so necessary for Republicans to condemn our own candidates when they admit wrongdoing and ask for forgiveness, but we are supposed to overlook the wrongdoing of Democrats who refuse to apologize and simply “move on?”

It is time for Republicans to come together.  This election should be more about the policies required to make America great again and less about potty talk in my estimation.  Only one candidate has presented a vision to make us safe at home and abroad.  Only one candidate has articulated a plan that has any hope of creating and maintaining a growing economy with good jobs.  Only one candidate is willing to stand up and say the values, traditions, and culture that made us great in the first place will be at the center of what restores us to greatness again.  That candidate is Donald Trump.