Robert Charles
|
Posted: Feb 16, 2017 9:21 AM
Share   Tweet
The opinions expressed by columnists are their own and do not necessarily represent the views of Townhall.com. 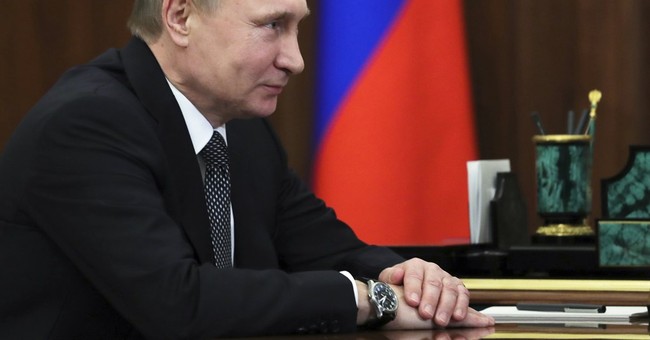 Pause and wonder with me. Just a thought – about Russia, America and recent news. Is it not time to stop giving Russia undeserved credit – and get back to basics, like governing?

Russia is a nation with an economy “in the tank.” It has an unanchored and defensive foreign policy, an unpopular and undemocratic leader, and little to commend the autocratic government for any title like “world power,” except nuclear weapons. This is somewhat disappointing, one imagines, to the Russian leadership – but there it is. They are a hollowed out economy, bulked up with warheads.

Of course, the Russian people have made enormous cultural contributions, from classical music and art, to math, engineering, medicine and space. They're the keepers of the Christian flame, with a millennia-old commitment to Christianity. Ronald Reagan famously found common purpose with these good people, loved their longing for freedom, uncoupled them from Communism. Today, they are weighed down gain.

By contrast, America is the embodiment of freedom. We are a thriving – some might say disorderly – open and lawful, innately idealistic democracy. We have protections – and take them seriously of our individual liberty. Our society is built around a prescient Constitution, which is real. We have municipal, state and federal elections, a matrix of state and federal laws. Federal cohesion rests easily on voluntary separation of powers, an equipoise among a bicameral legislative, strong executive, and independent judiciary.

In short, while we fuss a lot, we are a “wonder of the world.” Nevertheless, here we sit, unhappy. We are on perpetual attack – against ourselves. We seem unwilling to acknowledge our relative economic strength, boundless liberties, sacrifice for them, quality of foreign allies and political leadership (yes, in both parties), freedoms and working institutions, vertically and horizontally integrated, private and public.

Which all vectors to a question: Why are we Americans giving the weak, autocratic, dysfunctional, and defensive Russian government the satisfaction of thinking that we are thinking they have effectively exercised some great, world-changing power over our electoral process? They have done nothing of the sort, and we know it.

In the quiet hours, whether you like the November outcome or hate it, the Federal and State electoral processes were of highest integrity. They worked. We know this, even if we have domestic quarrels over voter identification and such. For flawed human beings, we did alright.

Now, we see oddball intelligence leaks and possible conversations with foreigners, which seem to be creating great, jaw-dropping headlines. We expect lots of haggling and recrimination, all politics. But what are doing? We are leading the Russian government to think they have pulled off something amazing. They think that their broken system has broken ours – only they have done nothing of note, and we know it.

All this flap about Russians hacking our electoral process – proved false. Talk of Russian hacking of the DNC, RNC, and Hillary Clinton’s open and unprotected, recklessly created and recklessly used server – an open invitation – offered little fire for the smoke. Emails from unprotected servers were released by a private leak broadcaster. OK.

Now, we hear about a recorded – somehow? – conversation with a Russian Ambassador by an American citizen, who became the National Security Advisor, then lost trust of the President and Vice President, and resigned. Again, the Russian government must be crowing, knee slapping. They must think they wield enormous power, the power to entrap and rid an American White House of a senior leader.

Now come new stories (same theme, it sells!) of two private individuals with possible links to the Trump campaign, and a former campaign leader (who got fired). They may have had conversations with Russians. Even “Russian intelligence.” Aren’t all Russians in the United States presumed to be “intelligence?” Suddenly, we have another scandal. Russia’s leaders must be cooing a blue streak. They appear to have control over not just the White House, but the American media.

In all of this hubbub, is anyone thinking about those opening four paragraphs? Anyone recalling the relative power and influence in the world of Russia versus America? No comparison.

So what should happen? Well, the press should quiet down, members of Congress also. Three closed, plodding, high-integrity investigations should unfold. They could be announced by the Attorney General, with progress briefed at intervals to Congress. Facts should be kept in perspective, followed where they lead. No special prosecutor or grandstanding by Congress needed.

One should be a Justice inquiry into the existence, and propriety if they exist, of any campaign outreach to a foreign government seeking intrusion. If any relevant individuals conducted contacts, what was their nature? If innocuous, investigation done. If not, follow facts where they lead.

Two, a Justice inquiry – again not the spectacle of more politicized congressional hearings – into exactly how the law allowed any American to be targeted, federally-tracked and calls recorded, with or without Obama White House authorization. Spying and telephone recording of Americans is anomalous. If members of the former White House used federal power in this way, run it to ground – how, why and with what legal authority? If members of intelligence did this, same questions.

Three, a Justice inquiry – not wasteful, dueling congressional acts of indignation – should zero in on recent and earlier leaks, apparently by the intelligence community, of any information collected on any American citizen, including General Flynn.

When the investigations are concluded, they should be briefed to Congress. If actions need to be taken by either Justice or Congress, pursuant to separated powers, take them. If not, tell the American People and close the book.

The frenzy over all things “Russian” should stop. This is bolstering Russia. Instead, the hard task of running the world’s freest, most idealistic, prosperous, democratic, and open government should become the “order of the day.” That should be true for the administration, and Congress. There is too much to be done.

What boggles is that we would allow a relatively weak, unrepresentative, and defensive Russian Government – to think that we think that they have fundamentally changed who we are and how we run our free government.

They have not changed anything, not even a little – but we give them undeserved credit for upending us, the greatest democracy in the world. Time to stop the political indulgence. Let Justice to do their job. Get the rest of Government back to what they were sent to Washington for – governing. Just a thought.