Robert Charles
|
Posted: Feb 14, 2017 11:30 AM
Share   Tweet
The opinions expressed by columnists are their own and do not necessarily represent the views of Townhall.com. 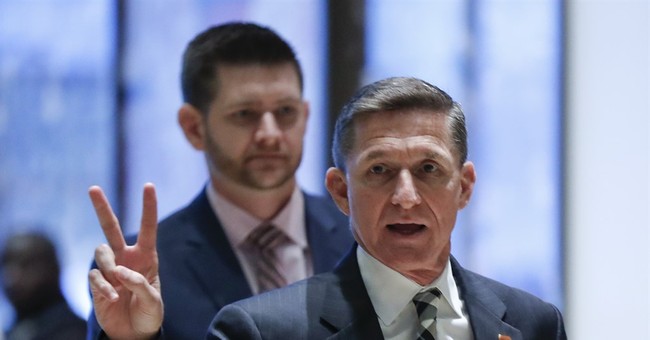 The sudden departure of General Michael Flynn as National Security Advisor, after less than a month in the job, is all about judgement. The question is not about whether the Logan Act was violated, a dead letter for 200 years, but about whether a bond of trust was violated – with the President and Vice President. Apparently, it was.

Although parallels are hard to find, this might be an Al Haig moment, bad judgment plus lack of self-awareness triggering presidential removal, masked as resignation. Haig’s departure was a slow motion meltdown.

In 1981, following the assassination attempt on President Reagan that left him hospitalized, awaiting the Vice President’s return, the then-Secretary of State asserted “I am in control here.” He mistakenly recited the chain of succession, inserting himself at the number three role. The actual number three is the Speaker of the House, and number four is President Pro tempore of the Senate. Prickly by nature, this did not sit well with White House leadership.

Strike two for Haig was a series of low-burning quarrels with Reagan’s Secretary of Defense Caspar Weinberger, who enjoyed the President’s confidence and shared his worldview. Perhaps the third strike was a comment he made suggesting that Europe might shake the Soviet Union up with a “nuclear warning shot.” He resigned in July 1982, having served for approximately a year, and was immediately replaced by long-time Secretary of State George Schultz, who would ride out the full two terms.

Judgement is central to sound decision making – nowhere more than in national security. Being worthy of trust, and judicious about bestowing trust, is central to judgement – for a President, Vice President, every Cabinet member, and of course the National Security Advisor.

Over at the State Department, Rex Tillerson began his tenure with an appeal for honesty, accountability and respect. Those three words seem – as one looks across the Trump/Pence Cabinet – to characterize these leaders, from General Mattis at Defense and General Kelly at Homeland Security to Attorney General Sessions and confirmed Secretaries at the other departments.

But words are just words – until tested. What the President and Vice President are saying, without hesitation, is what President Reagan effectively said to a former General and Secretary of State, Al Haig: Judgement counts. If you are with the program, your temperament is sober, your word is good, your service unconditional and selfless; your standards are above reproach, title irrelevant, and when asked for truth – you give it without thinking. If you are not on that page, distracted or preoccupied, pressing another agenda for whatever reason; if those conditions come slowly or hard for you, this is not the team, not the time, for you.

That message is hard to hear, and probably hard to give, especially to a good man, loyal and enthusiastic, who apparently made a grave mistake tied to judgement. But the President and Vice President’s emphasis on truth, transparency, and character – insistence on them – is a sign of their own readiness and judgment. In that, America should be reassured, bolstered and grateful.

General Flynn’s service as a senior military officer, thoughtful leader on intelligence remains patriotic and distinguished, even if his readiness to be the President’s National Security Advisor – and requisite judgment – were lacking. That the gap was swiftly recognized, by all, and swiftly addressed and resolved, is hopeful.

Now, the new National Security Advisor needs to be found and seated, empowered to center the entire National Security Council staff. He or she must organize on urgent issues and regions, align tightly with the President, Vice President, Secretaries of Defense, State, Homeland Security, Attorney General and leaders in the intelligence community. The process will then swing to full stride behind a leader with judgement, likely not missing a beat. That is my guess. Once George Schultz replaced Al Haig, Ronald Reagan’s foreign policy took off – the rest is history.