Robert Charles
|
Posted: Dec 06, 2016 12:01 AM
Share   Tweet
The opinions expressed by columnists are their own and do not necessarily represent the views of Townhall.com. 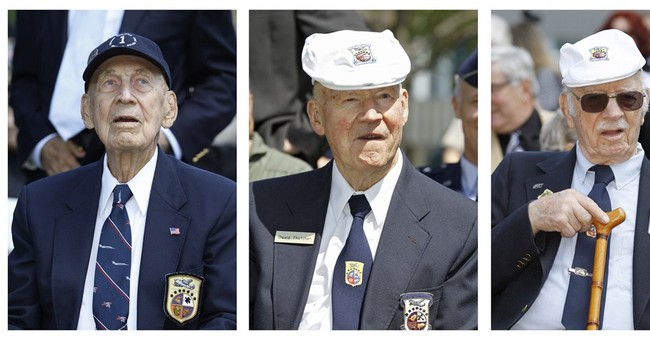 What can you say about the day, December 7, 1941?  Now, 75 years later, it “lives in infamy” – as Franklin Delano Roosevelt projected.  That date also represents America’s resolve to fight back against anything – even an unconscionable, unprovoked attack on our soil – and decisively win.  The obvious parallel is to our resolve and unity in the face of the 9/11/01 attacks – and the need to decisively win against global terrorism, state and non-state.  But there is more to this 75th anniversary of Pearl Harbor than this parallel – or remembering the day and honoring the loss.

What led to national surprise on that horrible, fateful day in 1941 – producing shock, dismay, horror, outrage, anger and resolve – has been exhaustively debated.  Every theory under the rising and setting sun has been lifted, and facts often inaccurately described.  Rather than any conspiracy to “get America into the war,” what actually happened was similar to what happened pre-9/11:  Military and civilian intelligence services did not properly communicate and coordinate.  There was a critical lack of timely intelligence sharing, which proved fateful.  Part of remembering Pearl Harbor then, must be to never again allow America’s guard to come down – or permit a bureaucratic snarl to endanger the nation.

As Henry Clausen, Special Investigator for the then-Secretary of War revealed in his book, Pearl Harbor – Final Judgement in 1992, we missed a chance to protect ourselves.  He really is the final word, and in closing his mammoth recap of all the facts, even assigning blame, he writes:   “The proximate cause or guilt for the disaster at Pearl Harbor was an unworkable system of military intelligence, including the fact that the Navy …” (this part genuinely pains me to recite) …”withheld from the Army vital intelligence information that called for Army action.”

Even Congress, leaving much classified, zeroed on “intelligence,” concluding that:  “dissemination of information … was seriously flawed.”  Specifically, “the fact that we have broken the Japanese codes was more important to the military mind of the time than the information we had obtained from the decrypts.”  Having done something remarkable, we failed to follow where the “decrypts” led.  In fact, turns out the Army did not even have intelligence personnel in Hawaii cleared to receive what had been found, making “a mockery of the concept of mutual cooperation for the defense of the fleet.”  In short, the Interagency of that time, and inter-service intelligence sharing, broke down – with horrific effects.

In our lifetimes, we have seen similar failures of Inter-agency coordination, lulls in national vigilance, flaws in timely information and intelligence sharing, missed follow-through by those trusted and charged to assure security, all to a horrific effect.  But all this serves to keep us now – ready, on our toes, and focused on national security as never before – we may hope.

This 75th anniversary of Pearl Harbor points to another, simpler yet heady, noble, selfless and extraordinary event in American history.  As night follows day – in idealistic, never-say-die America – Pearl Harbor’s horrors led directly to the Doolittle Raid on Tokyo, a mere six months later.  No American should ever think of December 7th, 1941 – without thinking about the Doolittle Raiders.  This unthinkably heroic group of American pilots first conceived, then embraced and performed what all knew was a suicide mission – to show Japan that, even when caught unawares, America would reach out and touch them – could deliver major ordinance over Tokyo.

This daring air raid, launched from the retooled deck of the USS Hornet, by 80 extraordinary men in 16 B-25 bombers – knowing that they were on a one-way trip to hell, from deep pacific to Japan – no fuel for returning, nowhere to land, no safe haven, no end game, except a selfless act of courage to defend ideals and people they loved, America – is without parallel.   The planes were stripped of guns, making them defenseless, then loaded with fuel and bombs.  Every crew knew there was no returning, it was ditch or crash once their bombs were dropped.  The goal was as simple as it was noble:  Show Japan, for all time, that America was able to launch a counter-attack – hitting Japan hard.

By way of effect, the Doolittle Raiders, all 80 of them, demonstrated a resolve that shocked Japan – and fundamentally changed Japan’s strategy in the war, making them prepare for things they had thought not possible.  The heroic raid ultimately had an enormous impact on future Japanese thinking, and helped make possible future American victories in the Far East.   Those 80 men were the living embodiment of knowingly offering one’s life for others, and in this case for all Americans.   Their heroism stands today, still, as a beacon.

Of the 80, 69 miraculously managed to survive, although not without crashing, lifetime injuries, in some cases capture and torture.  In time, the war ended.  Every year from 1946 forward, these rare men gathered.  Last year, there were but two left of the original 80, David Thatcher and Richard (Dick Cole).  David died this year, in June.  Dick, miraculously, remains the lone Doolittle Raider – and as cogent and patriotic, dutiful and extraordinary as he was leaving the carrier deck.  He is now 101.  He was Doolittle’s co-pilot, literally.  And next year, he plans in April to celebrate the 75th anniversary of the raid.

Now here is the kicker, the Doolittle Raiders were the original spirit of America at mid-century, in the early days and teeth of one of America’s greatest tests, World War II.  They shone a bright and unblinking light, with their lives.  That light still shines, and now comes down to us through the years – all 75 of them – to illuminate our own daily lives.

The Doolittle Raiders were the essence of America’s national resolve, in their day, to “Make America Great Again” – without apology, thought of self, or half-measures.  And they actually helped make that selfless conviction a reality.   So how wonderful would it be – just an off-hand idea – if the president-elect, Donald Trump, who has again articulated this national mission and has always honored the lives of veterans, were to place a personal call to just this one veteran on December 7, 2016 … saying thank you,  once again, on behalf of a grateful Nation.   My guess is that a 101-year-old Doolittle Raider, Doolittle’s former copilot and man to whom we owe an eternal debt, Dick Cole, might just smile.   Just an idea, but for the rest of us – may we never forget the spirit of America, embodied in people like the Doolittle Raiders.

Robert Charles is a former Assistant Secretary of State for George W. Bush, former Naval Intelligence Officer, and litigator, who served in the Reagan and Bush 41 White Houses.