Who for Secretary of State?

Robert Charles
|
Posted: Nov 27, 2016 12:01 AM
Share   Tweet
The opinions expressed by columnists are their own and do not necessarily represent the views of Townhall.com. 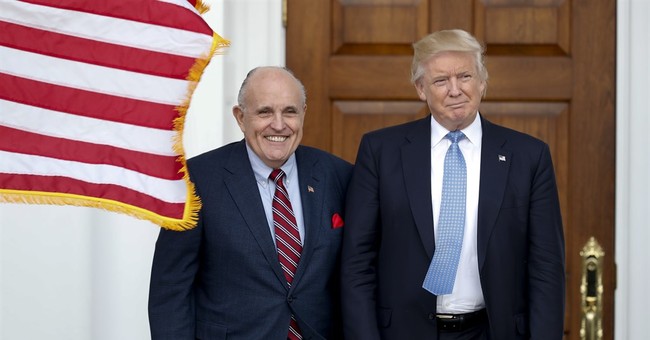 No doubt Rudi Guiliani, a staunch loyalist and the face of our grieving Nation on 9/11, would make an excellent Secretary of State.   That said, he is more Richard Armitage than Colin Powell, more cut to the chase than the 35-year military man, more maverick than mollifier.  Mitt Romney?  Steady mollifier, a proven manager-in-chief, turn-key source for dispassionate counsel.  But is that what the Trump/Pence Administration is hunting, as they prepare to remake America’s Foreign Policy?  Or is the best choice General Keane, General Kelly, Senator Corker?  Maybe. Maybe not.

Comes now a new name, General David Petreaus.  Here is a man heavy on leadership skills, if human, failed in the way men can be, burdened with baggage from the Obama years.  But also a man with battle scars.  There is something to be said for battle scars.  Petreaus is a seasoned strategist, long thinker, former leader of the 101st Airborne, capable of gaining buy-in where none seemed possible, for example by walking into schools and hospitals in northern Iraq (again, center of the storm).  That sort of expertise could be handy again.

To his credit, he knows the US military and intelligence communities, their strengths and weaknesses, Central Command to Central Intelligence Agency.  He worked well with “The Interagency,” a frustrating confluence of bureaucratic rivers, defined by choppy water.  He had to navigate contradictory policies, combat and post-combat decision-making, integrating interests of Defense, State, intelligence, law enforcement, development and “host country” political processes – in America’s national interest.

Beyond four stars, Petreaus holds a PhD from Princeton.  He has taught, including counter-insurgency, and rewrote the doctrine with General Mattis, potential Secretary of Defense.  He likes creative thinking, flexible and adaptive response to soft targets, which are ultimately the hardest.  He knows combat operations, policy making, academics, and has an intuition for diplomacy, a formidable foundation.

More smooth and polished than constructively disruptive and Trump-like, Petreaus can speak the bureaucratic language, even as he unmakes a bureaucracy.  He thinks big, often outside the box, even though he came from it – knows chain of command, box of sand, four corners of cut orders.  His biggest weakness?  Ego, audacity, unforced errors, supreme self-assurance, with a weakness for press – although these can be advantages, and have been tempered by recent events.  Biggest strength?  Ego, can-do, a never say die attitude until job is done, which helped us win in Iraq, until the Obama White House reversed the win.

Value in picking Petreaus as Secretary of State, is deep.  He knows the world.  The world knows him – and respects him.  He would come to the position in the tradition of George C. Marshall and Colin Powell, former high ranking generals.  To that he adds recent combat and post-combat experience, helpful in what comes next.  In all likelihood, he would work well with Generals Flynn and Mattis, others in the Cabinet.  Confirmation by Congress would be swift.  He is well-spoken, candid and likely be grateful for being trusted anew.

The risks are not insubstantial.  Petreaus comes with wide knowledge, across several lanes of government, not least military and intelligence leadership; the difficulty for him, in cabinet and National Security Council (NSC) meetings, would be staying in his lane.  Powell did this very well, as did George C. Marshall, despite Marshall’s detractors on China policy.  But it is hard to do, allowing others to lead in areas assigned by a President.   Notably, Secretary Rumsfeld had a very tough time holding his tongue in NSC meetings; he often felt he knew better, and said so.  Sometimes he did; often he did not.  The habit gets old fast, no matter how smart the talker.

Another risk is the tendency of smart people to abandon team play for seemingly principled abdications or abnegations, especially when they have reason to believe that popular opinion may be with them.  In short, the mission – and it is president-elect Trump’s to define – must be all-consuming, no distractions, and no divisions within the national security team.

That said, on both risks, Petreaus must feel humbled.  He paid for errors with his reputation and misdemeanor criminal charges, for which Hillary Clinton, for worse, paid nothing.   If life is a teacher, President-elect Trump may assess that David Petreaus today is a different man, one steeped in knowledge, clear on lane and team play.  His leadership in diplomacy could be path-breaking.

Where does this leave the Trump team?  In a good place, actually.  David Petreaus would likely serve well, with distinction and resolve.  He would be a capable, seasoned, creative, a no-nonsense Secretary of State, powerful team player.  Rudi Guiliani would be equally strong, a devil-may-care, been-there-and-done-that leader, no fear of detractors, as he had no fear of the mafia.  And Mitt Romney would be a level head, steady voice in all weather, light and heavy.

Two last Petreaus stories, because he does have an uncanny knack for getting it right.  As an Assistant Secretary of State after 2003, my job was to make operational America’s international police training aspirations in Iraq, Afghanistan, Jordan, Kosovo and other locations.  In Baghdad, on more than one occasion, I found myself interacting with David Petreaus, who was working hard to train the Iraqi Army.

The two jobs were fraught with potential conflict, as well as operational challenges, like trying to build a car and win a race at the same time, blizzard landing without instruments.  There were no blueprints, unless you went back to MacArthur, post-World War II Japan.  We knew there would be blame for handing around, it always happens.  But Petreaus did not set picks.  Instead, he looked for ways to cooperate, make the process work.  Eventually it did.   State became a “support command” in Jordan, producing tens of thousands of civilian security officers to buttress needs identified by the “gaining command” in Baghdad, Petreaus.

One more example, demonstrating Petreaus’ foresight, and ability to relook old problems. My first trip to Baghdad, we cork-screwed into the airport, helicopters everywhere launching straight up, just as they did from the Green Zone.  At some altitude, they would tip to one horizon or the other.  Problem was, shoulder fire missiles; they were bringing American helicopters down.  Petreaus immediately changed procedures, pressing helicopters out low and fast, very low and very fast.  Shoulder fire missiles could no longer get a bead on us.  Immediately, the number of helicopters shot down fell, precipitously.  He saved American lives with his mind.  If there is one reason for bringing him back, that is it.  But net-net, the Trump pickings are good.