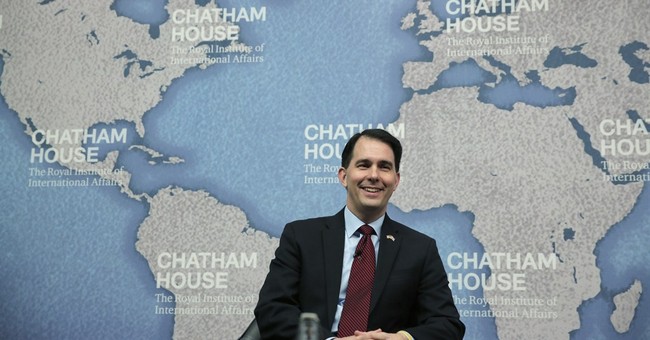 Make no mistake, Scott Walker is right about Ronald Reagan’s firing of the air traffic controllers, and the sobering impact this one decision – a domestic policy decision – had on the thinking of Soviet leaders. In short, Reagan’s decisive domestic leadership sacred the Soviet Union, which was not accustomed to an American President doing exactly as he said he would do. This decision by Reagan, made against the counsel of some of his senior advisors, had enormous implications for the Soviet Union – and theirs leaders knew it. While Walker’s media critics disparage the comment and Reagan’s onetime Soviet Ambassador blithely dismisses the assessment, Walker is exactly right. Here is the evidence.

For clarity, in 1981, nearly 13,000 air traffic controllers went on strike. They walked off the job for more pay and a shorter workweek. Despite the fact that the union had endorsed Reagan, this was patently against the law. It violated provisions of Title 5 U.S.C. and their contract, which expressly prohibited a strike by government unions. As the Nation worried about air travel – which the strikers knew they would – Reagan took to the air himself, and gave an Oval Office address. He said: If the air traffic controllers “do not report to work within 48 hours, they have forfeited their jobs and will be terminated.” As a young man, I worked in that White House and recall that speech vividly. Roughly 1300 controllers returned to their jobs, while 11,345 ignored the president’s demand.

Against the strikers’ expectations, and most public expectations, Reagan summarily fired the strikers who defied the law. Most never worked in the field again. This was the death knell for the union. It was decertified in 1981. To assure safety in the skies, Reagan deployed the National Guard controllers, swiftly training and hiring fresh talent. The world went on.

But not without notice. As a young man, I worked in the Reagan Administration and recall that particular speech vividly. Even then, global reaction was a matter of record. There was no question that the Soviets noticed, and within a year were sitting up straight themselves. That was August 1981, and by June 1982, the Soviets were on notice that – against the backdrop of the air traffic controllers’ decision – they were next in line. Reagan gave another speech, in this one declaring before the British Parliament, with Margaret Thatcher looking on, “the forward march of freedom and democracy will leave Marxism-Leninism on the ash heap of history.” The Soviet leaders were on notice.

Nine months later, Reagan said “Communism is another sad, bizarre chapter in human history whose last pages even now are being written.” These were profound words. They sent a chilling message to the Soviets. Why? Because this president was different. He did not waste words, did not say anything he did not believe, and had proven true to his word. He could turn into the wind of contrary expectations, and make real exactly what he believed. They were more than aware of what had happened with the air traffic controllers.

No move the clock ahead. In 1989, just as Reagan had predicted, the Soviet Union fell. Communism’s stranglehold on a beleaguered people – and suppression of their God-given freedom – was over. In 1992, Ed Meese, Reagan’s thoughtful and articulate former Attorney General wrote of the air traffic controllers’ firing: “The message to the nation was clear and the public response was highly favorable. We are informed, moreover, that this action had a sobering effect on the Soviet leaders, who also had become accustomed to seeing American presidents back down before a serious challenge. The PATCO [union firing] action convinced them that Reagan was someone who had to be taken seriously.”

Meese was hardly alone in his reading of the facts. Meese quoted Harvard Professor Richard Pipes, an expert in Soviet affairs, saying “The way the PATCO strike was handled impressed the Russians … and gave them respect for Reagan. It showed them a man who, when aroused, will go to the limit to back up his principles.”

But the coup de grace is this. At a conference in the early 1990s, held at Hofstra University and celebrating the life of Theodore Roosevelt, Edmund Morris was a speaker. He was already working on the Reagan biography. The topic of Reagan’s firing of the air traffic controllers – and the effect of this decision on the Soviet leaders – emerged. Without presuming to quote Morris or other attendees this many years later, the consensus based on actual conversations with some of those leaders, was that the firing had shaken these leaders. And for exactly the reasons that Governor Walker has recently cited.

The connection, depth of conviction and potential implications were too close for comfort. At least some of the Soviet leaders saw the writing on the wall. And it remains on the wall today. Only the Soviet Union – and the physical and spiritual walls, including the Berlin Wall, which held it up – are gone. Thank you Scott Walker, for reminding us – principles count, along with principled actions and long memories.