Elites in Washington Still Don't Get It 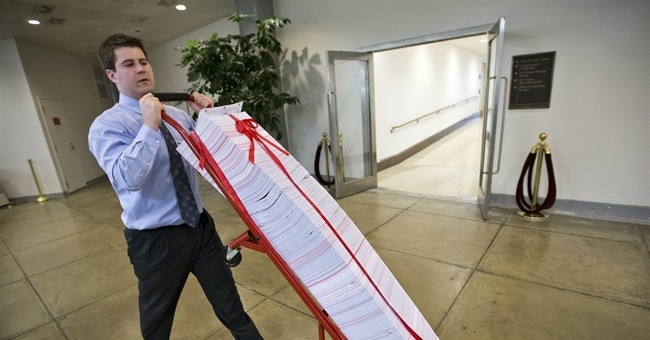 You may be hearing a lot these days about the growing separation of the elites in America from everyone else, about how those at the very top in our country are playing by a different set of rules and have different realities than the millions of working families across America. Well, I agree with this view, and sadly, I see it getting worse by the day. And nowhere is it as bad as it is on Capitol Hill.

The vast majority of the people we elect to represent us are good, honorable people who set off with nothing but the most genuine motives and desires to protect the interests of their constituents back home. But as we have seen, once they arrive in Washington, something takes hold of them. They enjoy new perks, new benefits and new comforts that quickly cause them to lose sight of why they are there.

One example of this that made some news recently is the Senate barbershop, which costs taxpayers more than $350,000 a year. Taxpayers are legitimately outraged that Washington elites appear to be getting cheap haircuts at taxpayers' expense. But it's even worse than that. When I was in the Senate, the barbershop was losing even more money, so I led the charge to privatize it. I was opposed by both parties. Congress refused to lease the space to a private entity to run the barbershop, but I embarrassed my colleagues just enough into making some changes to cut costs and increase the cost of a haircut.

So how well does the government run a barbershop? Well, in spite of charging $20 for a haircut, the barbershop still lost millions of your tax dollars because my proposal to privatize it was defeated. Now it seems that Senate Majority Leader Harry Reid has thrown in the scissors and conceded that the Senate is incapable of organizing and operating a simple barbershop, but of course, we are to trust it to organize and operate the nation's $2.7 trillion health care industry.

When I was a new member of the House of Representatives, I discovered another practice in Congress that would not be acceptable anywhere else. And that was that there was a bank in Congress that regularly allowed members of Congress to overdraft their accounts without penalty. Unthinkable, right? Thousands of checks were bounced, and the public had no idea the bank even existed. I got together with six other freshman congressmen, and in spite of opposition from leaders of both parties, we succeeded in stopping the abuse. We then focused on the operation of the bank, and -- surprise -- it was badly mismanaged. The bank closed, but that didn't stop Congress from passing several major bank "reform" laws giving the government more power over the management of our banks.

Fast-forward to this spring and you can see that Congress' hubris has gotten worse. The Democrats in Washington who foisted Obamacare on a reluctant America are now keenly aware of the huge problems they have created with the passage of the law. Health insurance premiums are going to more than double in some states, and the increased cost to the government will be in the hundreds of billions of dollars over the next few years. The answer from the public is to repeal it; even supporters of the law have called on Congress to repeal the unpopular parts. Some members of Congress obviously received the message, as there were bipartisan talks on the Hill to repeal it for themselves and their staffs. As employers, they are concerned they would lose hundreds or thousands of congressional staffers because of new health care costs. They don't care about the cost to you or your business; they just want to have their own set of rules.

Throughout my political career, I've attempted to do right by the many thousands of constituents back home who were just like my parents and my in-laws and, at one time, me. The millions of working American families don't get subsidized haircuts, free bounced checks or exemptions from expensive laws. No, they have to play by the rules and make ends meet. Why should those who represent us and create these rules behave any differently?

The elites in Washington and Wall Street are not going to understand the issues Americans face or be able to do anything to help us if they continue to have their own rules. We must not accept this any longer. What's good enough for the American people should be good enough for Congress. Maybe Obamacare will be the straw that breaks the camel's back.