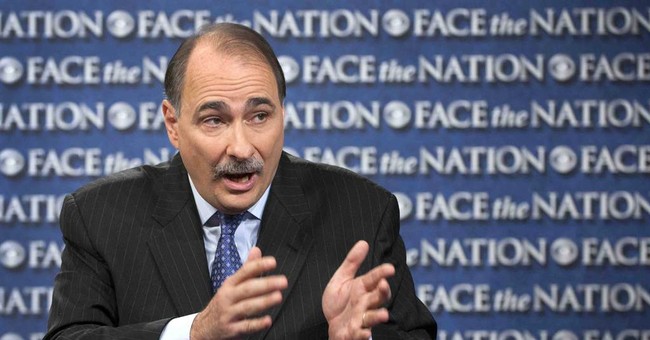 “Part of being president is there’s so much beneath you that you can’t know because the government is so vast,” the president’s former right-hand-man explained on MSNBC recently. He was attempting to defend Barack Obama, who says he didn’t know that the IRS was targeting conservative groups, or that the Justice Department had obtained the phone records of Associated Press reporters and editors. And don’t even get started on what the president didn’t know about Benghazi.

Axelrod’s defense, of course, doesn’t apply to the real world.

Since 2002, the federal government has required CEOs and CFOs to sign forms taking responsibility for the company’s financial reports. No matter how large of an empire they oversee, they could well be charged with a crime if an accountant fails to carry the two somewhere along the line.

By this standard, Obama would be responsible for the workings of his government because he’s the chief executive. One reason he told us he wanted the job was because he thought he could do it better than George W. Bush.

Axelrod’s stumbled across something important, even if he doesn’t realize it. The federal government is, indeed, too large and unwieldy. But instead of absolving the president of any blame, let’s take the logical step: cut the federal government down to its proper size.

The first step is to oppose comprehensive bills that attempt to solve all problems at once. They usually come too late, anyway: By the time Sarbanes-Oxley (aimed at preventing corporate misdeeds) had been enacted, Enron and Arthur Anderson were out of business. Or consider the farm bill, 80 percent of which gets spent on welfare programs that have nothing to do with farming. There will still be food even after Washington gets out of the farming business.

The two most recent examples, of course, are Obamacare and Dodd-Frank.

The former is beginning to take a toll this year, and will only become more costly as the years roll by. It attempts to regulate health care. Not by promoting free-market principles that would allow patients to understand costs and make sensible decisions, but by attempting to expand the failing model of providing coverage through employer-subsidized health “insurance” plans.

This is a relic left over from World War II, when workers were scarce and employers used benefits -- free health care, for example -- to lure workers. With the Nazis permanently defeated, our country ought to revamp its health care system to put people in charge. When we are truly aware how much various procedures cost, we’ll make better decisions and use health care more wisely.

As Rep. Paul Ryan puts it, “big government is bad in theory, but it’s much worse in practice. And effective government, that is good government that’s limited, focuses in on our core duties.”

That’s not what we have now. Even worse, it seems that nobody is in charge. The president assures us he had no idea his Department of Justice was seeking phone records from AP reporters. He insists he had no idea the IRS was giving special scrutiny to Tea Party groups.

Even if we take him at his word, that means accepting the fact that no elected official can control the bureaucracy. You may think you’re voting for “change” when you cast your presidential ballot, but you’re really just a sucker, picking someone who will learn – at the same time you do -- about all the great things that are being done by “the government.”

Joe Postell writes that this is because the administrative state is an unelected fourth branch of government, one which isn’t controlled by the executive or legislative branches. Presidents come and go, at predictable intervals. Career civil servants, with permanent job status, can survive most scandals.

For example, in the current IRS brouhaha, Politico notes that “most employees involved in the targeting program are covered by protections for federal workers that could drag out the termination process.” No bureaucrat has been fired yet, and don’t hold your breath until one is.

As a start, Postell urges Congress to reassert its lawmaking power, the president to take more control of executive branch actions, and encourages courts to supervise the actions of bureaucrats more closely.

Bigger government isn’t better. That’s the lesson of a century of failed Progressivism. It’s a lesson we’re all going to learn the hard way in the years ahead, unless we take steps to reduce the power and permanence of bureaucrats.