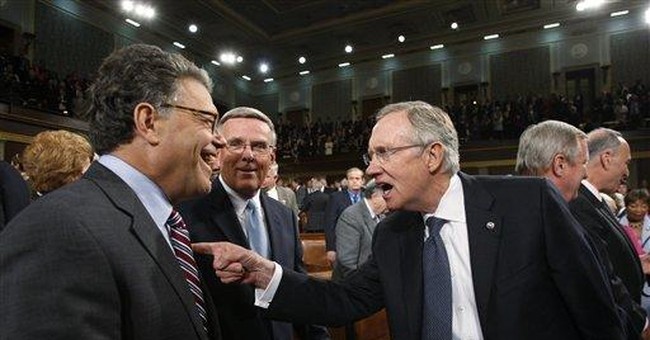 Maybe August was simply a long dream (or nightmare, for some politicians). Our leaders spent the month in town hall meetings, hearing from citizens who want nothing to do with government-controlled health care.

But with August over, President Barack Obama addressed a joint session of Congress to say, basically, never mind what happened last month. “Now is the season for action,” Obama declared, in the course of a speech that advanced few new ideas and could pretty much have been written in July, or even January.

So let’s have a closer look at Obama’s words, and delve into what they would actually mean.

“Everyone understands the extraordinary hardships that are placed on the uninsured, who live every day just one accident or illness away from bankruptcy,” Obama declared. “More and more Americans worry that if you move, lose your job, or change your job, you’ll lose your health insurance too.” And that’s true as far as it goes. But it raises a question that must be answered: Why?

If I get fired today, I would indeed be without health care. If my bad day got worse and I was killed in a car accident on the way home, though, I’d still have life insurance to carry my family through. I’d still have car insurance so they could replace the vehicle. If I make it home only to find my house has burned down, I’d still have homeowner’s insurance to rebuild it.

That’s because those forms of insurance are purchased by individuals, not provided through an employer. And that’s the way things should be. An open market would allow our country to begin developing real competition for health insurance.

Obama misses the point entirely. He later added that, “under my plan, individuals will be required to carry basic health insurance -- just as most states require you to carry auto insurance.” Clever. But misleading.

You can, after all, choose to not have a car. That makes grocery shopping more difficult, but saves a bundle on car insurance. You cannot choose not to live. So if Washington is going to mandate that everyone have health insurance, that’s a requirement you won’t be able to escape from.

One thing that was especially surprising about Obama’s address is that he stuck with a talking point that’s been thoroughly debunked. “Nothing in this plan will require you or your employer to change the coverage or the doctor you have,” the president declared. “Let me repeat this: nothing in our plan requires you to change what you have.”

Further, if the federal government is going to write exacting regulations that all insurance companies must follow, it’s no longer correct to say those companies are private insurers. They become arms of the government, obeying its regulations and unable to compete based on price or service -- and it’s competition, after all, that brings down prices and improves service.

So when he says, “all insurance companies that want access to this new marketplace will have to abide by the consumer protections I already mentioned,” Obama is really spelling out the end of private insurance as we know it. So much for the canard that if you like your current coverage, you can keep it.

So how can our country, mired in recession, afford all this? “We’ve estimated that most of this plan can be paid for by finding savings within the existing health care system -- a system that is currently full of waste and abuse,” Obama said. “Too much of the hard-earned savings and tax dollars we spend on health care doesn’t make us healthier. That’s not my judgment -- it’s the judgment of medical professionals across this country. And this is also true when it comes to Medicare and Medicaid.”

Fair enough. Both those federal programs are, indeed, going broke. But if there are big savings to be had there, why haven’t our leaders done that already? The budget deficit this year alone will top $1 trillion, a number too large to really comprehend. Before the government goes off spending more, it ought to identify the waste in the current system and eliminate it.

Summer is over, and it’s time for lawmakers to go back to work. Having listened to the president, it’s clear they have a long way to go to develop a workable plan.