An Obit for the "Grey Lady" 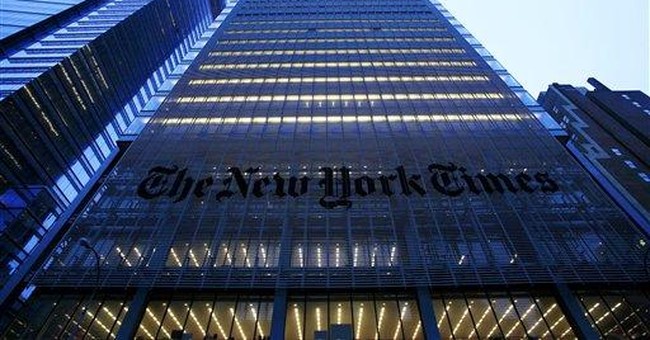 The first thing they teach you in journalism school is to get a subscription to The New York Times. It’s also the final thing they really need to teach you.

Any observant student can see that what’s on the front page of the Times often ends up leading the network newscasts that evening. Other newspapers also play follow-the-leader, either by directly republishing Times stories or by aping the “gray lady” in style (liberal, stilted) and appearance (dull, drab).

As an aside, there’s a CNN corollary to this. The cable network often steals story ideas from The Wall Street Journal. If that paper has a story on Monday about how food companies are charging the same amount for smaller packages, expect to see a CNN reporter live on Tuesday in a supermarket, holding up bags of potato chips. “Smaller bag, same price. Back to you in the studio.”

In any event, any aspiring journalist with a subscription to the Times and the Journal can go ahead and skip the last four years of J school; for a few hundred bucks a year he knows all he needs to know about what stories will be covered and how they’ll be reported. But the Times may not be with us for much longer.

“With more than $1 billion in debt already on the books, only $46 million in cash reserves as of October, and no clear way to tap into the capital markets (the company’s debt was recently reduced to junk status), the paper’s future doesn’t look good,” wrote Michael Hirschorn in The Atlantic’s January-February issue. “Regardless of what happens over the next few months, The Times is destined for significant and traumatic change.” Further, “At some point soon -- sooner than most of us think -- the print edition, and with it The Times as we know it, will no longer exist.”

Hirschorn writes as if this would be a sad development. But in reality, it’s probably a good thing.

The problem with much of American print journalism is that it’s too dull. Critics like to make fun of USA Today, calling it “McPaper.” But there’s a reason it has the highest circulation in the country: It’s at least interesting. That’s the same reason the New York Post and New York Daily News survive and even thrive, although they’re competing for the same market. They’re both fun, readable and compelling.

The Times, meanwhile, is the voice of an outdated liberal establishment. It chooses to ignore news it doesn’t like. For example, the April 15th Tea parties were buried on page 16 of the print edition, and mocked even there.

“Although organizers insisted they had created a nonpartisan grass-roots movement, others argued that these parties were more of the Astroturf variety,” sniffed reporter Liz Robbins. Somehow the paper had half a dozen reporters following the story, but managed not to print the fact that more than 5,000 people gathered in New York City alone.

The paper bungles the news in the stories it does cover. The April 16 Times’ front page featured a march in Afghanistan, where some 300 women turned out to protest a new law that severely limits the rights of women. “Women are mostly illiterate in this impoverished country, and they do not, generally speaking, enjoy anything near the freedom accorded to men,” the paper noted.

What’s changed? Well, women in Afghanistan today have the ability to protest only because the United States led a coalition to remove the Taliban in 2001 and allow an elected government to run the country. That’s the sort of fact that never seems to make The New York Times’ front page.

Sadly, this is the model so many newspapers across the country have chosen to follow. However, the failure of the Times could begin to change that.

This brings to mind the breakup of AT&T in 1982. At the time it seemed frightening to many. Here was a model that had worked for decades -- what would happen to the telecommunications industry without its giant leader?

What happened was competition. First in long distance, eventually in wireless technology. Today the very idea of a “long distance call” seems quaint. Virtually any call can be placed on a cell phone, and almost everyone has hundreds, even thousands, of minutes per month. However, this new world of portability and convenience wouldn’t have come about if AT&T had retained its monopoly.

As Mark Steyn noted on National Review’s “The Corner” blog recently, “The net result of the industry’s craven abasement before the Times is that American newspapering is dead as dead can be.” Sad but true.

Maybe, though, the death of one big paper will lead to the rebirth of many others.