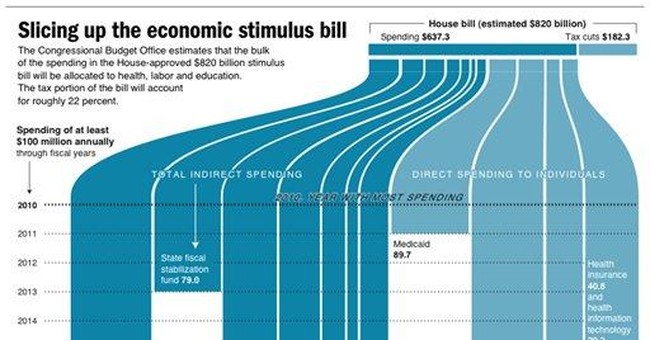 Maybe President Barack Obama should go back to school. He seems overwhelmingly popular on at least one college campus.

“Wear a helmet. Barack Obama does,” reads a sign outside a Chapel Hill, N.C. bike shop. Another store offers comic books telling Obama’s life story and casting him with various superheroes, presumably to save the world.

And indeed, Obama seems convinced that he can save the American economy. “Each day we wait to begin the work of turning our economy around, more people lose their jobs, their savings and their homes,” the president wrote in The Washington Post on Feb. 5. “That’s why I feel such a sense of urgency about the recovery plan before Congress.”

Obama’s article goes on with the usual campaign-style rhetoric about how many jobs he’ll “create or save” (the “save” is a nice touch, since it’s impossible to put an actual number on “saved” jobs) in the years ahead. But when he tries to provide details, his “stimulus” plan loses its luster.

“This plan is more than a prescription for short-term spending -- it’s a strategy for America’s long-term growth and opportunity in areas such as renewable energy, health care and education,” Obama asserts. He adds the plan “will be implemented with unprecedented transparency and accountability, so Americans know where their tax dollars are going and how they are being spent.”

Well, National Review Online looked at some of the programs the bill would fund. It includes $15 billion to increase Pell Grant scholarships. Wait -- this bill is supposed to put people to work, not send them to school.

The bill would also provide $7.6 billion for “rural community advancement programs.” Maybe the idea is to get the unemployed out of the cities and put them to work in the fields? There’s also $6.2 billion for the Weatherization Assistance Program. Hopefully Old Man Winter won’t end up getting laid off.

“In recent days, there have been misguided criticisms of this plan that echo the failed theories that helped lead us into this crisis,” Obama warns. Those criticisms include “the notion that tax cuts alone will solve all our problems.” Ironically, though, this bill now features the worst of both worlds: The wrong sort of tax cut and an enhancement of the very policy that triggered the economic downturn.

Republican senators added a provision to the “stimulus” bill that would provide a $15,000 tax credit to anyone who buys a home this year. This ignores the fact that it was the government’s encouragement of home buying that led to the credit crisis our economy is now suffering through.

Federal policies helped create a bubble which, when it popped, brought down lenders and endangered the entire banking system. This tax credit -- which the bill’s proponent Sen. Johnny Isakson, R-Ga., admits would cost $19 billion in tax revenue -- could actually create another housing bubble.

Obama adds that Americans “voted resoundingly for change” last year. Thus, he writes, we shouldn’t “let Washington’s bad habits stand in the way of progress.” But the fact is that this bill, far from being a break with the past, simply represents liberal policies writ large.

There are the usual big spending programs aimed at permanently expanding the size and scope of the government. They include $4 billion for job-training programs, $1 billion for the Census Bureau and $4.5 billion for U.S. Army Corps of Engineers (which already has more money than it knows how to spend). And the bill aims to expand the Energy Department and the Education Department, when a better approach would be to shutter both.

All this has been sadly predictable for years.

In 2003, for example, The New York Times magazine did a feature story on the Center for American Progress, a new “think tank” founded by former Clinton aide John Podesta. The group was supposed to develop liberal -- or as they prefer to call them, “progressive” -- policy prescriptions. “We’ve got to fill the intellectual pail a little,” Podesta told reporter Matt Bai.

The CAP turned out to be a marketing machine, not an idea factory. It focused on attacking President Bush (mission accomplished) and ignored the work of developing big liberal ideas. So today, to judge by this bill, there still aren’t any.

Look at it this way: Obama’s correct that people voted for “change.”

But imagine if he’d told us that that his first action would be to ram through a $1 trillion spending bill. Would people have supported that “change?” Would senators such as Mark Warner of Virginia been elected if they’d admitted that ramming through an unprecedented level of deficit spending would be their first action? It’s doubtful, at best.

The country needs a change -- smaller government and a growing economy. The current stimulus bill, however, would only take us in the wrong direction.