The Permanent Campaign Soldiers On 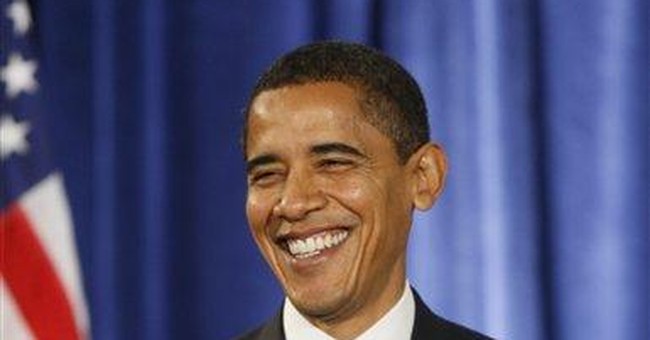 It was back in the early days of the Clinton administration, perhaps, that the lines began to blur. Bill Clinton appointed key members of his campaign message team to his White House staff. Guys like George Stephanopoulos realized campaigning was easier than governing, so the unending campaign was born.

Let’s face it: People expect to be misled during a political campaign. Candidates promise to deliver jobs, slash taxes, control spending and dozens of other things that we know, once in office, they’ll be unable to deliver.

President-elect Barack Obama engaged in that during his own campaign, of course. His “tax cut for 95 percent of Americans” isn’t likely to materialize, for example. Those gullible enough to vote for him on the strength of that promise deserve whet they get.

Problem is, some weeks after the election, Obama’s still at it -- making campaign promises instead of actual plans.

Consider his big economic plan, announced over the weekend. He’s purportedly “developing a plan to create or preserve 2.5 million jobs over the next two years by spending billions of dollars to rebuild roads and bridges, modernize public schools and construct wind farms and other alternative sources of energy,” The Washington Post’s front-page story announced.

Wow. What a great idea.

Our country has been cursed with some foolish leaders, and blessed with some great ones these last two centuries. Isn’t amazing that nobody ever thought of this before? Apparently, when asked whether the government can eliminate unemployment, its answer is supposed to be, “Yes we can.” Now, few reporters seem to think President Bush is the smartest man to ever occupy the Oval Office. But they need to ask themselves, “If Washington can create these jobs, why didn’t he do so?”

Clearly Bush would be leaving a better legacy if he could create jobs by, say, building wind farms.

The evidence that Obama’s plans won’t work is right there in the same newspaper.

“The federal government has invested billions of dollars over the past 16 years, building a fleet of 112,000 alternative-fuel vehicles to serve as a model for a national movement away from fossil fuels,” another front page story began. “But the costly effort to put more workers into vehicles powered by ethanol and other fuel alternatives has been fraught with problems, many of them caused by buying vehicles before fuel stations were in place to support them.”

In fact, the government’s green plans have actually made things worse.

The Postal Service, for example, deployed thousands of flex-fuel vehicles last year, which have larger engines than the gas-powered ones they replaced. Many of the bigger vehicles were still run using only gasoline, however, because flex-fuel (E85) stations are rare -- there are only 1,689 nationally, compared to more than 160,000 regular gasoline stations. That means postal trucks wasted an additional 1.5 million gallons of gas last year alone.

“I call it the Field of Dreams’ plan. If you buy them, they will come,” Wayne Corey, the Postal Service’s vehicle operations manager, told the Post. “It hasn’t happened.” And it won’t happen just because the government orders it to happen.

When Washington tries to create jobs, it must first tax productive citizens or borrow the money it intends to spend on job programs. This leaves less money available in the private sector, which thus ends up creating fewer jobs.

Meanwhile the federal government tends to crowd out private investors. T. Boone Pickens, for example, seems committed to building wind farms all over Texas. At least, that is the impression his endless series of ads on cable news networks leave one with. So, let him do that. Why does our government need to invest tax money in a project a billionaire is willing to finance? It’ll simply force Pickens back into the oil business.

By the end of the Obama administration, there may well be 2.5 million new jobs in our economy. That because the current slowdown, like all slowdowns, will end, and the economy will grow again.

But when it does, it’ll be because of private industry, not the government, creating jobs. When the campaign finally ends and the governing begins, the Obama administration would be well advised to realize that.