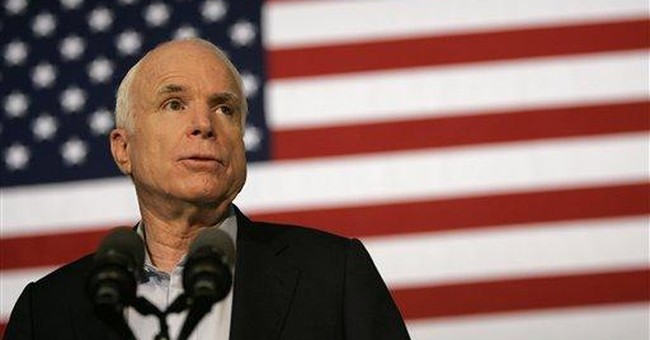 “Don’t knock it until you’ve tried it,” my grandmother used to say when serving a food that seemed, let us say, unappetizing. The same advice ought to be applied to public policy.

In the Outlook section of The Washington Post recently, Greg Anrig, vice president of programs at the Century Foundation, gloated that conservatism is in decline, slowly being replaced by what he labels “progressive” ideas. These days, he writes, “conservatives are the ones who are tongue-tied, as demonstrated by Sen. John McCain’s limping, message-free presidential campaign.”

Well, hold the phone for just a moment, there.

First, John McCain is anything but a full-throated voice for the conservative agenda. He’s better than, say, Barack Obama. But McCain earned his vaunted reputation as a “maverick” by often opposing conservatives on issues such as judicial nominations and tax cuts. That’s why, during the Republican primary process, conservative publications such as National Review went all out for Mitt Romney.

Next, let’s look at what Anrig lists as conservatism’s failures, since it could instead be read as a list of partial successes. “They [conservatives] advocated creating health savings accounts, handing out school vouchers, privatizing Social Security, shifting government functions to private contractors, and curtailing regulations on public health, safety, the environment and more.”

Let’s take just a few of these examples. Health savings accounts are the single good feature that was included in the bill that created Medicare Part D. That legislation added a massive new entitlement (putting the federal government on the hook to buy prescription drugs for seniors) to an already-too-expensive entitlement program.

HSAs are the opposite of a government subsidy. They allow individuals to control their own health care. And they allow healthy people to save up money in accounts they control. By putting the customer in charge, HSAs encourage patients to shop for value and be concerned about price -- thus bringing free-market principles to bear on health care.

It’s too soon to claim HSAs have worked, but they certainly haven’t failed. In fact, they deserve to be expanded.

How about the next item: school vouchers?

Here’s another conservative idea that is working, but remains, as they say in Hollywood, in “limited release.” In the nation’s capital, for example, the D.C. Opportunity Scholarship program allows some 1,900 children to attend the school of their choice, instead of the “government school” they’d be assigned to.

Studies by the Department of Education and Georgetown University show parents are happier with the voucher program. Meanwhile, separate studies show test scores are higher for students with vouchers than those without.

So why aren’t vouchers more widespread? In many places, so-called “progressives” have managed to block their use by applying a 19th century legalism: Blaine Amendments. These were originally written into the constitutions of dozens of states when anti-Catholic fervor was running high. It puts the left in the unusual position of supporting xenophobic laws -- not much “progressive” about that.

Finally, Anrig cites “privatizing Social Security” as a failure. It’s true that conservatives failed to get personal retirement accounts added to Social Security. But that doesn’t mean PRAs wouldn’t work; it just means they’ve never been tried. If nothing else, conservatives have successfully called attention to the funding problems behind the impending entitlement crisis.

Meanwhile, the left insists Social Security is on solid ground (it isn’t) and that, anyway, we could save it by raising taxes (we can’t). Talk about failed ideas.

On foreign policy, too, Anrig fails to convince. The Bush administration “has weakened our security -- most notably through the unnecessary calamity in Iraq -- by diluting our military capabilities and diverting their focus from genuine threats from al Qaeda.”

July’s American death toll in Iraq was the lowest since the war started in March of 2003. Al Qaeda has been devastated, and may never recover. Our homeland hasn’t been attacked since 2001. Who would have predicted that six years ago?

It looks as though American troops may be withdrawn from Iraq on a timetable favored by Sen. Obama -- but only because the “surge” he opposed and insisted wouldn’t work has, indeed worked. Around the globe, conservative foreign policy ideas are being vindicated every day.

Conservatism -- free markets, privatization and assertiveness abroad -- has worked --when it’s been tried. The question this election year isn’t “is conservatism dead,” it’s “do we have the will to expand policies that are already working well.” Time will tell.