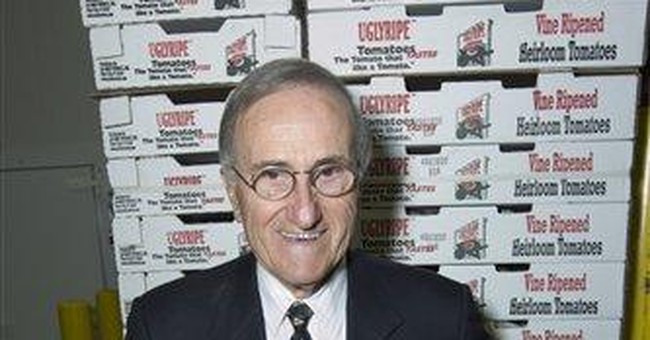 What a relief to see the sign at the Subway restaurant: “We have tomatoes, approved by the FDA.” In the event, I didn’t want tomato on my sandwich, but it’s good to know the government is looking out for me.

I did take a big chance by asking them to load up on salad spinach. As New York Times humor columnist Paul Krugman put it last year, “Yesterday I did something risky: I ate a salad.” Rim shot, please.

Krugman’s concern then was with E. coli bacteria, which had been found on some spinach. One person died as a result of that contamination. Subway was worried about tomatoes because of a salmonella outbreak that has made at least 167 people sick.

No doubt some will join Krugman, one of the country’s most famous sufferers of Bush Derangement Syndrome, in blaming this latest misfortune on the president.

“Without question, America’s food safety system has degenerated over the past six years,” Krugman asserted. How could he be so sure? Because there haven’t been any new federal regulations. “What we do know is that since 2001 the F.D.A. has introduced no significant new food safety regulations except those mandated by Congress,” he wrote.

And that, in a nutshell, is the problem: For many people today any problem, no matter how large or small, calls for federal intervention. In this view, as long as Washington is passing new regulations -- i.e. “doing something” -- it’s doing its job. Few stop to wonder if new regulations are helpful, or even necessary.

In recent months, the collapse of the subprime lending market has given politicians plenty of chances to insist that Washington ought to “do something.” But as blogger Megan McArdle pointed out at theatlantic.com, nobody’s laid out a regulatory plan that would have prevented the mortgage mess. “There’s no real evidence that the problem in the housing market was supply-side, rather than demand-side, fraud,” she notes.

In fact, it’s the free market that tends to keep companies honest, not the government.

Banks and other financial institutions try to make money -- that’s how they stay in business. “Profit, in this case, [is] a pretty strong motive for doing what we want them to do: avoiding catastrophic failures. That’s why I think that a powerful regulatory body is only an unquestionable win if you have some reason to think that it will be smarter than the banks,” McArdle writes. And there’s no reason to expect financial geniuses will line up to work as regulators at government salaries.

Another problem with regulation is it tends to hit after the fact. Remember Enron? It folded in 2001, taking billions of dollars with it. Investors had poured their money into the stock, even though it was unclear what, exactly, the company did. Enron’s collapse also destroyed Arthur Anderson, the accounting firm that had signed off on its books.

That alone would have been enough to fix up the accounting industry. After all, no company wants to go out of business. However, Congress wanted to chime in, too. It passed Sarbanes-Oxley, a bill meant to guarantee companies would provide honest financial reports.

But the main result of the law has been to make it more difficult to launch a business here. Wall Street was once king of the Initial Public Offering, but these days many companies choose to be listed in London or Hong Kong so they can avoid American regulatory red tape.

“Sarbanes-Oxley was an overreaction to the aftermath of the Insanity.com era,” John Fitzgibbon Jr. of IPOscoop.com said a couple of years ago. “It’s added a lot of expenses onto these companies.” And the long-term effects of this over-regulation are yet to be felt.

To come back to food, of course everyone wants to know that everything we eat is clean and safe. But there’s no way the government could even afford to hire enough people to inspect every apple picked, every tomato shipped and every lettuce leaf on every sandwich. If it tried to do so, suddenly a salad would be so expensive nobody would ever buy one.

Yet our food supply is safer than ever in human history. Farmers and companies strive to supply safe, healthy food, and they’re doing so every day. The days of the stomach-turning Chicago packing houses described in Upton Sinclair’s “The Jungle” are long over, and never coming back.

The best way to make our food safer and our lives better is, ironically, to keep regulators out of our kitchens, out of our homes and out of our lives. What will protect us in the future is free-market policies.

A Group Of Parents Sent Their Kids' Face Masks to A Lab for Analysis. Here's What They Found
Townhall
Washington Post looks into anti-blackness and transphobia in the Byzantine Empire to help us understand the roots of hatred
Twitchy
Peter Doocy Muscles Way in to Ask Biden About China, Gets Answer That Should Alarm Everyone
Redstate
LOSING IT: Read Lori Lightfoot’s DERANGED Emails to Staff
PJ Media