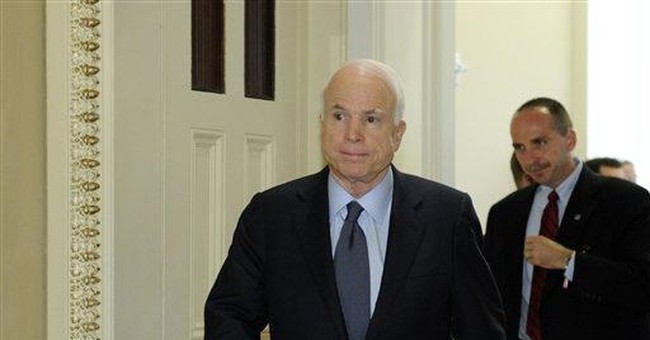 All year, John McCain has been like the proverbial cartoon character over the edge of the cliff, in midair, desperately flapping his arms and somehow maintaining altitude. On top of an already toxic environment for Republicans, two weeks ago came the financial mess, Hurricane Lehman blowing away the tie McCain had, through grit and improvisation, managed to forge in the presidential race.

The McCain campaign thought it was falling into the abyss immediately after the crisis broke and McCain made his notorious "fundamentals of the economy are strong" statement. He buoyed himself by blasting away at Barack Obama's ties to the failed subprime merchants Fannie Mae and Freddie Mac, and giving a mad-as-hell populist speech in Wisconsin blasting the corruption and incompetence of Washington and Wall Street.

Then, he made the conversation-changing move of "suspending" his campaign and calling for a delay of the first presidential debate so he could rush back to Washington, supposedly to help seal the financial bailout deal. McCain, incredibly enough, hasn't crashed to earth. The Wall Street Journal/NBC News poll has McCain only trailing Obama by 2 points, and the Gallup tracking poll has them tied.

McCain's challenge at every juncture has been to shake up the campaign. He's like a Democrat trying to win the White House in the middle of the Civil War after Sherman took Atlanta. Or like a Republican running in the Great Depression. That means making moves that mark him as different, but can be seen as risky or gimmicky, whether choosing Sarah Palin as his vice-presidential nominee or canceling the first day of the Republican Convention during Hurricane Gustav. And never looking back, in a three-yards-and-a-cloud-of-dust mentality.

Does Palin know enough to be a national candidate right now? No, but she can be mostly walled off from the press. Will attacking Obama on Fannie and Freddie open McCain to attack because one of his top aides lobbied for the organizations? Yes, but he can bulldog through it. Is going to Washington going to help much of anything? Probably not, but the symbolism matters. All the unconventional moves risk eroding McCain's reputation as a steady hand, but the alternative is simply being overwhelmed by the gravitational pull of the public's desire for change.

Obama, on the other hand, owns change, but has to seem reliable and trustworthy. So he displays cool equanimity to McCain's heated turbulence. He has ice in his veins to McCain's Tabasco. McCain says stop everything to deal with the financial crisis; Obama says the campaign can go on even as a bailout bill is written in Washington. McCain wants to rip up the debate process as long established by the sainted bipartisan debate commission; Obama wants to stick to established procedure.

Obama's demeanor the past two weeks has been excellent by typical standards. He has often been talking calmly and deliberately before American flags in reassuring events with a presidential feel. In the Wall Street Journal/NBC poll, a majority says Obama would be able to handle a military crisis as president. But McCain's anger, usually a worrisome quality in a presidential candidate, has resonance given a public mood somewhere between Watergate and the stock-market crash of 1929. According to the Wall Street Journal/NBC poll, McCain leads among independents by 13 points.

For many voters, McCain probably isn't hot enough. He hasn't yet called for public hangings, after all. If the financial crisis and the bailout that is generating angry calls to all congressional offices had hit several months ago, a Ross Perot-style candidate would undoubtedly have emerged. Who knows? Lou Dobbs might have been pulling a third of the presidential vote by now.

It's too late for a Perot figure, so McCain is doing his best impression of one. It's the latest move that has kept him suspended over thin air, believing -- and hoping in November the electorate makes it so -- that he can fly.