Is Phil Gramm to Blame? 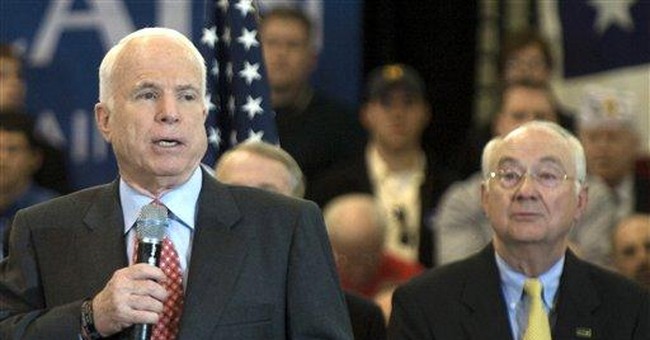 Who's responsible for the panic of 2008? In the gathering legend, it's one man, former Sen. Phil Gramm, the ex-John McCain adviser who lamented "a nation of whiners" a few months ago and therefore is fit to have responsibility for one of the nation's worst financial crises heaped on his head.

Gramm's gravest alleged sin is pushing the 1999 Gramm-Leach-Bliley bank deregulation bill. Barack Obama has identified the legislation as ground zero of the financial implosion, the deregulatory predicate for Wall Street's excess. As a Texas conservative who afflicted liberaldom for years before decamping to Wall Street, Gramm is easy to vilify. That doesn't make the case against him any less unjust.

The law allowed commercial and investment banks to consolidate, repealing the New Deal-era Glass-Steagall Act that prevented banks from offering customers insurance, investment or commercial banking services. Gramm-Leach-Bliley tore down the artificial walls between financial institutions. Was this the disastrous mistake that it is now portrayed as on the stump? No.

One, Democrats in good standing supported the final bill. Robert Rubin and Larry Summers, Clinton Treasury officials whom Obama relies on for advice, supported it. Joe Biden voted for it, it passed the Senate with 90 votes, and President Clinton signed it. Heaven knows, Washington can make bipartisan mistakes, but if the bill were so obviously the road to financial perdition, presumably some of these Democrats much keener to regulate the economy than Gramm would have voted "no."

Two, the bill was a foregone conclusion. Europe already had so-called universal banking in which financial institutions could undertake varied operations. U.S. banks were finding loopholes in the law to keep up with foreign competitors, and increasingly bumped up against the 60-year-old regulatory constraints. The Gramm bill just blessed the world as it was already evolving.

Three, the legislation appears to have alleviated the current crisis rather than making it worse. Big, diversified financial institutions have been weathering the crunch better than anyone else and have occasionally swooped in to lessen the pain. Bank of America acquired Merrill Lynch, which would have been impossible prior to Gramm's deregulation. Otherwise, Merrill would either have gone under or been bailed out by the taxpayers. Similarly, J.P. Morgan wouldn't have taken over Bear Stearns, and Barclays Bank wouldn't be considering buying Lehman Brothers.

Indeed, we've witnessed the end of the era of the large investment bank, with the dramatic decision of the last two firms standing, Goldman Sachs and Morgan Stanley, to transform themselves into traditional bank holding companies. The investment-bank model of relying on short-term markets for funding was no longer workable. Instead, Goldman and Morgan will rely more on less risky sources of funding, as regular banks do. Would we really want a 1930s law saying, "No, sorry, you have to remain pure investment banks and go bust"?

The root of this crisis is subprime loans lavished on people who couldn't truly afford their homes. This bad debt was securitized -- i.e., chopped up -- and spread throughout the system as complicated financial instruments. Gramm makes an unlikely villain here, since he always opposed the rush to give marginal borrowers mortgages -- and took hell for it from left-wing activist groups -- and his deregulation didn't create securitization or other financial exotica.

It's the very word "deregulation" that galls Gramm's critics. In their simplistic morality play, anything promoting it must be to blame. But Fannie Mae and Freddie Mac were practically arms of the government ("government-sponsored enterprises") and still did more than any other institution to spread the bad debt before requiring a bailout themselves.

It's certainly possible to fault lax regulation. The Securities and Exchange Commission's 2004 decision to allow the investment banks to double their leverage looks foolhardy. But the mistakes and mania that created this crisis can't be attributed to one man. In other words, Barack Obama and every other Democrat should lay off their scapegoat of the hour.