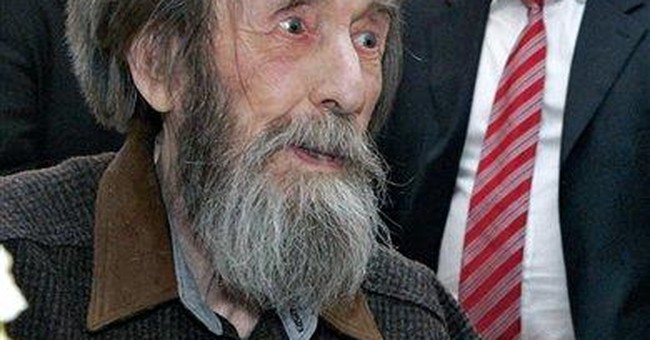 -- Soviet apparatchik Yuri Andropov, upon learning of "The Gulag Archipelago"

Andropov knew whereof he spoke. When Aleksandr Solzhenitsyn's three-volume chronicle of the Soviet prison system appeared in the West in the early 1970s, it delivered a decisive blow to the moral standing of Soviet communism.

The book attained its power not just as a memoir, a philosophical reflection and a historical account of the gulag, but as a profound work of literature. Solzhenitsyn gave it the subtitle "an experiment in literary investigation." He believed that the Soviet system, even with an apparatus of a mighty state at its disposal, couldn't survive the threat of truth expressed through art.

In his Nobel lecture in 1970, Solzhenitsyn spoke of how "the convincingness of a true work of art is completely irrefutable." The ultimate weakness of Soviet communism was that it was built on deceit: "Violence finds its only refuge in falsehood, falsehood its only support in violence." In its testament to the truth, art disperses falsehood and then "the nakedness of violence will be revealed in all its ugliness -- and violence, decrepit, will fall."

Forty years ago, that prophecy seemed outlandish. It came to pass in no small part through the literary exertions of Solzhenitsyn, who has died at age 89, a moral giant who witnessed evil and fought it with every fiber of his being.

A loyal communist, he was arrested in 1945 for a disparaging reference to Josef Stalin and sentenced to eight years in the camps. Rehabilitated during the Nikita Khrushchev thaw, he was allowed to publish his novella of prison life, "One Day in the Life of Ivan Denisovich," before the Kremlin clamped down again. After smuggling two novels for publication outside the country, he was awarded the Nobel Prize. When "The Gulag Archipelago" appeared, the Soviets determined to rid themselves of this famous and outspoken dissident by exiling him from the country.

In "The Gulag," he showed how the Soviet system wasn't perverted by Stalin in the 1930s, but was murderous from the beginning, the sulfurous spawn of a Vladimir Lenin determined to rid Russia "of all kinds of harmful insects." He argued convincingly that Soviet communism was as evil and destructive as Nazism. But the central insight of Solzhenitsyn's work is not political or historical, but moral.

In his suffering, he gained insight into the twistedness of the human heart. "Gradually it was disclosed to me," he writes, "that the line separating good and evil passes not through states, nor between classes, nor between political parties either -- but right through every human heart -- and through all human hearts."

This deeply humane understanding of evil is anathema to a political ideology like communism that draws bright, artificial lines between the chosen people and their enemies, thus justifying unimaginable acts of sadism. "Thanks to ideology," Solzhenitsyn writes, "the twentieth century was fated to experience evildoing on a scale calculated in the millions."

Solzhenitsyn's suffering in the camps saved him from ideology: "It was only when I lay there on rotting prison straw that I sensed within myself the first stirrings of good." And for that, he made the astonishing exclamation, "Bless you, prison, for having been in my life!"

Such a man wouldn't bend to any party or fashion. Soon after his exile, he gave the commencement speech at Harvard. He began by noting that "truth is seldom pleasant; it is almost invariably bitter," then proceeded to scourge the West for its moral decadence. He was right about much, even if he underestimated the reserves of resolve in a West about to see the rise of Margaret Thatcher and Ronald Reagan.

Solzhenitsyn stands as an inspiration to lonely dissidents the world over, and as a testament to the power of art. He quoted Fyodor Dostoevsky in his Nobel lecture: "Beauty will save the world." He maintained that those were more than mere words, and proved it to be so. RIP.