In McCain's Travails -- A Lesson From Hillary 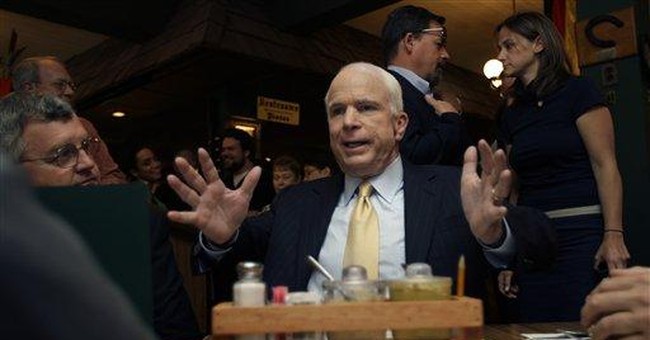 Politically, John McCain should be a candidate for involuntary committal -- he's a danger to himself.

If McCain is going to have a chance, he needs to run an un-McCain-like campaign, more negative than he'd prefer, more focused on domestic policy and less freewheeling: Think of a Republican Hillary Clinton circa this year's Ohio and Pennsylvania primaries.

McCain surely would be more comfortable running a race emphasizing character, national security and a few pet causes such as earmarks. But he has to leave his comfort zone -- something he may resist because he labors under an outdated self-image.

McCain often seems to think of himself as he was back in 2000: a political phenomenon who was the fresh face on the national scene, beloved of the press. A conspiracy of circumstances -- most important, the passage of time -- has seen all his former star qualities (and then some) assumed by Barack Obama.

If this hadn't yet occurred to McCain, Obama's overseas trip -- with all three network anchors slavishly in tow -- should have brought it home good and hard. McCain's campaign was reduced to running a Web video spoofing the media's love for Obama, echoing a plaint once made about the sycophantic coverage of McCain.

But McCain still has been insisting on bantering with the press in sessions that recall the glory days of the "Straight Talk Express" eight years ago, even though he often distracts from his campaign's own message. His campaign can't afford such ramshackle self-indulgence in these, the most trying of circumstances for any Republican.

A McCain comeback has to begin in a deconstruction of Obama as too risky to be president, executed in a traditional, block-and-tackle campaign (of the sort McCain has never yet been able to run). The playbook is partly provided by Hillary Clinton, who found her voice in lunch-bucket appeals to working-class white and Hispanic voters.

She did not, of course, defeat Obama, but McCain ought to be encouraged by how close she came. She too was a plodding speaker, drew much smaller crowds than Obama and was outspent and out-organized.

For a contemporary Democrat, Hillary ran a center-right campaign; she talked of blowing Iran to smithereens, downed shots of Crown Royal and appealed frankly to blue-collar whites. These mostly substanceless gestures conveyed a sense of toughness that endeared Hillary to her working-class voters and highlighted a vulnerability of the polished but aloof Obama.

McCain has a higher natural toughness quotient than Hillary. But he has never spoken persuasively to economic concerns, which -- for all the focus on the Middle East -- will predominate this year. As Obama dazzled overseas, McCain's campaign made a feint toward frontally engaging him in the economic debate, hitting him with a negative ad on his opposition to domestic drilling.

It is necessary, but not enough, to take these kinds of shots at Obama. McCain's campaign needs a unifying theme, and one less abstract than "country first." Here again, he should take a page from Hillary, offering a conservative version of her occasional theme of a "fighter for you." In particular, he should be fighting for middle-class Americans against ineffectual government and tax-and-spend liberalism.

McCain has to give voice to the anger and frustration of the American public. He has to complain that Washington is broken and argue that both parties have let voters down. In 2000, he was the feisty -- even angry -- crusader against Washington and the status quo. He needs to find that old populist mojo again.

The fighter theme would tap into the public mood of disenchantment with Washington and politics. It would suit McCain, who is at his best when expressing an outraged irascibility. It would be in keeping with an aggressive anti-Obama campaign. And it would communicate a certain vigor, perhaps mitigating concerns about his age.

But it must be harnessed in a tight, hard-hitting campaign uncharacteristic of McCain. This year, simply letting McCain be McCain is a formula for failure.