Hillary: By Any Means Necessary 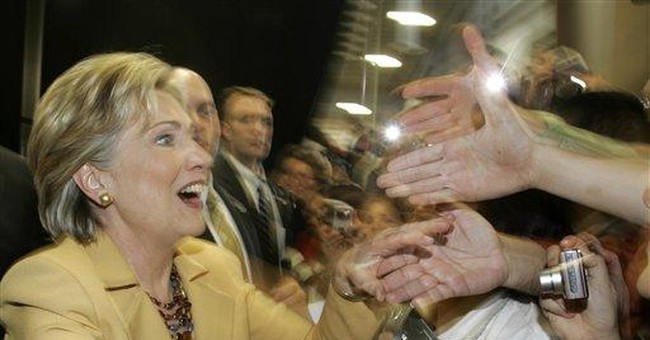 For two and a half months now, Democrats have been voting in primaries and meeting in caucuses to select their nominee for president. The last gasp of Hillary Clinton's campaign could be telling them, in effect, that they shouldn't have bothered.

Clinton trails Barack Obama among pledged delegates (by roughly 100), in the overall popular vote (by four points in states that were contested) and in states won (by about two to one). She could make up ground with convincing wins in the big states of Ohio and Texas in March, but she'll be hard-pressed even then to pull ahead of Obama, according to the analysis of NBC News' influential political tipsheet "First Read."

That leaves Clinton the appropriately graceless expedient of trying to find ways around the will of Democratic voters. Her campaign will, if necessary, push to have the Michigan and Florida delegations seated at the Democratic Convention. She won those states overwhelmingly -- because no one competed there. Candidates made commitments not to campaign in the two states that were stripped of their delegates because they advanced the dates of their primaries in defiance of party rules.

Florida and Michigan show that if only she hadn't had to run against anyone, Hillary might have a lock on this race. Or at least a lead: In Michigan, where she was the only major candidate on the ballot, she beat "uncommitted" by just 15 points. Her potential Florida and Michigan gambit raises the question of why anyone in the Democratic Party thought the Clintons would abide by an agreement. Obama is audaciously hopeful; Clinton is audaciously shameless.

Then, there are the so-called superdelegates. They are roughly 800 Democratic elected officials who can decide on their own which candidate to back regardless of the primaries and caucuses. Clinton spokesman Howard Wolfson says there is no difference between delegates chosen by voters and the superdelegates -- they are all delegates with a vote at the convention. True enough, except one tranche of delegates has a democratic legitimacy the other doesn't.

If the current state of the race holds, neither Clinton nor Obama will get to the 2,025 delegates needed to win through the primaries and caucuses. Both will need superdelegates to win. The difference is that Clinton might be asking them to ignore the explicit preferences of the public. Winning this way will throw up the loudest cry of "corrupt bargain" since Andrew Jackson lost to John Quincy Adams in 1824 in a contested election that went to the House of Representatives.

Of course, our political system is not designed to be perfectly democratic. Perhaps seasoned pols, the superdelegates, know best. But Democrats reflexively denounce any check on the naked popular will as tantamount to "disenfranchisement," especially of black voters. Already, Al Sharpton and NAACP head Julian Bond are arguing over how racist it is not to seat the Florida and Michigan delegations. If Clinton denies Obama the nomination despite losing the popular vote, she will open herself to inflammatory charges of disregarding black votes of the sort that she and her husband would eagerly resort to if circumstances were different.

Hillary herself was once a democratic supremacist. After the disputed 2000 election, she supported abolishing the Electoral College. "I believe strongly that in a democracy," she said, "we should respect the will of the people." At least until that strong belief ran up against her pursuit of a presidential nomination. "I hope no one is ever in doubt again about whether their vote counts," she said. This turns out to have been a wan hope.

Her attitude clearly is to win, no matter how, and worry about the repair job later. There's no benefit to her in being a graceful loser, since she'll probably never run again. And besides, she's not going to defer to a callow, two-year senator trying to deny her what she's rightfully entitled. There's only ethic that accords with her interests and her style -- by any means necessary.