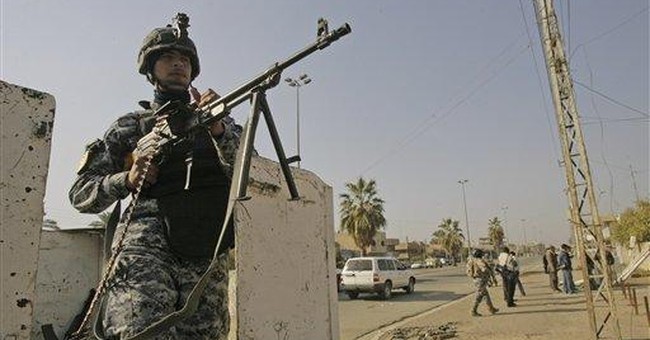 BAGHDAD, Iraq -- "Greeted as liberators" has become one of the most scoffed-at phrases of the Iraq War, a symbol of glib assurances of success belied by reality. But a top U.S. general here plays on the phrase in describing security gains during the past year. "In some ways," he says, "our soldiers have come to be seen as re-liberators."

The neologism seems apt in the crisp, cool dusk of a Saturday evening in a Sunni neighborhood here in the Dora section of this city.

American soldiers, who a few months ago couldn't venture here without being shot at, are mobbed by clamoring children as soon as they leave their vehicles. Stores are open on a street that was deserted just months ago. The median strip, once regularly implanted with improvised explosives, is spruced up with fresh brickwork. An American captain -- "the mayor" of the neighborhood -- is greeted by name by an Iraqi boy who runs up to shake his hand, and two women approach him to ask about being hired by the Iraqi government as teachers.

The neighborhood is a showcase of a counterinsurgency campaign that has emphasized securing the population and getting to know local players. "We live in the neighborhood," explains Col. Ricky Gibbs. "How did we get there? We moved to the sound of the guns." It took months of combat for his troops to roust al-Qaida and establish outposts in his section of the city. Once it became clear that the Americans weren't going anywhere, "the people came out in droves."

The Army has contracted with an influential (and very brave) local doctor-turned-businessman in the neighborhood for road repairs, trash pickup and electricity generation. All of which means local jobs. The doctor sounds like the U.S. general when he comments, "This is the second time you have liberated this country."

The question now is whether the enhanced security will harden into -- in a phrase the U.S. military uses often now -- "irreversible momentum" that will make the second liberation more enduring than the first, even as the U.S. begins to draw down the additional brigades of the surge.

It should be the Shia-dominated Iraqi central government contracting with people like the doctor. It can't (out of incompetence) or won't (out of sectarian motives). Worse, the doctor's brother has been detained by government security services without charge for months, even though the Americans have worked to have him released. "We've had an American awakening and a Sunni awakening," he says, referring to the surge and the Sunni turn away from the insurgency. "Now we need a government awakening."

The central government hasn't attempted to consolidate change bubbling from below. There are 80,000 mostly Sunni security volunteers seeking integration into official security forces or transition into civilian jobs. There are volunteer teachers -- like those petitioning the American captain -- who await government salaries. Yet the government has left billions of dollars in revenue unspent. Prime Minister Nouri al-Maliki has talked about creating a $1 billion jobs program, but even if he wants to follow through, moving such a sum through the dysfunctional Iraqi bureaucracy is a gargantuan task.

In the meantime, we fill the gap, in keeping with the military's axiom that "money is ammunition." The $300 a month we pay to security volunteers is filtering down into local economies. Commanders use discretionary funds at their disposal to contract for services and provide seed money for businesses. "I can't spend it fast enough," Col. Gibbs says. This so-called CERP funding will run out in the summer, and Gen. Petraeus is asking for $480 million more of it. Congress would be scandalously foolish to reject him.

Everyone acknowledges that Iraq's progress is fragile. The country is still violent, al-Qaida hasn't been totally vanquished, and the Shia south has its own alarming problems. But we have to try to capitalize on the opportunities created by the surge. There's not going to be a third liberation.