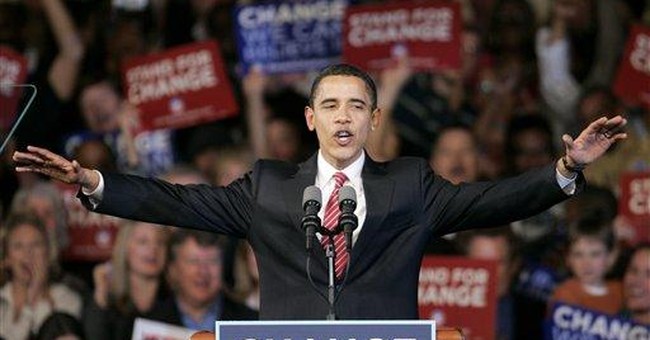 If he weren't constantly belittling Barack Obama in racially charged terms, Bill Clinton might regard him with a self-referential nostalgia: "That," he might think to himself, "is what I used to be."

In South Carolina, Obama trounced Bill Clinton -- and, it must be added, his wife, Hillary -- by running as a version of Bill circa 1992: a 40-something, charismatic heir to JFK, who talked of hope and offered change by transcending the tired politics of the past. Like Obama now, Clinton then recognized how transformative Ronald Reagan's presidency had been, and urged Democrats to learn from Republican success rather than deny it outright.

Within the party, Clinton represented a turn away from old-style Michael Dukakis liberalism. Obama now seeks to upend the Clinton ascendancy. With an overwhelming South Carolina victory fueled by revulsion with the Clintons' tactics, Obama is explicitly seeking to defeat Clintonism forever as a dominant force in national Democratic politics.

Long before Obama came on the scene, Democrats had tired of centrist-oriented Clintonian Third Way politics. The approach didn't survive Al Gore's campaign in 2000, when the vice president ran as a left-wing populist. John Kerry reprised Dukakis in 2004, and all the energy has been on the left of the party since then. Even Hillary has abandoned her husband's moderation on trade.

Obama reflects this return to liberal orthodoxy. What makes him different -- besides the historic nature of his candidacy -- is his stylistic contrast with the Clintons. He promises a politics that is more civil and straightforward, less partisan and bare-knuckled. Nearly every passage in Obama's stirring victory speech in South Carolina was a slap at the Clintons' hardball politics, framed in inspirational liberal terms. Obama might as well of intoned, "We shall overcome -- the Clintons."

Obama's is a liberalism without guilt. From the beginning, Bill Clinton's rise in the Democratic Party constituted a corrupt bargain. The party could take his political virtuosity, but only at the price of the spectacular personal failings that were already obvious even before he became the Comeback Kid. Now, 16 years later, the Clintons are offering the party a corrupt extension of the contract.

And parts of the party establishment are recoiling. Ted Kennedy, John Kerry and Tom Daschle are all with Obama. They have grown weary with the Clintons' "divisions and distractions and drama," as Obama put it in his victory speech, in a line ostensibly about the old politics. The Democrats put up with Clintonian triangulation and dutifully defended all his transgressions in exchange for victory, for eight years in the White House that no other Democrat could deliver.

That's the key element of the old bargain that Hillary can't necessarily hold up. She entered the primary race a dubious general-election candidate, and she seems weaker now, with her overreliance on Bill and his nasty shots at Obama. In between his fits, Clinton must wonder how he managed, after a career of courting blacks, to get himself on the wrong side of a racial dispute in the Democratic Party.

Obama promises a purer liberalism, without scandal and acrimony, and, on top of it all, electability. Why wouldn't Democrats jump at this deal? Because Obama isn't yet enough like the Bill Clinton of 1992. The blessing of Ted and Caroline Kennedy gives Obama even more of the aura of Camelot, a remote and shining liberal idealism. But Obama needs less of the haute cuisine of Olympian inspiration and more of the grubby cheese fries of Bill Clinton's emotional connection to economically distressed voters. Bill felt their pain, and -- a wonk at heart -- smothered them with proposals to revive the economy.

Hillary doesn't have the bond that Bill had with down-market voters, but she's been able to win them over with a workmanlike focus on the details of policy important to them. If she holds on to working-class whites, Latinos and women, she can still derail Obama and keep the party from embracing his alluring new deal.