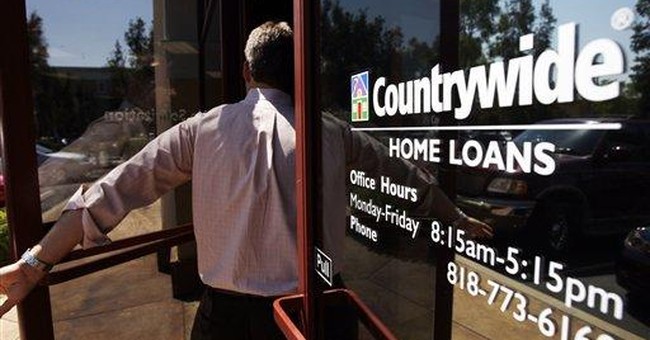 The housing market is caught in a downward spiral that might last the rest of this year, and banks are struggling under a staggering burden of bad loans that has created a severe credit crunch. Don't fear, though, a $250 check might be making its way toward your mailbox.

That's the economic "stimulus" that Democrats are coalescing around to forestall a recession. Barack Obama wants a $250 tax rebate and a payment of $250 to Social Security beneficiaries. If that doesn't work, he has a Plan B: sending out another $250 check. Hillary Clinton wants to try $70 billion in new government spending first, then, if the new tide of red ink fails, blanket the country with $40 billion worth of rebate checks.

With the White House considering its own rebate proposal, some such scheme is likely to emerge as the lowest common denominator of sophomoric economic policy for both parties.

A $250 check is the equivalent of winning a tiny jackpot on a convenience-store lottery ticket. It's not going to spur any lifestyle changes or fund any major purchases. This is why the history of the tax rebates -- including the last time it was tried in 2001 -- is a sorry one.

Most people aren't stupid enough to think a $250 check improves their economic standing. This is keeping with the late economist Milton Friedman's "permanent income hypothesis," which said that people don't change their spending habits based on small blips in their income. In short: You can't fool people into thinking that they are richer than they really are.

So it is that research shows that most of the 2001 tax rebates were used to pay down debt or were saved. According to a study by University of Michigan economists, only about 20 percent was spent. This was a tiny stimulus at best, and if it was spent on common consumer goods -- clothing and the like -- probably went to imports from overseas.

Despite its economic nullity, rebate checks are politically seductive to Democrats because they can be focused on low-income taxpayers, and to politicians of all stripes because they show government is "doing something." Never mind that they often are irrelevant to the problem at hand -- it was a slowdown in business investment that drove the 2001 downturn, and a credit crunch stemming from the housing crisis that risks creating one now.

It is the curse of capitalism that it suffers boom-and-bust cycles. In recent economic history, we've had the savings-and-loan bubble, the tech bubble and now the housing bubble. The lesson of all of them is that if it's too good to be true, it is. The blessing of capitalism is that -- often brutally -- it adjusts and re-establishes its equilibrium. If too many houses have been built, the only way to stop it is if their price goes down -- exactly what's happening now.

For the most part, government can't game the economy through clever temporary fixes. The key dishonesty in any stimulus debate is found in the phrase "jump-start," suggesting it's within the power of government to quickly and precisely influence the course of a $13 trillion economy. The Clinton campaign promises not just to "jump-start" the economy, but to "jump-start green-collar jobs." This is supposed to happen through a "crash weatherization program," tax credits for hybrid vehicles, and a "Green Building Fund" and "green-collar job training programs." Talk about a fairy tale.

Clinton is embracing the kind of massive stimulative public spending that her husband proposed in his 1992 campaign, before abandoning it as fiscally imprudent upon taking office. It turned out that the recession of the early 1990s was over even while Clinton was campaigning against it. That's the way it usually works -- the market moves faster than politicians.

By the time you get your rebate check, the chances are a recession will already be upon us, or the threat will already have passed. Enjoy the extra couple hundred bucks.