Rich Galen
|
Posted: Dec 19, 2017 12:01 AM
Share   Tweet
The opinions expressed by columnists are their own and do not necessarily represent the views of Townhall.com. 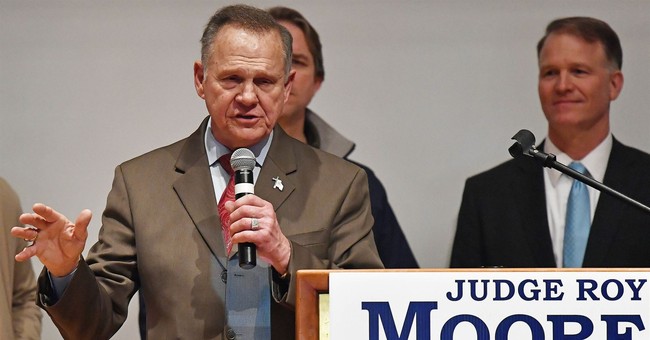 The special election for Senator in Alabama feels like it was held in 1817, not 2017 and certainly less than a week ago.

We briefly touched on some of the problems for Republicans losing a Senate seat in Alabama portends. I mentioned, in passing, that when you stack the Alabama result last week, atop the results in Virginia last month you see the GOP is heading straight for the rocky shoals of political insignificance.

I ran an outfit called GOPAC in 1998. GOPAC is known in modern political lore as being Newt Gingrich's PAC. That is - or at least was - largely true.

It was not founded by Newt. It was founded by Pete DuPont who was then the Governor of Delaware.

DuPont determined that the reason Republicans had such a hard time making gains in the U.S. House of Representatives was because we didn't have good, trained, experienced candidates to put on the ballot when an opportunity to pick up a seat presented itself.

Democrats had a lock on the U.S. House. From 1933 until the Gingrich Revolution in 1995 - 62 years - the GOP were in the majority only twice. In fact, when the Republicans organized the House in January of 1995, there was not a single sitting Member of the GOP in the House who had ever spent one day in the majority.

DuPont's reasoning was that we didn't have good candidates to put on the ballot for the U.S. House because we didn't have sitting members of the State House or State Senate in very many places.

We would go to a well-to-do lawyer, or banker, or some other professional and convince him - him - to put his name on the ballot.

Very often - almost always - he had no previous experience being a candidate for anything but chairman of the golf committee at the country club or commodore of the fleet at the yacht club.

Democrats, on the other hand, could find candidates who were mayors, sheriffs, members of the state legislature or any one of a dozen other elected offices. They knew what it took to organize a campaign, to raise money, to choose which issues to highlight and how to speak about those issues.

As that great American philosopher, Mike Tyson is quoted as saying: "Everyone has a plan 'till they get punched in the mouth."

GOPAC was a training academy for Republicans to learn how to throw - and take - a political punch.

It worked. Under the guidance of political guru Joe Gaylord, GOPAC slowly began to build up the ranks of Republicans in state capitals. They had a constituency. They knew the issues. They understood that politics was not an endeavor for the faint-of-heart and sometimes you had to, as a GOP consultant used to say, "turn mother's picture to the wall" and eviscerate your opponent.

So, come we now to 2018. The first Trump mid-term election. It is Democrats who are looking for candidates - office holders from school boards to state senate. Democrats are particularly looking for women candidates because men have little experience in running against women.

The grammar of politics is different. If I call my male opponent "totally unqualified for the job" it might generate a line in the Friday "political roundup" column.

If I call a female opponent "totally unqualified" it will be World War III for insulting, denigrating, belittling, insulting, and disparaging not just my opponent, but every woman, everywhere, since Eve.

I am not kidding about this. The National Republican Congressional Committee - the political arm of Republicans in Congress - should immediately begin a full fledged program of polling and focus groups to find out how best to run a campaign against a woman.

Worried about being tied to Donald Trump? Hah! Every Republican male will be tied to either Todd Aiken or Roy Moore or both. And Donald Trump.

Republicans better practice and utilize a new grammar of politics if they don't want to approach that number in 2018.