Rich Galen
|
Posted: Sep 11, 2017 12:01 AM
Share   Tweet
The opinions expressed by columnists are their own and do not necessarily represent the views of Townhall.com. 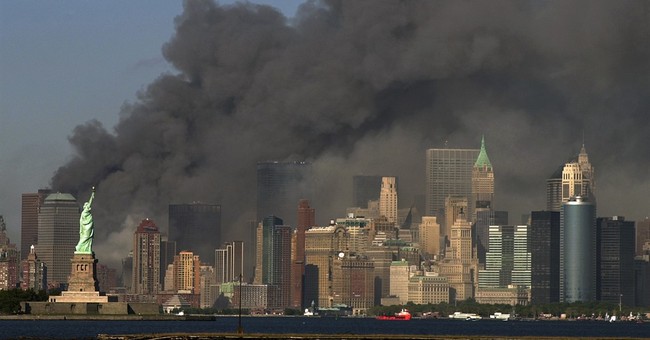 Sixteenth anniversaries are not noted.

Today marks the 16th anniversary of what has become known as 9/11. Say it in the United States and anyone who is old enough to remember the year 2001 knows exactly what you mean. And exactly where they were. And exactly who was lost.

This is a reprise of the column I wrote for the ensuing Saturday - September 15. It was about the President, George W. Bush, going to Ground Zero, draping his arm over the shoulders of a retired firefighter named Bob Beckwith, and through a megaphone told the crowd, some of whom had shouted that they couldn't hear him, "I can hear you! The rest of the world hears you! And the people - and the people who knocked these buildings down will hear all of us soon."

I thought, with two major hurricanes still draining into the Gulf of Mexico, with a crazy person running North Korea, and with Official Washington trying to figure out what Donald Trump will do next, it might be helpful to take a breath and remember a day that made us all proud.

Wars start with old men telling young men there is a great cause.

Young men run tell their young women they are answering the call.

In the movie "Gone with the Wind," Charles Hamilton says to Scarlett: "Miss 0' Hara! Miss 0' Hara, isn't it thrilling? Mr. Lincoln has called the soldiers, volunteers to fight against us." Then he says, "But it's war, Miss O'Hara! And everybody's going off to enlist, they're going right away. I'm going, too!"

And so, with the bands playing and the flags waving, the Scarlett O'Haras and the Charles Hamiltons embrace and she waves goodbye to her man as he leaves, depending upon where they are in history, on horseback or in a Humvee.

But soon the bands pack their instruments, and the organizers furl the flags, and the women go home to, again depending upon where they are in history, mind the garden, or run GM or Pepsico, or Germany.

Stephen Ambrose, in his gripping book "D-Day" makes the point that nearly all of the soldiers who went onto the beaches in the first wave were novices - they had not previously been in battle. Because experienced soldiers, knowing what they would be facing, might not have gotten off the boats.

Nor will a War on Terrorism be, we have already seen in excruciating close-up, like the Gulf War when the Army, Air Force, and Naval personnel drove through the sand, flew over the sand, or sailed abreast of the sand of the Middle East, while the rest of the country, in effect, hit out of the sand on the 16th hole of their country club.

President Bush, who was wrongly accused to ducking the whole thing on Tuesday afternoon, toured the ruins of the southern end of Manhattan Island on Friday afternoon.

He stood among the strong men and women, mud-splattered from digging in the rubble, hopeful and happy as their Commander-In-Chief stood among them; on a pile of the same broken concrete on which they have ripped their hands. He stood among them in a windbreaker. Speaking through a bullhorn. His arm was draped around retired firefighter Bob Beckwith the way men do when they are comfortable being around other men.

The workers were in hardhats of blue, green, white, yellow, and every other color of the spectrum. Some of them - perhaps many of them - may be soon trading those hardhats for black berets and olive drab helmets.

U-S-A! U-S-A! They chanted the way strong men and women do when they are standing among broken stones and broken bodies.

The firefighter standing next to the President was an older man. He was not stage dressing.. He had goggles and a respirator dangling from his neck. His helmet was not colorful. It looked like firefighters' helmets have looked, more or less, for generations: Black leather. Bill around back. Shield on the front: 164.

He could have stepped out of a Norman Rockwell painting.

But let us remember, as we proceed into this war, that there will be more days like Tuesday. Bad days.

And there will be more days like Friday. Good days.

Our job, then, will begin. Our job will be to stand, like 164: Seasoned. Proud. Knowing what they know, having seen what they have seen, and having been afraid of what they have feared.

When the bad days come, we who are like 164, will have the job of soothing the eyes, and softening the hearts. We, too, are ready.