Rich Galen
|
Posted: Sep 27, 2016 10:30 AM
Share   Tweet
The opinions expressed by columnists are their own and do not necessarily represent the views of Townhall.com. 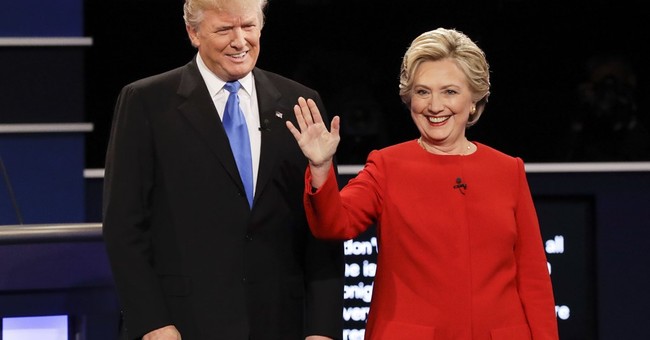 The pre-Debate questions more-or-less came down to these:

As the debate opened - with Hillary Clinton getting the first question via coin toss - she began by thanking Hofstra University and welcomed Donald Trump. She talked like someone who had read her briefing books and was comfortable with the material - jobs, and trade. "We are five percent of the world's population and we have to trade with the other 95 percent.

Trump was no less strident in his first answer about jobs to Mexico and dealing with China, but he was well schooled, at least in the early going, in keeping his voice under control the better to sound Presidential.

Hillary gently tweeked Donald by giving him a left-handed compliment saying he has been successful having been given a starter loan from his father.

Snide alert: Donald immediately took offense, at one point during his response calling her "Secretary Clinton" then looking over and saying, "Yes? That alright? I want you to be happy. It's very important to me."

Trump lasted about nine minutes before he felt he needed to respond to Clinton while Clinton was still speaking. Clinton was not thrown off. Obviously she had trained for that.

At 9:21 the gloves came off. Trump: "You called NAFTA the 'Gold Standard'." Clinton:"I know you live in your own reality…"

First Half Hour: Trump was now in full Trump mode both verbally and non-verbally. He continued to raise the rhetorical temperature. Clinton's voice rose in response as she strove to keep Trump from taking over the bet.

Trump recognized he was getting under Clinton's skin. She called out his remarks as "crazy" and Trump began to press the issue.

In response to Lester Holt's question about Trump releasing his tax returns, he spent two minutes explaining his being under audit, before he remembered the approved answer: "I'll release my tax returns when Secretary Clinton releases the 33,000 emails."

By the time he came back to that, Clinton had time to gather herself and went on the counter attack: "The only tax returns we've ever seen showed he paid no Federal income taxes."

At the 40-minute mark, Trump had his best riff talking about the U.S. having spent about $6 trillion in the middle east "which could have rebuilt America twice."

Clinton brought it back to working class - middle class - people by making the point that Trump has a reputation (which he did not refute) for "stiffing" the people who helped build his buildings. She accused him of having declared "business bankruptcy" six times. Trump responded by saying he used the laws as they exist.

He talked about the new Trump hotel on Pennsylvania Avenue as an example of his prowess. "If I don't get to Pennsylvania Avenue one way, I'll get there another way." That would be an applause line at a rally, but the audience - having been admonished not verbally react - stayed silent and the joke fell flat.

If my assumption as to what the two candidates needed to do are correct, then each of them probably got B- grades.

Trump's bluster wasn't overwhelming - he understood that there was a microphone in front of him and used it, for the most part to good advantage.

Clinton appeared to be close to losing her temper, or at least show irritation, but was clearly had control the material.

On guns, Trump wants to bring back stop and frisk (which was ruled Unconstitutional) but agreed with Clinton that people on no-fly-type lists should not be able to buy a gun.

At the one-hour mark, Lester Holt brought up the Birther issue, in the context of racial healing. Before he even finished asking the question Trump pivoted to Sidney Blumenthal and claimed credit for "getting [President Obama] to produce his birth certificate."

Clinton's response: "Just listen to what you just heard." She then used the birther issue to drive (an unnecessary) wedge between Trump and people of color. She didn't respond to the Blumenthal business, but reminded us that Trump was suit for racial discrimination in renting to Black people.

The Safety and Security segment began with cyber security. Clinton got to answer first and, again, demonstrated a knowledge of the material. She pointed out the Russians and reminded viewer of Trump's celebration of Vladimir Putin. She said that it proved he was unqualified to be Commander-in-Chief.

Trump countered with a list of endorsements by military leaders and Federal agents. He said we don't know if the DNC hacking was the work of Russia "or some 400 pound guy lying in his bed." He didn't respond to his man-crush on Putin.

Clinton's counter-counter on ISIS sounded weak to me - as if she had already fired all her arrows in her original answer and was groping for some way to fill the two minutes she had available.

Trump went right to "President Obama and Secretary Clinton created a vacuum by the way they got out of Iraq" which led to it being filled by ISIS, which is a riff he's used many times.

Trump's NATO position has evolved over time. He talked about the portion of NATO's budget that is paid for by the United States, but stopped well short of breaking up the alliance.

Way too much time was spent on whether or not Trump had supported the Iraq war which Holt kept saying he did and Trump kept saying he had not. He then turned on Clinton saying it was she, not he, that has a temperament problem.

Hillary Clinton is never so strong as when she is America's victim. As the debate ran down, Trump was getting very close to that line - maybe even crossed it.

On the temperament front Hillary said, "A man who can be provoked by a Tweet should not be trusted with the nuclear codes," which will make a pretty good sound bite.

At the 90-minute mark, Trump had hijacked the program by ignoring Holt's attempts to short circuit his long, rambling answers. Clinton didn't looked irked, but was left out of the discussion for long periods as Trump went on.

Clinton's best answer came right on the heels of Trump's filibuster. She made the point strongly how she would approach peace and prosperity here and abroad.

At the end, they were both running out of gas and turned on one another. When Trump was asked about saying Clinton didn't "look Presidential," he said "she doesn't have the stamina." Clinton came back with a long list of travel, negotiations, and international activities ending with "when he's testified for 11 hours before Congress, then he can talk to me about stamina."

Final scores? I think Hillary Clinton did nothing to harm her standing with her base voters and may have expanded that base with her strong understanding of the material and not (for the most part) rising to the bait Trump dangled throughout the program.

I think - putting aside the fact that he is abysmally rude - the strategy of tying Clinton to "the last 10 years" was a good one and he pressed it as an issue.

Will this move any votes? Hard to tell, but at a minimum it gave both camps something to crow about.