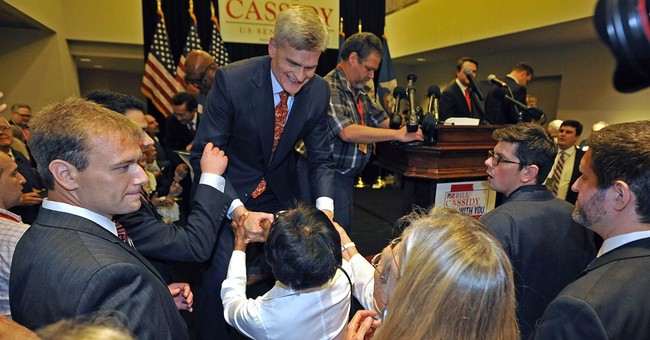 The election cycle of 2014, which seems like it began during the reign of Ethelred the Unready in about 963, finally limped to a conclusion in Baton Rouge Louisiana on Saturday.

Republican Congressman Bill Cassidy was declared the winner in the runoff for U.S. Senator from Louisiana by the Associated Press 30 minutes after the polls closed and 32 days after all the other races for U.S. Senate had been more-or-less decided.

He beat incumbent Democratic Senator Mary Landrieu by about 12 percentage points in a race that had all the nail-biting excitement of a T-ball Little League Baseball game.

Not so long ago, the geniuses that predict these things, believed that control of the U.S. Senate might well rest on the result of Saturday's election.

Barack Obama's leadership was deemed to have been so flawed for the past six years by the electorate that Republicans gained seats at every level of government in virtually every section of the country.

The Louisiana result was so not news that at 9 PM Eastern, I clicked through all the cable news channels and not one of them broke into their Saturday night programs to cover the race. The Washington Post, in the edition that showed up on my doorstep on Sunday morning, relegated the results to the bottom of page A2.

In addition to the runoff for U.S. Senate, there were two Congressional seats up for grabs.

Guess who won those? Republicans.

If you think that's not a shocking number, look at this map, via Politico, showing the distribution of Districts (in red) controlled by the GOP and those (in blue) that are held by a Democrat.

"It was the final major race of a 2014 election cycle in which Republicans won nearly every battleground Senate election, gained three governorships and at least 246 House seats. Democrats' efforts to localize many of these contests fell flat, and Republicans succeeded in making the election a referendum on the unpopular president."

As Nicolas Thompson of the New Yorker magazine Tweeted:

It has not been that long since Democrats controlled everything in the South from U.S. Senator down to Sanitation Director (if there is such an elected post). And, that had been the case for the better part of the past 100 years.

Republicans controlled the U.S. Senate after the election of Ronald Reagan in 1981 until the "Class of 1980" came up for re-election in 1986 when the Senate returned to Democratic control.

The point is, that for most of the past 80+ years (since the beginning of the Great Depression) political normality had Democrats in control of most of the levers of power across much of the U.S.

Will Republicans be able to maintain control for a similar period of time? That would take us to 2095 - near Zeger & Evans territory.

It is not likely if only because modern communications technologies make it much harder for a "Boss Hogg" to escape notice and run a community with little or no public scrutiny. Election laws - which were fought by Southern Democrats for decades - make it far easier for a citizen to cast an unchallenged vote.

The government's job is protecting their right to vote. Getting citizens to use that right is the job of the candidates.

Across the nation, and in Washington, DC, Republicans will be taking their oaths of office as Senators, Congressmen, Governors, State Reps and State Senators; County Commissioners and City Councilmen.

I pray they are up to the task.