Tears at the Open 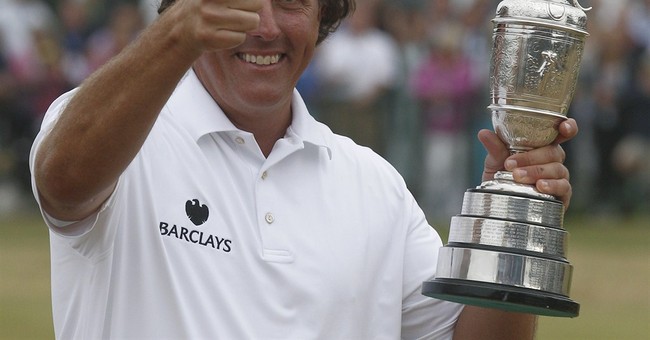 I don't watch golf very much unless it's nap time and there's nothing good on Turner Classic Movies. But I watched the British Open golf tournament -- which the Brits call The Open Championship -- over the weekend.

I am not a good watcher of events like golf tournaments. I tend to root for whoever's leading and, if they stumble, it takes me a while to cheer for whomever has taken over the lead.

That's why I used to be such at Tiger Woods fan. He won a lot, and most times when he broke into the lead he stayed there, so I expended very little emotional energy. Then he got clocked in the head with a nine iron, and his victories became less frequent.

I am not that way with local teams. I stopped rooting for the Redskins when they were purchased by Dan Snyder even though I've never met him. Nor had I ever met previous owner Jack Kent Cooke.

The Redskins have been mostly bad (96-112) since Snyder bought the team, but they did win the division with a 10-6 record last year with Robert Griffin III under center, so I may be softening on them.

I have rooted for the Washington Nationals since they came to town even though they were the worst team in baseball. I did not root for them two seasons ago after the geniuses in the communications office decided I wasn't worthy of retaining my press credentials, but I took them off my personal suspension list last year because I like having Major League Baseball in town, and I didn't want them to go to Dallas and become the Rangers or to Minneapolis and become the Twins like the last two MLB teams that played here.

I don't understand hockey, and I don't like pro basketball, so I am indifferent to the Capitals and the Wizards.

I was rooting for Lee Westwood through most of the final round because he was leading by as many as three strokes, and he's a local lad from Britain and all that.

Then he started missing puts and, like the leading bike rider in a stage of the Tour de France, got drawn back to the peloton (which is the main body of riders), and I knew I had to find a new person to root for.

Anyway, as Westwood began to make bogies, American Phil Mickelson began to make birdies, and soon he was leading and I had to decide whether to take the emotional step of hoping he would win.

He made more birdies, and it became obvious that he would win, so I started rooting for him.

The Brits claim that golf was invented there -- specifically at the Royal and Ancient Golf Club of St. Andrews in Scotland -- but it's not clear to me how they knew to name the place a "Golf Club" before golf was invented.

Anyway, Mickelson in 43 years old and had never won the British Open before and he is, as I am, left-handed, so I decided we are sort of buds even though I am 23 years older and couldn't hit a golf ball with a frying pan.

It is traditional that the leader of a major tournament walks up to the 18th green by himself to the cheers of the fans along the way. They doff their caps or visors and try to look like preparing to win the Open (or the PGA or the Masters) is the most natural thing in the world.

Phil Mickelson didn't do that. As he approached the green the announcers stopped talking, and the camera closed in on his face showing his reddened and moist eyes. As someone who cries at happy endings in coffee commercials to the point I make Speaker John Boehner look positively stoic, I am for this.

I was glad I had been pulling for Mickelson all the way.