From Livingstone, Zambia For the ONE Campaign 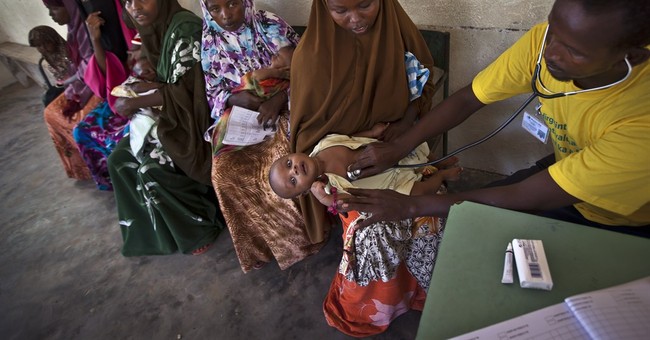 Don't email me. It's Livingstone with an "e." And the guy who found Dr. David Livingstone in 1871 was Henry Stanley from the New York Herald.

We are ending our week-long visit to Africa here, having spent the last two days in the Zambian capital of Lusaka.

One of the places we visited was the U.S. embassy where we chatted with Ambassador Mark Storella. He has been very active in his nearly three years here in the area of health care generally and HIV/AIDS in particular.

He said it was crucial that Americans understand how important their tax dollars are in helping not just to improve lives in Africa, but to "preserve society."

He said that HIV/AIDS had grown to over 16 percent prevalence in Zambia. But, due to the anti-AIDS program, PEPFAR (The President's Emergency Plan for AIDS Relief) introduced by President George W. Bush in 2003, and the enormous advances in anti-retroviral (ARV) drugs that rate has been reduced to a bit over 14 percent.

Dr. Jim McCauley of the Centers for Disease Control in Zambia said he was confident that at the next census that rate would be nearer to 12 percent.

Ambassador Storella said that there was a time when at the main women's hospital in Lusaka there were four casket makers on the hospital grounds, such were the number of deaths.

The day before we met with religious leaders who told us that they very often spent entire days going from funeral to funeral for people who had died of AIDS.

Storella said that if that rate had climbed to 25 percent society would have broken down and we have seen effects of broken societal rules.

He said he often goes out into the countryside and when he does he likes to visit the small clinics that are headed by lightly or untrained personnel. If he goes with a senior local official they are always surprised to find a computer stamped with the CDC logo, or a microscope with PEPFAR and a camera with a note that says USAID.

Americans, he said, have to understand that their money is not being wasted, it is doing a great deal of good, he said.

At that women's hospital we were shown that in addition to AIDS, African women have become prime targets for cervical cancer. But, over the past few years, when women have come to clinics and hospitals to be tested for HIV, they are also given a quick exam to check for cancer.

In its early stages cervical cancer can be treated on-the-spot by freezing the lesions with nitrous oxide. The total cost? About $16 US.

At that women's hospital we were shown a room (run by a young woman from Colorado, on a year-long fellowship paid for by the Barbara Bush Foundation) which housed four large flat screen TVs. These allow those lightly trained women in the rural clinics to send actual photos of women who present with lesions that may or may not be cancerous.

The director of the hospital, Dr. Sharon Mfula, told us she and the other docs in the capital can look at the photo of a cervix and advise the local practitioner on the best course of treatment. They are also using the system to better train those women out in the rural areas.

Dr. McCauley said that not only has telemedicine come to Zambia but the CDC-supplied computers are adding a skill set for rural women: Most of them had never even seen a computer before this system was implemented.

We met a woman, about 40, who had survived cervical cancer and is HIV positive. One of the major suppliers of ARVs is Mylan, Inc. a drug company headquartered just outside of Pittsburgh, Pennsylvania.

She was dressed in yellow; the women in our group were certain she had made it herself. She said she was "just a housewife" with two children and a grandchild.

She is alive because of the myriad goods, services, and people provided by the citizens of the United States.

And she knows it.

"We know what you've done for us," she said to our group of six Americans there through the offices of the ONE Campaign. "Thank you."

The Women's hospital proudly displayed a photo of President George W. and Laura Bush who were present for its opening.

Nearby at the Pediatric hospital there was a plaque stating that the ribbon had been cut by the President of Zambia and Secretary of State Hillary Rodham Clinton.

All in all, we saw the best that America has to offer the world.

I presume Dr. Livingstone, would have approved.