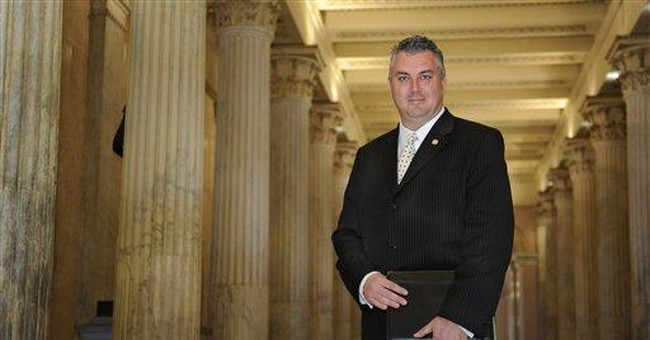 They live in Suffolk County which is on the eastern end of Long Island. From Old Town Alexandria to Suffolk County on a week night, with normal rush hour traffic is about a six hour trip.

With all the children who grew up on Long Island and now live in Manhattan or Brooklyn trying to make their way to their parents' house tonight, the trip could easily take over eight hours.

The Long Island expressway, on the first night of Passover, is God's way of reminding Jews about the whole 40 years in the desert after they left Egypt thing.

The Long Island Expressway is the ultimate equalizer. Doesn't matter how big your car or how much you make, you have to crawl along like everyone else.

Speaking of which, someone decided that it was a good story to write about the people who are paid to wait in line (or, as we say in New York, "wait on line") so that rich people can get a seat.

The issue at hand is the oral arguments in the Supreme Court on Tuesday.

There are only 50 seats available for the public during the arguments and, for reasons that are alien to me, 50 people want to go and be there.

For major committee hearings, lobbying shops routinely send junior staffers (second choice) or interns (first choice) to stand in the hallway outside the applicable committee hearing room to hold a place so that when the hearing begins and actual lobbyist can take his or her seat, catch the eye of a Congress member or Senator, then report to their client that the promised contact was made.

Standing on the marble floor of the Capitol or a warm House or Senate building is not the same thing, apparently, as hiring a line holder to stand or sit in the cold weather of a Globally-warmed Washington DC this past weekend where the high temperature didn't make it out of this mid-40's.

According to the New York Times, rich lobbyists with slicked back hair, Presidential cufflinks holding together monogrammed cuffs on custom tailored shirts pay up to $50 per hour to companies that specialize in line holders.

This, apparently, is a bad thing.

The Times' article quotes both former Congressman Barney Frank and current Senator Claire McCaskill talking about how this is just…just so unfair.

According to the Times piece McCaskill,

"Proposed banning the line-standing services for Congressional hearings, saying that lobbyists or wealthy people should have to stand in line like everyone else."

As if either McCaskill or Frank ever waited in any line for anything in their entire time in Washington.

What to have a fun time? Try to book a flight into Washington's Reagan National Airport on a Monday or out on a Fridays.

Want to know why you can't? Because the staffers in every House and Senate office book every possible flight out or back in and the airlines honor those multiple bookings because Members of Congress are the American version of the Politburo in the once and future Soviet Union.

Ms. McCaskill, because she is not the sharpest knife in in the Senate's cutlery collection, might not know that throughout the Senate side of the Capitol complex there are elevators that are reserved for Senators only. But they are.

On both sides, when the bells ring for a vote, regular American citizens are move aside - often by armed police officers - so that the House and Senate Members can go to the head of the line and have exclusive use of the elevators.

One of the reasons I was an early, and enthusiastic, supporter of the Tea Party movement back in 2009, was because I thought it was terrific that the members of the House and Senate who expected to be treated like princelings and princesslings in their home districts and states had to defend themselves against what is proving to be a really bad law: Obamacare.

I always know when a Member of Congress is in makeup when I get to the Green Room at a studio in Washington. There are two or three very serious staffers hanging around looking very important.

One time I was bearded by one of these geniuses when I walking into makeup when his boss was already in there.

"Who are you?" he demanded. "I'm the guy who's going to knock you on your butt if you don't get out of my way," I happily responded.

Spare me the holier than thou Members of Congress arguing that everyone should be equal in Our Nation's Capital.