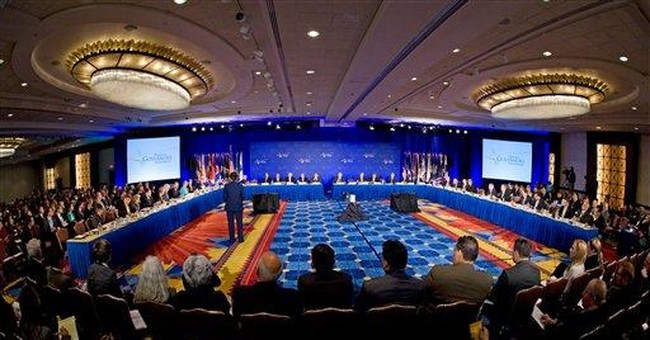 Happy 278th Birthday to George Washington. He was born in 1732 which means he was 57 when he was sworn in as the first President under the U.S. Constitution on April 30, 1789. Pretty old for the day, no?

Speaking of old, how tired are you of the Great Health Care Debate of 2009-2010 and Beyond? President Obama has invited Democrat and Republican leaders from the House and Senate to a meeting at Blair House on Thursday to discuss health care reform. The half-day event will be televised on C-SPAN.

I'd rather watch a three-hour Tiger Woods apology.

Anyone who was expecting a formal Oxford Union debate is going to be disappointed.

The President has made it clear that this is not in any way, shape, or form starting from a blank sheet of paper. It is part of a continuing process of attempting to recover from the disastrous start to this process last August when Democratic Members of the House and Senate ran into the buzz saws known as "Town Meetings" with no idea of what they were attempting to sell, and even less of an idea about how to handle the anger.

In the run-up to the meeting the Administration is scheduled to publish an amalgam of the bills adopted by House and Senate Democrats on the WH web page today.

On the Sunday talkers yesterday, Senate Minority Leader Mitch McConnell said the Senate Republicans would attend but said, "if they're going lay out the plan they want to pass four days in advance, then what are we discussing on Thursday?"

Not only is the President pre-selecting the discussion items, but the Democratic Leadership in the House and Senate has made it known that they are prepared to use the "reconciliation process" to shove a plan through the House and Senate as a budget item requiring a simple majority in each Chamber rather than the 60-vote gauntlet the legislation has had to run previous to this.

It is not clear to me how, by signaling Republicans that no matter what happens on Thursday, Democrats are prepared to torture the rules to shove through a plan they like will be helpful to the fiction that this will be an open and thoughtful debate.

Speaking of bonehead moves, whoever is the head of PR for Anthem Blue Cross (and/or its parent, Wellpoint, Inc.) should be forced to buy their own health insurance for not throwing themselves in front of the bus which was Anthem's recent announcement that it would be raising rates on Californians who have individual (as opposed to group) insurance by 39 percent beginning March 1, 2010.

Even assuming the rate hike is actuarially necessary, is the company in such bad financial condition that the announcement couldn't have been delayed a month or two until they had seen how the health care debate played out in Washington?

According to OpenSecrets.org the total Blue Cross/Blue Shield (which includes more than Wellpoint, Inc.) lobbying tab in 2009 was $22,715,439.

The House and Senate come back to work today following a week of snow days followed by a week of recess. What do you think the chances for success will be of a BC/BS lobbyist trying to get in to see a Representative or Senator in advance of the Thursday meeting?

If I were a Republican Strategist (which I used to be) and I had been asked what I thought the GOP should do (which I was not) this would have been my idea:

Have some 30-second TV and 60-second radio ads written and produced which simply and directly make the four or five points that the GOP wants in any health care plan.

Leave five seconds at the end for Republican Members of the House and Senate to put their "disclaimer" on it.

Have each Member - whether running for re-election or not - agree to buy some significant, but not exorbitant, amount of advertising in their District or State; and have the RNC make up the difference in states which have little or no GOP representation.

That would have allowed the Republicans to march up Pennsylvania Avenue to Blair House secure in the knowledge that, at a minimum, their constituents knew what they stood for - no matter what theatrics President Obama and the Dems throw at them on Thursday.

A Group Of Parents Sent Their Kids' Face Masks to A Lab for Analysis. Here's What They Found
Townhall
Washington Post looks into anti-blackness and transphobia in the Byzantine Empire to help us understand the roots of hatred
Twitchy
Vladimir Putin Asks NBC News Who Ordered the Assassination of Ashli Babbitt by the Capitol Police
Redstate
LOSING IT: Read Lori Lightfoot’s DERANGED Emails to Staff
PJ Media