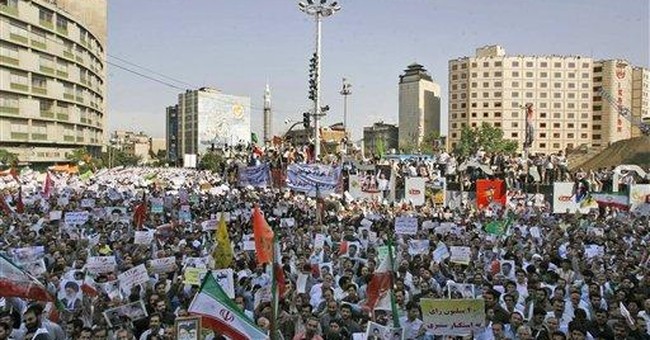 President Barack Obama is trying so hard, to be so cool in the face of Iranian internal brutality, that he is in danger of strengthening the hard liners in Tehran.

No one knows - or might ever know - who actually won the election for President of Iran last week. Current president Mahmoud Ahmadinejad might have, in fact, won re-election, but the Iranian government is certainly not acting like it.

Reporters - Middle Eastern and Western - closely covered the massive street demonstrations by supporters of the other two candidates, especially the man who is presumed to have been Ahmadinejad's closest rival, Mir Hossein Mousavi. Reporters covered the brutality of the Iranian police, military and the para-military basijis attacking demonstrators throughout the weekend.

Then, the Iranians changed the rules and forbad reporters from going out into the streets, while they shut down internet-based e-mail and web services.

The Obama Administration sent its most powerful voice on foreign affairs, Vice President Joe Biden, out on Sunday to talk about the Iranian elections. Biden stepped up to the plate by saying he had "doubts" about the announced outcome.

Oops. Off key again. Back to the bunker under the Veep's residence for you, Joe.

At a Rose Garden presser with the President of South Korea, Mr. Obama said, according to the BBC, "it is not productive, given the history of US and Iranian relations to be seen as meddling in Iranian elections."

So, it is only productive for the United States to meddle in the elections of countries with which we have warm and close relations?

Canada? Don't screw up. We'll come down on you like a defenseman cross-checking you into the boards at the the blue line in the seventh game of the Stanley Cup finals.

Well, it's all right then. Our President is concerned and all is well.

Meanwhile those who are really concerned - the actual Iranian people - found a way around the government shut-down of the Internet by turning to Twitter to send messages about what was going on.

Twitter has become such a big deal in supplying information internally and externally, that the U.S. State Department asked the message service to delay a scheduled maintenance shut-down so that demonstrators could continue to tweet.

Mullpal Air Force Col. Ken Backes has written a scholarly paper on the use of Twitter and similar services for exactly this kind of activity. There was no way for demonstrators to set up a central switchboard for sending an receiving messages, but Twitter provided a mechanism for spontaneous communications outside the reach of the government.

We'll see if this hands-off policy by Barack Obama emboldens the Iranian government and the ruling Ayatollahs.

A significant portion of the Iranian population isn't waiting. They're Twittering their pleas for support.