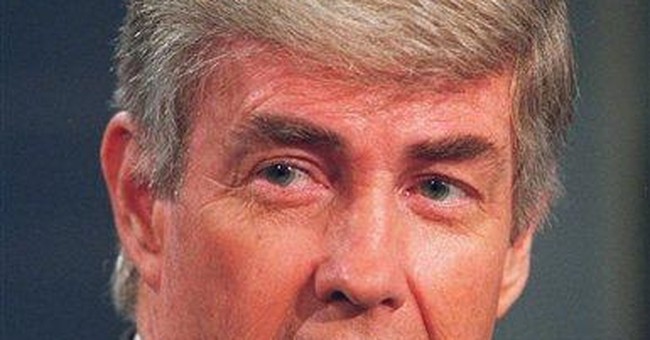 Jack Kemp died this weekend, but the ideas he fostered with unbounded energy deserve another look. Kemp was more than an adherent of supply-side economic theory. He was a zealot. But he was just as vocal about his support for minorities and the need for the GOP to connect with them.

The NY Times' Adam Clymer, who wrote the paper's obituary on Kemp which appeared Sunday morning, said yesterday that Kemp:

"was one of the strongest and most consistent voices within the Party of Lincoln for the need to listen to, and heed, the views and needs of people who would not necessarily be viewed as the base of the GOP."

In the obit, Clymer pointed out that Kemp had

"campaigned in New York for Nelson A. Rockefeller and in California for Ronald Reagan in their gubernatorial races; and for Richard M. Nixon and Barry Goldwater in their presidential bids."

Imagine the howling from talk radio hosts, and cable news hosts if a card-carrying member of the Conservative wing of the Republican Party dared to campaign for someone like Nelson Rockefeller today.

No one ever worked with, around, or for Jack Kemp and didn't have an opinion. Jack Kemp was a force of nature. No matter what the venue, he was fully capable of taking over the room.

During a holiday visit to the White House a few years ago, Kemp waited in the line to have his photo taken with the President and Mrs. Bush. The line went down a hallway then around the walls of a holding room before we got to the room where the photos were actually being taken.

On that occasion, when he got to the holding room, Kemp picked a chair in the middle of the room and held court, chatting happily with those of us inching our way through the line.

Jack Kemp was a fighter from beginning to end. He was anything but a shoo-in to be a professional quarterback. According to the Associated Press:

The Detroit Lions picked Kemp in the 17th round of the 1957 NFL draft, but he was cut before the season began. After being released by three more NFL teams and the Canadian Football League over the next three years, he joined the AFL's Los Angeles Chargers as a free agent in 1960. A waiver foul-up two years later would land him with the Bills, who got him at the bargain price of $100.

Kemp led the Bills to two American Football League championships and was voted the AFL's Most Valuable Player. Not bad for a guy drafted 203rd in the 1957 NFL draft.

Jack had an enormous heart and an unquenchable spirit for staying on offense. He lived life as a quarterback always seeking the next touchdown.

His greatest contributions in the 1970s were teaching the Republican Party to be idea oriented optimistic and committed to economic growth instead of devoted to austerity.

Only Ronald Reagan was more important in shaping modern conservatism.

As a Congressman from Buffalo, New York from 1971 to1989 Kemp's devotion to the idea that lower taxes would generate economic growth was put into practice by a Democrat-controlled House and a Republican-controlled Senate during Ronald Reagan's first term when tax rates were rolled back about 25 percent across-the-board.

According to a Joint Economic Committee of Congress report in 1996 looking back at what was known as the Kemp-Roth Tax Cut, the reason was "Lower top marginal tax rates had encouraged these taxpayers to generate more taxable income."

Even President Clinton's Council of Economic Advisers in wrote in a 1994 report: "It is undeniable that the sharp reduction in taxes in the early 1980s was a strong impetus to economic growth."