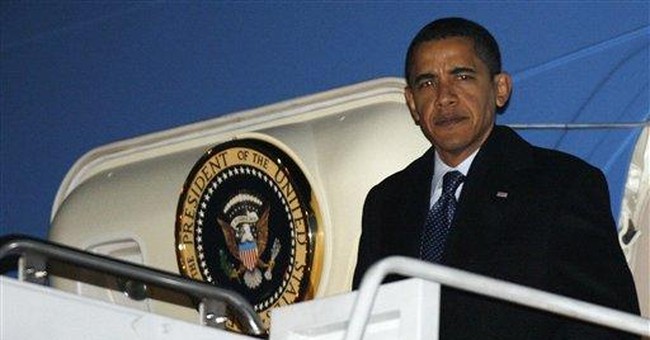 I know a little sump'n about traveling around Iraq. I know a LOT about travel from the Green Zone to the airport and back.

President Barack Obama showed up in Baghdad on his way home from his European tour. According to reports, he was supposed to helicopter from the Air Port …

Newsweek Magazine posted a piece by Bobby Ghosh which complained that the secret trip to Iraq was "straight out of the Bush playbook." Ghosh wrote that "Obama's main contribution to Iraq has been to criticize the war while on the campaign trail, and then to begin drawing down the U.S. troop presence as soon as he became President."

Nevertheless the Commander-in-Chief visits the troops and it's a good day for the troops.

The NY Times (which still maintains a bureau in Baghdad) reported that the President told a gathering of troops at what is known as "Camp Victory" which is within the same large protected area as BIAP:

"You have given Iraq the opportunity to stand on its own as a democratic country. That is an extraordinary achievement and for that you have the thanks of the American people."

I wonder why his writers didn't have him say, "You have my thanks and the thanks of the American people?" Maybe the writers did have him saying that, but …

Another thing: The President chose to wear a dark suit while meeting the troops. I can understand the suit if he actually had gone down to the Green Zone to have a meeting with the Iraqi civilian government, but once he realized he was staying at Camp Victory, I wonder why he didn't choose a more informal outfit.

Even just taking off his suit jacket and rolling up his shirtsleeves - which he has done pretty frequently - would have been better than looking like Prince Charles at a fancy dress ball.

The first time - the only time - I've ever shaken hands with Secretary of State Hillary Clinton was in the dining facility at the Palace in November, 2003. She was there for a visit when she was just a Senator. Not a Presidential candidate; not running for re-election to the Senate which wouldn't come for three years.

An Army Colonel told me once while we were in Iraq that "you get 95 points just for being here. You get your share of the last five depending upon your performance."

It meant a lot, Sen. Clinton being there. Just as it meant a lot, a few weeks later, when President Bush made his surprise Thanksgiving visit. I guarantee you it meant a lot to the young men and women stationed far from home to see President Obama, too.