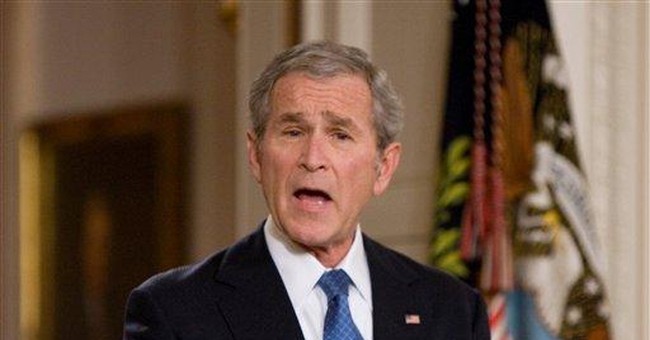 Last night President George W. Bush gave his final scheduled speech as President of the United States. At noon next Tuesday, a new President will take the oath of office and the peaceful transfer of power from one American to another will take place as it has 44 times before.

President Bush had been in office for less than eight months when the terrorists struck on September 11, 2001. Ten days later, a relatively untested President said of terrorism, we will "Stop it. Eliminate it. And destroy it where it grows."

The President threw down the gauntlet to the rest of the world saying, "You have a decision to make: You are with us, or you are with the terrorists."

And in that speech President Bush said, "Whether we bring them to justice or bring justice to them; Justice will be done."

If Barack Obama and his Administration does not unravel the safety net woven of intelligence, technology, military power and the will of Americans to prevent an attack, it will not happen on his watch, either.

So much time has gone by since those attacks that they are now shorthanded to "9/11" the same way we shorthand Alex Rodriguez to A-Rod and Jennifer Lopez to J.Lo. The brutal gash that the attacks left on our national psyche are reduced to "where were you when …" as we reach for the wine bottle at a dinner party, like people of my generation ask about the Kennedy assassination or my parents' generation asked of the attack on Pearl Harbor or the death of FDR.

September 11th is no longer central to our everyday thinking - unless we are trying to get on an airplane. It is just one more marker on the continuum of American history. Kennedy, FDR, Pearl Harbor, Black Monday, Fort Sumter, the Declaration of Independence.

The farther back we look, the more distant the markers become because only the most important remain. Time erodes the edges of the sorrow and blurs the images of the horror.

As the years passed, most Americans were able to return to life much as it had been before 9/11. But I never did. Every morning, I received a briefing on the threats to our nation. And I vowed to do everything in my power to keep us safe.

Perhaps in his memoirs, George W. Bush will tell us what he hoped to accomplish during his Presidency:

A new version of the Monroe Doctrine, perhaps? Raising the countries of Caribbean Basin as well as Central and South America to the social, political and economic level of their counterparts in North America and Western Europe? An overhaul of America's medical and pension systems so we could grow up and grow old knowing that if we lived well and worked hard we would be protected?

A do-over for America's primary and secondary education system? One in which we worry more about teaching children than about babying teachers?

We don't know what the original goals might have been because the goals shifted on September 11, 2001 and the President's principal goal was to "keep us safe." Every day. Every morning when he received the intelligence briefing. The threat report.

The President was not maudlin last night and he has not been during these final weeks of his Presidency. The other night I was honored to have been invited to a reception at the White House which included a photo with the President.

In the decades I have known George W. Bush - back to the days when we (incorrectly) called him "Junior" when his dad was Vice President - he called me Richie.

Until he was elected President. He never called me Richie nor, come to think of it, anything else.

When I was approaching the President for my photograph, introduced by the military aide as "Rich Galen" the President reached over, took my hand and said, "Richie! Thanks for everything you've done."

Back Atchya, Mr. President. Thank you for everything you've done.