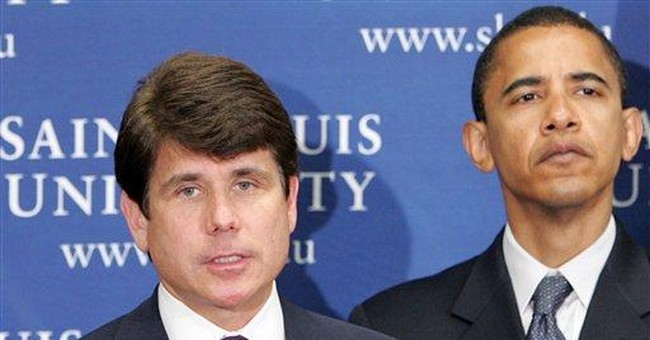 And, Governor bluh-GOY-uh-vich is a DEMOCRAT.

Here. Cut along the dotted lines and take it into work so you can be the smartest person at the Mr. Coffee Machine:

I mean, really. Who else provides you with this kind of service?

Ok, so old Democratic Governor Rod bluh-GOY-uh-vich has been under investigation by the U.S. Attorney's office in Illinois. In case anyone forgot who the U.S. Attorney is in that office, his name is Patrick Fitzgerald - of Scooter Libby fame.

We know, from painful experience, that Mr. Fitzgerald is the pitbull WITHOUT the lipstick of whom Gov. Palin spoke so eloquently at the Republican National Convention.

Dem-oh-crat bluh-GOY-uh-vich knew he was under investigation, but figured, what the hell. He's the Democratic Governor and he can pardon himself. Unless, he's under investigation by the Feds. Then only the President can pardon him and President Bush is not likely to do that in the next 40-some-odd days and President-elect Obama has notified one and all that he (a) didn't know Illinois had a Governor, (b) can't pronounce Blagojevich and (c) still has only the vaguest memory of ever having gone to any church which was overseen by Rev. Jeremiah Wright.

Democratic Governor (let's cut this short) B. was caught on wire-tapped phone calls trying to sell the U.S. Senate seat abdicated by Democratic President-elect Obama to the highest bidder.

He wanted the bidding to start at the $300,000 - $500,000 range. The money to be paid to his wife, MRS. Bluh-GOY-uh-vich who's maiden name was Mell (hello? You traded Mell for Blagojevich? You deserve what you get) for serving on corporate boards.

Pretty clever this (let's be even more efficient) Dem. Gov. B.

You might have thought that the attorney representing D. Gov. B. (I was going to shorten that even more to G. B. but I knew you would send me a cranky e-mail telling me that you thought I meant George Bush who is not a Democrat) would have been informed by Fitzgerald's office that he should present his client at the Federal building in Chicago or Springfield or wherever at 10 AM this morning for processing and, what with D. Gov. B. being a D. Gov. and all he would show up at the time and place required.

Not Patrick Fitzgerald. He should change his name to Patrick Giuliani. He sent the FBI to the Dem Gov's mansion at 6 o'clock in the morning and brought him out in handcuffs.

The judge, recognizing that a Democratic Governor named Bklxybzni#07vich was not much of a flight risk, set bond at zero and let him go. If D. Gov. B. doesn't show up he'll have to pay $4,500 although it is not clear to me how the government intends to collect the $4,500 if D. Gov. B. takes it on the lam.

Let's do a little survey of where in their stories certain well-known press outlets mentioned that Gov. B. is a DEMOCRAT:

-- Washington Post - never. Not once. In a 2,500 word story the Washington Post never thought it might be important, interesting, or even amusing to note that Gov. B is a Democrat.

And the lead paragraph would have been something on the other of: "Republican Governor Rod Blagojevich, close friend of President George W. Bush and a featured speaker at the Republican National Convention was this morning frog-marched out of the Governor's mansion …" Bail would have been set at $39 billion payable to GM, Ford and Chrysler.