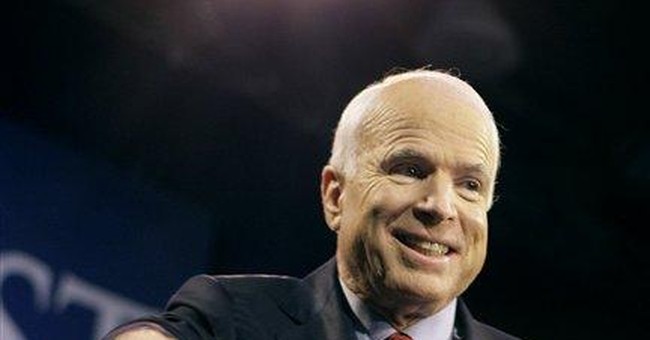 Using the Galen Theory of Poll Interpretation - throw out the high (CBS/NY Times) and the low (Investors Business Daily) and whatever is left is probably right - Obama is now leading McCain by about seven percentage points.

With the global financial system teetering on the brink of going back to trading in wampum and the War on Terror no closer to being won than it was in January 2002 and housing prices continuing to drop and unemployment continuing to rise and who-knows-what-else is going wrong … Obama shouldn't be ahead by 6.5 percentage points; he should be ahead by SIXTEEN percentage points.

Ok, so why isn't Obama ahead by double digits?

I think it's because the world is as dangerous as it is.

Think about Barak Obama not as a candidate for President, but as a race car driver. Which NASCAR team would give the keys to the car to a guy who has just learned to drive?

It is much more likely that they would send him back to the minor leagues for a few years of seasoning.

And it is very likely that American voters, before they pull the lever, fill in the circle, press the button or punch out the chad; will decide that Barack Obama needs some more seasoning before they allow him to take the tiller of the Ship of State and vote for John McCain.

So, a six-to-seven percentage point lead with three weeks to go is not enough for Obama to start looking at paint sample for the First Family Residence.

The Obama campaign is depending upon the jillions of young people - mostly college students - voting for the first time and voting for Obama.

If Republican voters fall into the trap being laid by the media that the Presidential race is over then Obama will win by default.

Not only that, but if Republicans give up on this election then down-ballot candidates will lose as well. Republican candidates for United States Senate, Members of Congress, State House and Senate, County Commission and City Council across the nation will be swept aside - not because they were not good candidates and not because they didn't perform well as incumbents; but because Republicans stayed home.

Left it to the Democrats.

Is that what you want? Me neither.

It is not a surprise to me that the CBS News/NY Times poll has Obama leading by the largest margin. I'm not suggesting they are lying, but it is not unknown in survey research to apply weighting to the results to affect the results.

If we allow the Coastal Elites to decide for the rest of us who will hold the reins of political power then we deserve what we get: - Obama as President - A 60-vote Democrat Senate Majority - A huge Democrat majority in the House - Two new Liberal members of the US Supreme Court. Don't like that? Then don't buy the Liberal hype. This race has three weeks to go and this is how it can be won:

It's just that easy.

For the next three weeks, work hard and keep the faith.