Hillary and the Super Delegates 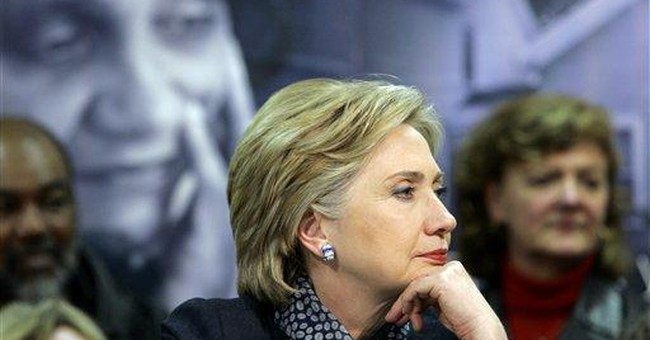 In the Democratic Party there are 796 "Super Delegates." These are men and women who are delegates to the Democratic National Convention in Denver by virtue of their position, not because they were elected in primary or chosen in a party caucus.

Officially, within the Democratic National Committee rules they are known as "Party Leaders and Elected Officials" (PLEOs) but Super Delegates stuck. PLEOs did not.

Mullpal Lanny Davis has reminded us that Super Delegates were never intended to be pledged to one candidate, but were the insiders who could undo a bad decision by those pesky voters in primaries and caucuses.

Yesterday, Mr. Davis (with whom I have appeared as a sparring partner many times over the past decade) pointed out that in an earlier age Democratic Party insiders chose as the Party's nominee Franklin Delano Roosevelt, Adlai Stevenson, and John F. Kennedy.

As we pointed out here on Wednesday, Barack Obama - following Tuesday's "Potomac Primary" has assumed the lead in the actual delegate count.

The way the delegates are awarded in these Democratic primarie, unless one candidate gets 80% of the votes the awards tend to be 54% to 46% one way or the other.

Thus, according to CNN's count, Barak Obama has 1,096 elected delegates (of the 2,025 needed) while Hillary Clinton has 977 - 119 fewer and that ration isn't likely to change much.

While Super Delegates have no requirement to support any candidate prior to the opening of the Convention, CNN reports Obama has the pledged support of 157 and Clinton has 234 closing the gap between them to only 42 delegates.

So long as Hillary Clinton stays inside of 405 delegates, the Supers can turn the tide.

But, they won't just swoop onto the floor and wrest the nomination away from Obama because that would cause a riot in Denver. Here's what they will do: You may remember that Michigan and Florida were stripped of their delegates because they ignored the DNC dictum that thou shalt not have a primary election earlier than February 5.

They did and Hillary won both.

The Clintons will arrange for their Super Delegates to reach down to the elected delegates who are members of the Rules and/or Credentials Committees over whom they have some control (If you are a sitting Democratic US Senator or Governor and you call an elected delegate from your state, that elected delegate will take your call).

The Super Delegates will instruct the elected delegates on those committees to seat delegations from Florida and Michigan proportionate to the votes Obama and Clinton received.

I guarantee you that the proportions will be just enough to give the nomination to Hillary.

Sending Lanny Davis out yesterday to begin the process of inoculating Democrats against Super Delegate skullduggery is only the first step. Between now and August there will be a constant drumbeat that Michigan and Florida cannot be shut out and the Clintonistas will be working the phones to be certain everyone knows their role.

On the GOP side, Mitt Romney's endorsement of John McCain (and the release of his delegates who are not bound under state law) will push McCain toward the 1,000 delegate number. On the Republican side 1,191 is the magic number to reach a majority.

Mike Huckabee, by refusing to leave the race, thus goes from running a quixotic and marginally heroic campaign against McCain, to being a laughing-stock or worse, a disloyal Republican.

Abbott and O’Rourke Clash in First and Only Debate
Townhall
Another Ron Klain boast (an attempted dunk on Trump) is aging like fine milk in the summer sun
Twitchy
WATCH: Jill Biden Shoves Joe off the Stage as Reporters Shout Questions
Redstate
Joe Biden’s Pettiness Just Got so Much Worse
PJ Media