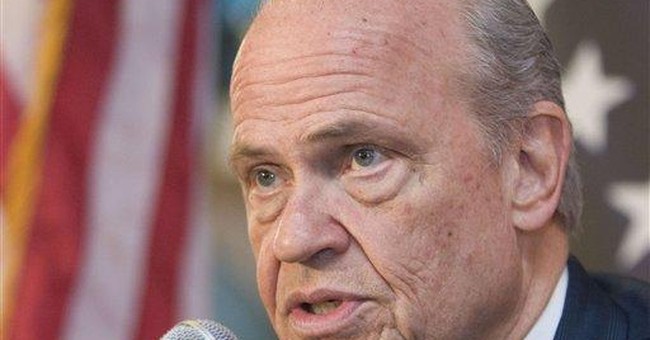 At about 2 PM Eastern yesterday, Fred Thompson made it official when he had the campaign press shop issue the following statement:

"Today I have withdrawn my candidacy for President of the United States. I hope that my country and my party have benefited from our having made this effort. Jeri and I will always be grateful for the encouragement and friendship of so many wonderful people."

Like the campaign itself, the statement was brief, unambiguous, and dignified.

At the time, I was having lunch Christine Byun. the ABC producer who had followed the Thompson campaign from the beginning. Our Blackberries began to wheeze and buzz at the same time with the news of the statement and we swung back into full work mode immediately: She calling her desk for instructions, me answering calls from reporters demanding to know why I hadn't told them in advance.

The answer was: I didn't know in advance. Fred Thompson is a private man who makes decisions on his own schedule. Following Saturday's third place finish in South Carolina, I was beset by calls about what he would do and when he would do it.

I had the same answer for all: You have a deadline to report his decision. He has no deadline on which to make it.

The next question I got was: Who will he endorse and when will he do it?

Thompson never got more than 16 percent of the votes in any of the primaries or caucuses, so his endorsement would not seem to be crucial to any of the remaining candidates. Nevertheless, two of them were gracious in their comments.

"Fred Thompson ran an honorable campaign. He and I will remain close friends, and I wish him and his family the best."

Mitt Romney responded to the news of Thompson's exit:

"Throughout this campaign, Fred Thompson brought a laudable focus to the challenges confronting our country and the solutions necessary to meet them. "He stood for strong conservative ideas and believed strongly in the need to keep our conservative coalition together."

Mike Huckabee, on the other hand, whined that Thompson should have gotten out of the race before South Carolina because "the votes that he took essentially were votes that I would have most likely had."

On NPR's "All Things Considered" yesterday when I was asked about that I mis-quoted Shakespeare: The fault, dear Brutus, lies not in our stars, or our opponents, but in ourselves.

Throughout the week leading up to the South Carolina primary, Thompson told reporters - and those of us on the bus - that he needed to do very well. He wouldn't specifically define "very well" but it was clear coming in third about 14 percentage points behind Huckabee didn't fit any definition.

Here's a tale out of school which describes the kind of man Thompson is: One day in the week leading up to the South Carolina primary the campaign office in McLean, Virginia asked if he would record a video thanking supporters for helping to have raised over a million dollars from the day after the Iowa caucuses to that point.

This video was obviously going to be a veiled pitch to send in more money - a point not lost on Thompson even though the script I wrote never mentioned it.

He told me he wasn't going to record it. Knowing we were facing an uphill climb to stay in the race, and knowing the video would tempt viewers to donate to help the campaign to go onto Florida and February 5th, he said, "I am not going to ask for money under false pretenses."

Throughout the campaign, when reporters enquired about Thompson's commitment to the race because of what Espo and/or Sidoti called his "laid-back style" I answered the same way: "If you're looking for a guy who is going to put on a Clarabell wig and a red nose and jump on stage singing show tunes, you've got the wrong guy."

It is strange that the qualities we are looking for in a sitting President - thoughtful, calm, and serious - are exactly the qualities which we penalize in those running for President.

It was a great ride. I'm sorry it's over.

Why Wall Street Is 'Losing Its Mind' Right Now
Townhall
'America LAST!' Black man who just lost his job thanks to 1 of Biden's EOs goes off in heartbreaking yet POWERFUL video (watch)
Twitchy
What Happened With GameStop, Reddit, and Some Wall Street Hedge Funds -- and What Might It Mean?
Redstate
The Morning Briefing: Sycophant Press Can't Cover for Biden's Opening Train Wreck
PJ Media