'This Plan Turns Our Economy Around' 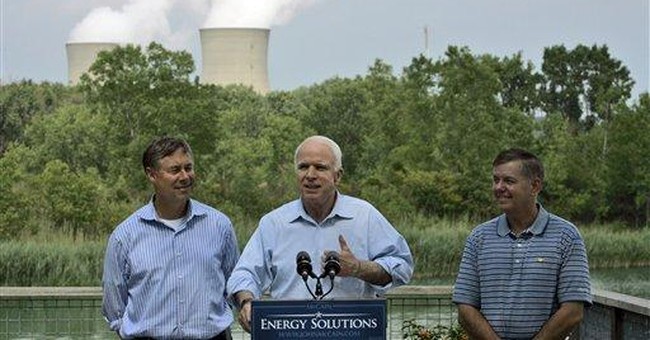 As they campaign for their respective party nominations and against each other for the presidency, senators John McCain and Barack Obama are talking a lot about the issue of energy.

Senator McCain is pretty close to the congressional Republican position, calling for an all of the above approach centered on more drilling. Senator Obama has changed his position to support some drilling, more for the purposes of legislative compromise, he says, rather than political expediency despite what might suggest otherwise: that poll after poll finds overwhelming public support.

Still though, neither candidate has offered the best solution to our energy challenges and our economic recovery; to get government out of the way.

Domestic economic activity can be immediately and effectively stimulated by unleashing government controls and opening the broad spectrum of the energy process — exploration, acquisition, processing and delivery — to all American-owned private enterprises for the benefit of all domestic consumers.

The increased domestic economic activity that would result means more jobs for America’s citizens, and within months, the housing market would bottom out and begin to rebound.

With more jobs available for those people, who want to work, the foreclosure rate would begin to recede, and the value of existing homes would stabilize, and then follow the uptrend of a rebounding economy.

Some of the new revenue flows to government could be directed to research on renewable and alternative energy, and while that research is conducted, we will be cultivating reliable and secure sources of energy that Americans can count on.

As a result, gasoline prices will drop further, home heating costs will turn down, and the cost of derivative products as well as the cost of food would drop.

Implementing this plan now would turnaround a domestic economy otherwise moving to recession. Americans would get both reliable, secure, traditional energy, sourced domestically and accelerated research for alternative types of energy rather than one.

This plan makes sense. We innovate and grow opportunity rather than stifle activity. And, we consciously avoid the conundrum of putting all our eggs in one basket, the way too many special interest types insist upon.

Also, when a venture proved successful, American citizens would be eligible to take a 50 percent credit against the applicable tax rate that would otherwise apply to profits for a specific energy enterprise investment. Mutual funds and other types of funds would not be eligible, nor would pass-though to fund-holders apply. Such a tax definition would help promote direct purchase of stocks by individual Americans.

This plan makes sense. That may be the biggest obstacle we have to overcome in order to implement it.

If there is a better plan that broadly addresses all existing and potential energy sources and types, let’s hear the specifics now.

America’s citizens have common sense. Now they have an economic plan that makes sense, too.