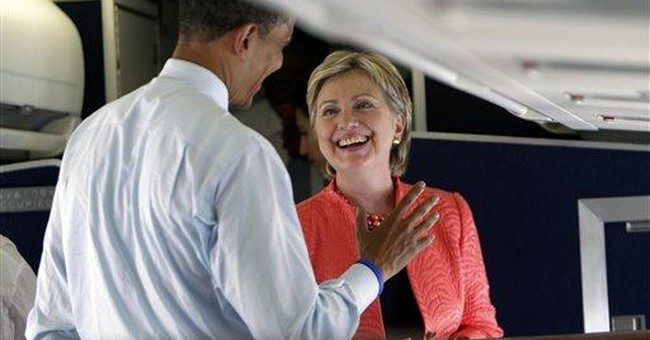 Barack Obama is running on a platform of Hope and Change™ but the only clear change seems to be in his policy positions. And the angry liberal base of the Democratic Party is left with the ironic hope that Obama is just doing what it takes to get elected. They have been wincing as the once unapologetic liberal attempts to morph into a safe and moderate centrist reversing himself on municipal gun bans, the death penalty, welfare reform, NAFTA, meeting with dictators, intelligence surveillance laws, and even his commitment to withdrawing troops from Iraq.

To the consternation of the Obama camp, however, the media have rediscovered their natural cynicism toward politicians who shift positions for electoral gain. Words like slippery, evasive, inconsistent, and even flip-flop have surfaced. When criticisms mounted surrounding his changing positions on Iraq it became clear it was time for Obama’s reflexive response to a buildup of bad press: a big speech.

When the toxic sermons from his former church threatened to derail his campaign he gave a speech on “Race in America.” He conveniently avoided the original issue, his relationship with Wright, but the speech was lauded by a swooning media.

Next up was questions surrounding his patriotism. There were a lot of questions bouncing around: why didn’t he wear a flag pin? Why did he start wearing one again if they were an example of false or easy patriotism? Why did his wife say in that watching him run for president she was proud of her country for the first time? How could he be a friend and colleague with an unrepentant terrorist like William Ayers who stands on the American flag? So once again Obama took to the stage for a big speech.

Like his speech on race, Obama’s “patriotism” speech contained some worthwhile sentiments but avoided answering the very questions that prompted it. There was no explanation for his convoluted answers about wearing the flag pin. He deplored the sixties radicals who had attacked America but never explained his relationship with Ayers. He praised those who serve in the military, and rejected those who question their service, but failed to explain why his surrogates – nearly a dozen by now - have developed a pattern of doing just that to John McCain.

No sooner had he given that speech, however, than a new controversy emerged when Obama spoke of “refining” his position on the war in Iraq. Was Obama preparing to shift to the center as he had on countless other issues? Was he going to abandon his strident anti-war position in the face of persistent evidence that the surge was in fact working?

The supposedly masterful rhetorician struggled mightily to achieve a consistent understandable answer. After two hastily called press conferences no one seemed sure exactly what he meant. And so it was back to the big set speech; this time accompanied with an Op-Ed in the New York Times.

And once again Obama managed to avoid the original issue and attempted to pretend it was all just one big misunderstanding. Obama claimed that he always knew the surge would work, on a tactical level, despite having opposed it and promised that it would fail to bring an increase in security or political progress. He shamelessly pivoted from “the war is a lost cause and we must get out” to “we are winning so we must get out.”

Just like in all his other major speeches Obama sought to change the subject and erase his contradictory and confusing answers. He declared the war a distraction from the real battle in Afghanistan. He continued to ignore the strategic ramifications of the growing progress in Iraq, and the folly of giving up now, even as he grudgingly admitted to some success.

Caught between the strident anti-war position that helped him win the primary and the clear changing of facts on the ground Obama once again waffled and insisted he was perfectly consistent. This was just one more attempt to rewrite history and his record. This time, however, it is not about his offensive pastor or the wearing of a flag pin, but about a central national security question. That should trouble even his most ardent supporters.

In his speeches Obama often touts his faith in the wisdom of the American people. But his actions in this campaign indicate that what he is really counting on is their short term memory.

This may be a successful short term electoral strategy, but it is a shallow and dangerous one in the long term.